DHBC Basketball back in full swing after one-week break 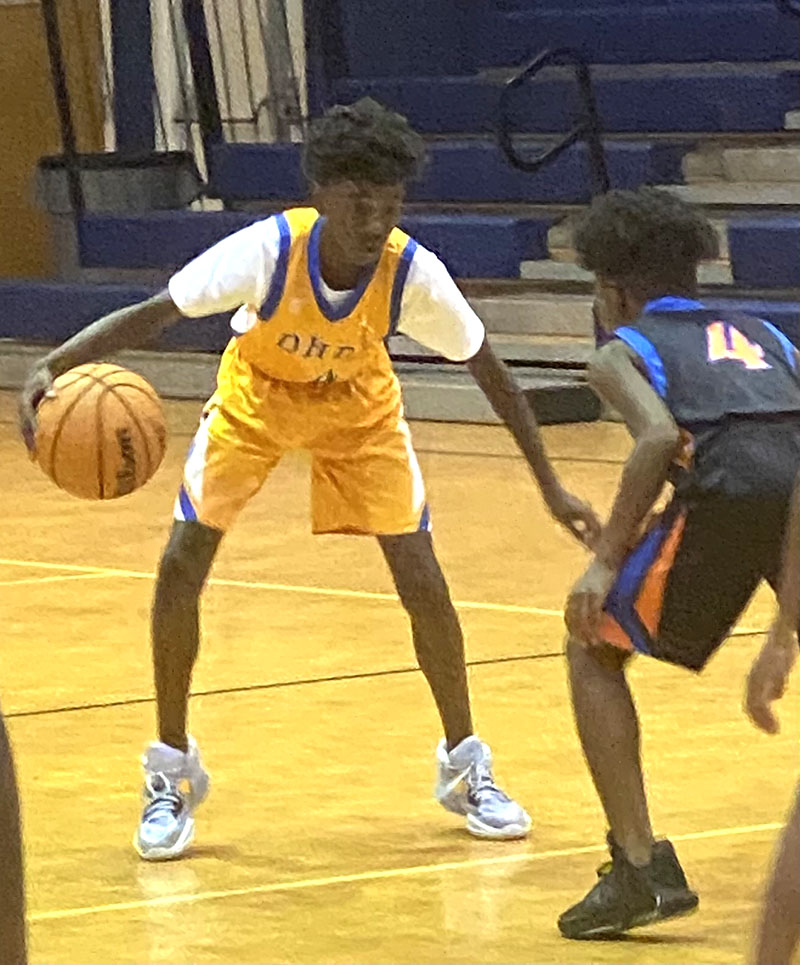 Jaden Galloway of the 11U Warriors scored 21 points and drilled three-three-pointers to lead his team past the Suns. Photo by Ken Gustafson

However, the scoring picked up early in the second half and the Warriors got to within one at 25-24 when Galloway knocked down another three-pointer. However, the Suns responded with a 6-0 run to take a 31-24 lead with a little over 12 minutes left in the game.

With 5:13 left to play and the Warriors trailing 32-28, Galloway drained another three-pointer to bring his team to within one. Shortly thereafter, however, the Warriors were whistled for a technical foul and the Suns’ Chaston Green made both technical foul shots to put his team up by three at 34-31 with a little over three minutes left.

However, the Warriors responded with a 4-1 run to tie the game at 35-35 and would then take a one-point lead on a free throw by Galloway.

The Suns didn’t go away though, as they would take a 37-36 lead on a basket from Green, but the Warriors would have the final say, as Galloway would give his team a 38-37 victory on a jumper with five seconds left.

Galloway led the Warriors with 21 points, including three three-pointers while Green led the Suns with 15 points with four three-pointers in the losing effort. 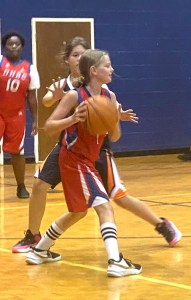 Charlie Spann of the Girls’ 12U Mystics with 12 points in their win over the Aces.
Photo by Ken Gustafson

The next game featured two teams from the Girls’ 12U Division; the Aces and the Mystics. Though the Aces put forth a strong effort throughout the contest, they were overmatched by the Mystics and were defeated by the score of 36-5.

Scoring was at a premium in the first quarter, but the Mystics maintained a 6-0 lead.
As the first half continued, the Mystics continued to hold the Aces scoreless while they built their lead to 11-0 on two made foul shots by Charlie Spann.

Throughout the first half, the Mystics pressed the Aces full-court and made it difficult for them to get into any offensive rhythm. As a result, the Aces were held scoreless for the remainder of the first half and trailed 15-0 at halftime.

It took until around the five-minute mark of the third quarter, but the Aces finally got on the scoreboard when Dondrea Ingram drilled a three-pointer. However, the Mystics continued to dominate and cruised to a 36-5 victory.

Charlie Spann led the Mystics with 12 points and Annalise Britt scored 11 in the winning cause.

In the third game of the night between the Bucks and the Heat in the 14U Boys’ Division, the Bucks jumped out to a 14-7 lead. However, the Heat fought back and tied the game at 14-14 on layup from Lance Jordan. 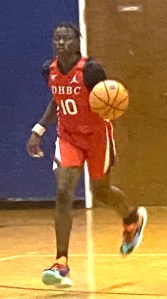 A.J. Myers pushes the ball up the court for the 14U Heat. Myers scored 17 points to help lead the Heat to victory.
Photo by Ken Gustafson

During the remaining minutes of the first half, both teams battled in a back-and-forth affair, but the Heat maintained a 23-21 lead at the half.

Over the next several minutes, both teams traded baskets, but the Heat had a 45-44 lead with a little over four minutes left. At that point, however, the Heat went on a 4-0 run that was capped off by a three-pointer by A.J. Myers.

With a little over a minute left, the Bucks trailed 49-46 and were able to get to within a point on a basket from Jaden Goober. They would later get a stop and would have a chance to take the lead with under 10 seconds left. However, Shadrick Robinson’s shot attempt was off the mark and the Heat went on to score a 50-48 victory.

Lance Jordan led the victorious Heat with 16 points and Jaden Goober led the Bucks with 11.

In the final game of the evening between the Wings and the Aces in the 17U Girls’ Division, the Aces jumped out to an 18-2 lead in the first quarter. This explosion would set the tone for the rest of the game. The Wings did make a run in the first half to pull themselves to within 10 at 24-14, but they were not able to climb all the way out of that early hole they dug themselves in. As a result, the Aces went on to win 45-32. 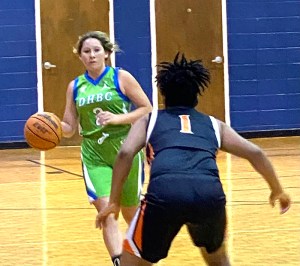 Alyssa Godwin directs traffic as the point guard for the Girls’ 17U Wings squad.
Photo by Ken Gustafson

Kelli Bishop led the Aces with 17 points and Lauryn Lusane scored 16 to lead the Wings.
There are two weeks left in the regular season before the DHBC playoffs start on Wednesday, July 27.