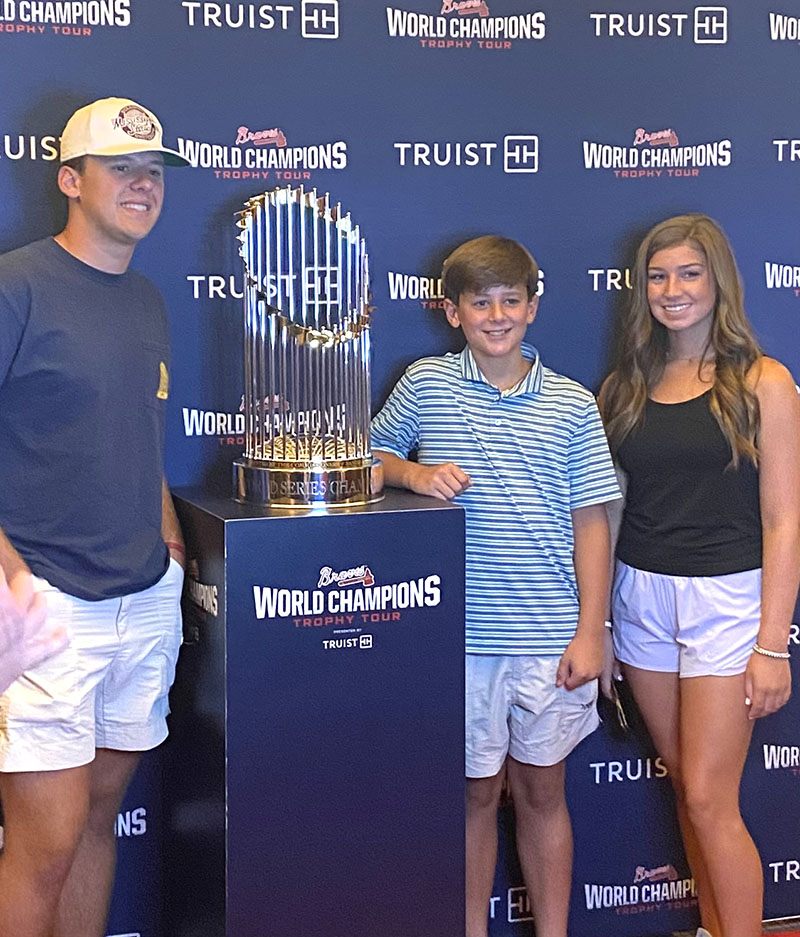 AMERICUS – On Sunday afternoon, July 24, The World Champions Trophy Tour made its stop in Americus at the Rylander Theatre where hundreds of people gathered to see and to have their pictures taken with the trophy in all of its splendor.

The Atlanta Braves are taking the 2021 World Series Trophy on tour to 151 stops across the Southeast as a way to commemorate 151 years of Braves Baseball.

The World Champions Trophy Tour, presented by Truist Bank, hosted the stop at the Rylander Theatre on Sunday, where from 2 to 5 p.m., fans got to see the trophy up close and got their pictures taken with it. As has been and will be done at each tour stop, items were given away and people got an opportunity to win a VIP sweepstakes experience to Truist Park to see the Braves take on the New York Mets on Saturday, October 1. 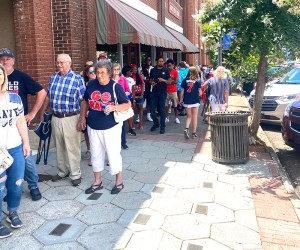 There was a long line of Braves fans that backed up to the Habitat Building. These fans waited in the stifling heat for a chance to go inside the Rylander Theatre and have their pictures taken with the 2021 Atlanta Braves World Series Trophy.
Photo by Ken Gustafson

For three hours from 2 to 5 p.m. in the sweltering heat, the long line of Americus Atlanta Braves fans stretched back to the Habitat Building as they all eagerly took advantage of the opportunity to see up close the coveted trophy and to get their picture taken along side a piece of sports history.

According to Heather Stanley, Managing Director of the Rylander Theatre, Braves fans from here and surrounding areas began to show up at noon and a long line that backed up to the Habitat for Humanity building formed as hundreds of people gathered in the sweltering heat for a chance to go inside the air conditioned theatre for their chance to have a picture taken with the trophy. 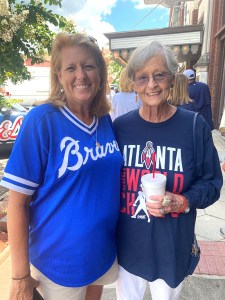 Jollie Ledger (Braves jersey) and her mother, Ellen Burgamy (right) wait in line in the sweltering heat for a chance to have their picture taken with the 2021 Atlanta Braves World Series Trophy.
Photo by Ken Gustafson

Sunday’s presentation of the 2021 Braves Wo4rld Series Trophy was the last presentation to take place in South Georgia, as it continues its stop through 151 cities and towns throughout the Southeast.

One of the dedicated Braves fans in the line waiting to get in was Jollie Ledger. Sporting her Dale Murphy uniform from the 80s, Ledger, like many long-time Braves fans, lived through the sweet memory of the 1982 Braves team that captured the National League West Pennant, but also lived through the rough years of the mid to late 80s, which for her, made getting to see the Braves World Series Trophy even more special. 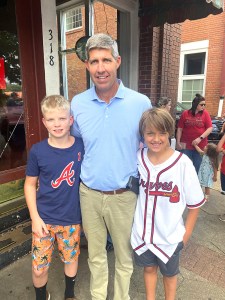 Adam Graft (middle) and his son, James Graft (right) and nephew William Coble (left) wait in line to go in to have their picture taken with the 2021 Atlanta Braves World Series Trophy.
Photo by Ken Gustafson

Adam Graft, the owner of the nearby Leatherbrook Holstein Dairy Farm, was also in line to see the trophy. He had with him his son, James Graft, and his nephew, William Coble. Like all die-hard Braves fans, Graft fondly remembers the Braves’ first world title in 1995. “I was in high school during the 1995 World Series,” Graft said. “The Braves we’re really good in the early 90s. During my high school days, I spent time watching the Braves. After their last 20-year slump, we’re glad to have a winning team.” 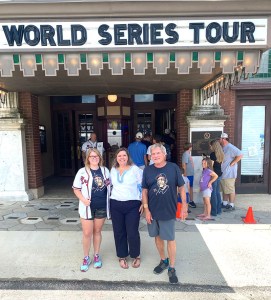 The Bell Family came up from Albany for their chance to get a picture taken with the trophy. Left to right: Laura Bell (daughter), Beth Bell (mother) and Walter Bell (father).
Photo by Ken Gustafson

Walter Bell, who lives in Albany, brought his wife and daughter up with him to see the trophy. Bell is a great, great grandson of Thomas L. Bell, who built Thomas Bell Stadium on the campus of the old Americus-Sumter High School. “I’ve been waiting 25 years and before that, forever,” Bell said. “We watch every Braves game. We love it. I hope they get another one n my lifetime, but I’m pleased. I’m good,” Bell continued. 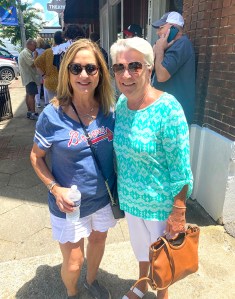 Life-long Braves fan and Americus native Jan Harrell (left) is with her new neighbor Trish Rioux, who recently moved to Americus from Maine. Both are waiting in line to see the 2021 Atlanta Braves World Series Trophy.
Photo by Ken Gustafson

Jan Harrell and her neighbor, Trish Rioux, also braved the sweltering heat to stand in line to go in and see the trophy. Harrell has been a Braves fan all her life, but Rioux, who recently moved here from Maine, has been a life-long fan of the Boston Red Sox and other New England sports teams. “She’s a Boston Red Sox fan and I’m turning her (Rioux) into a Braves fan,” Harrell said. “It’s awesome. I didn’t think this would happen. I just wish my son was here to see it. He’s out of town, but he went to one of the World Series games. That was the gift we gave him for his graduation from college: a ticket to the World Series,” Harrell continued. 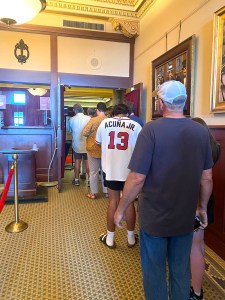 Braves fans file into the Rylander Theatre to have their pictures taken with the 2021 Atlanta Braves World Series Trophy.
Photo by Ken Gustafson

Tony Smith was also in line to get in to see the trophy. He had been waiting for this moment since 1966, the year the Braves moved to Atlanta from Milwaukee. “I’m in line in 90 degree weather to get a picture made, so it’s just absolutely great,” Smith said. 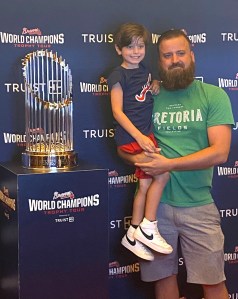 Windham Towson holds his son Hawk as they have their picture taken with the 2021 Atlanta Braves World Series Trophy.
Photo by Ken Gustafson

Not only were there local folks here to see and get a picture with the trophy, several people from out of town came here to see it as well. 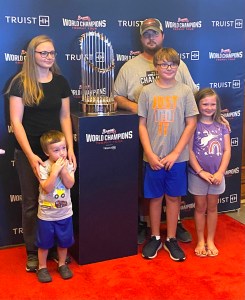 Thomas Woodward came down from Columbus to see the trophy in person and to get a picture taken with it. “I’ve been waiting since 1995, since the last time…. really since my grandfather passed away about 20 years ago,” Woodward said. He went on to say that he is extremely happy to see the Braves finally win another World Series. “For me, it’s been such a long wait, a lot of ups and downs, pretty much a bad whole 10 years of the Braves. It feels like a lot of fans really got lost. It’s really good to see that all of the entire Southeast is coming together, really rallying behind, becoming Braves fans again,” Woodward said. “For me, it’s more about the culture enhancing around our Columbus area and really the whole Southeast,” Woodward continued. 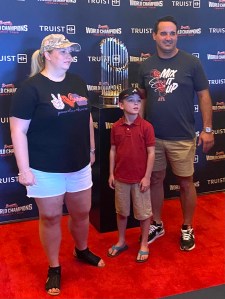 Rachel Dewberry was another fan who waited in line in the sweltering heat for a chance to get a glimpse of the trophy and a picture with it. “I think it’s amazing. I do. I really do. I think it’s so exciting…a once in a lifetime opportunity,” Dewberry said.