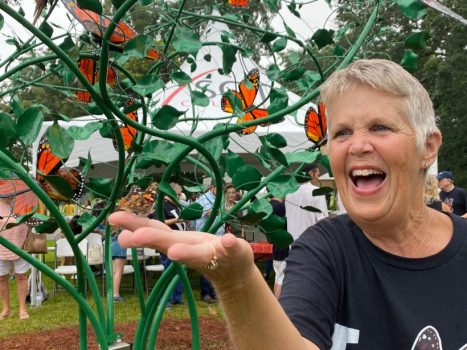 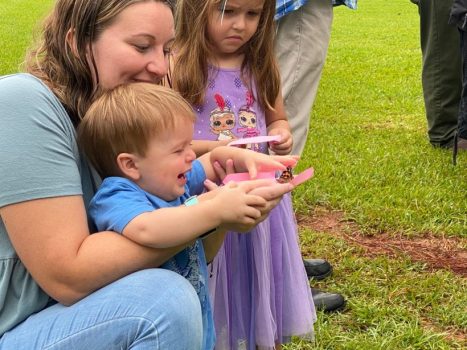 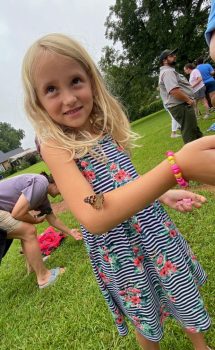 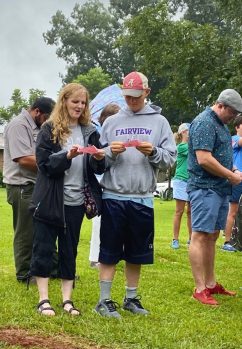 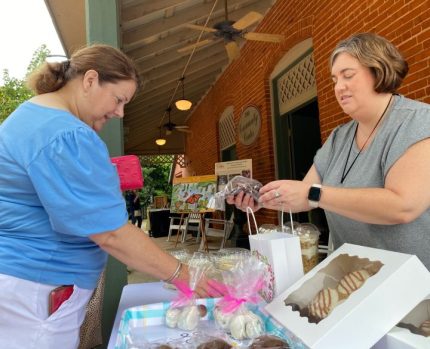 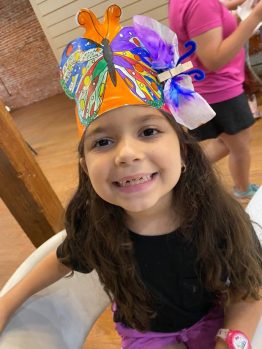 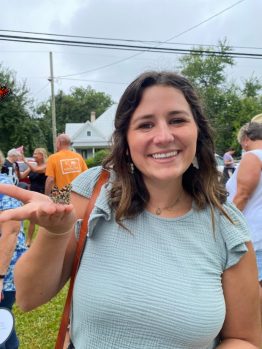 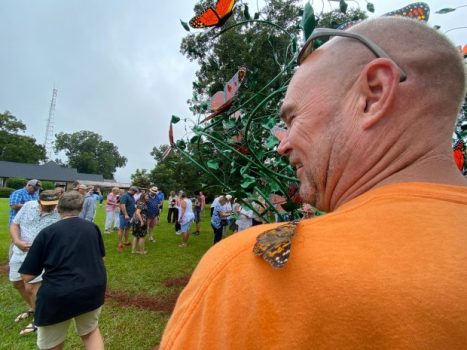 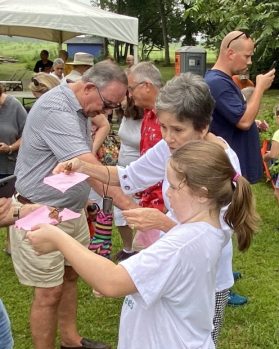 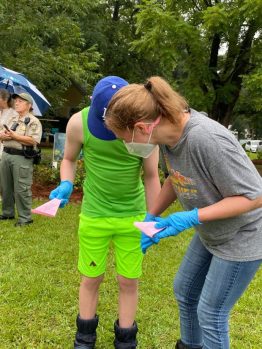 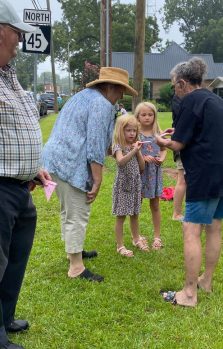 Photos by: Nichole Buchanan To celebrate Rosalynn Carter’s birthday, Plains held a public dedication of "The Monarch Tree" by renowned artist Peter Hazel. The sculpture is located in the new garden site on Rosalynn Carter Trail. The dedication ended with a butterfly release. 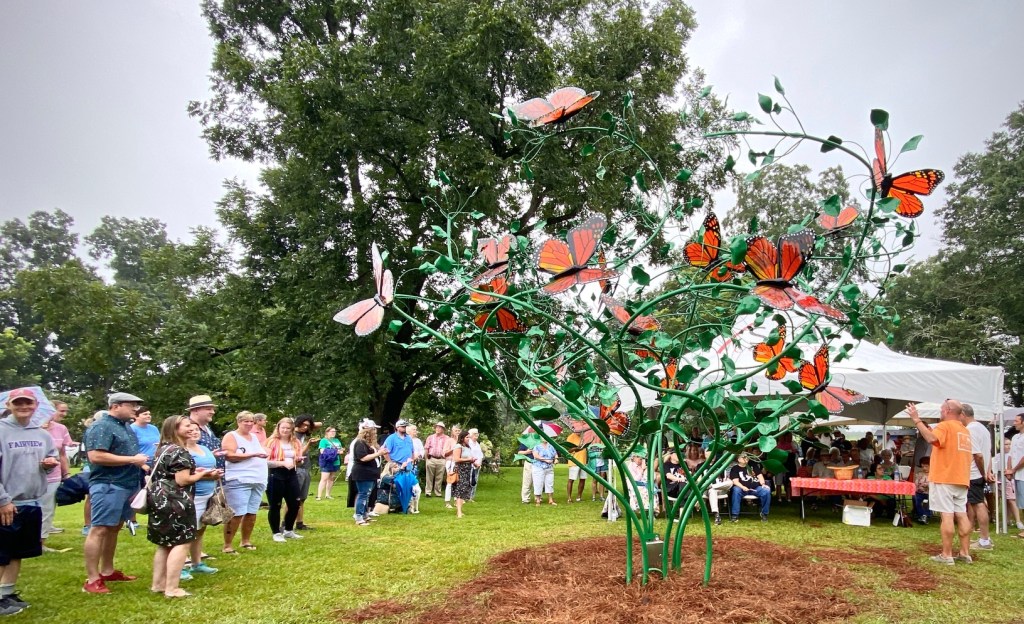 PHOTO BY: Nichole Buchanan: To celebrate Rosalynn Carter’s birthday, Plains held a public dedication of “The Monarch Tree” by renowned artist Peter Hazel. The sculpture is located in the new garden site on Rosalynn Carter Trail. The dedication ended with a butterfly release.

PLAINS — In celebration of her 95th birthday on Thursday, former first lady Rosalynn Carter, alongside her sister Allethea Wall, flipped a switch in Plains on Saturday night that is expected to shine a light on tourism in Georgia’s most famous small town for years to come.

Mrs. Carter and Mrs. Wall were present for the “Lighting of the Sculpture” at the Rosalynn Smith Carter Childhood Garden. Also in attendance was former President Jimmy Carter, as well as other family members and hundreds of guests. The event culminated a weekend of events called Butterfly Daze that drew noted sculptor Peter Hazel of Reno, Nev.

Hazel’s Monarch Butterfly sculpture is the focal point of Mrs. Carter’s Childhood Garden, which sits on land beside her childhood home on Rosalynn Carter Trail.

The 16-foot-tall-by-14-foot-wide sculpture is the renowned artist’s first work in Georgia. It is called the “Monarch Tree.”

The 3,000-pound sculpture, made of metal, includes 18 butterflies and eight stems, symbolizing Mrs. Carter’s birth date on the 18th day of the eighth month of 1927. When asked if the work is unlike any he’s ever done, Hazel replied, “Absolutely yes. I’m just speechless. It’s an honor to complete a project of this magnitude.” Hazel, who grew up in California south of San Francisco, said the trip to Plains was his first, and he was taken aback by the hospitality.

“I’ve always been attracted to the South. The hospitality is mind-boggling,” Hazel said. He said the opportunity to sculpt the monument is a “dream come true.”

The project began in May and took less than three full months to complete. Hazel said the tree is powder coated. According to Hazel, the butterfly wings took the longest to make, as each had to be hand cut, glued and fused. Each of the 18 butterflies is approximately 2 feet by 2 feet, he said.

Hazel personally chose the colors, in reference to the Monarch, for which Mrs. Carter has worked tirelessly to save. “The color is as close as we could make it,” he said. “When you light it up, it’s a heart shape. That was not intentional, but it’s interesting how that turned out.”

The garden is part of the Rosalynn Carter Butterfly Trail, which starts at the Carters’ home in Plains, and has inspired a nationwide effort, especially to save the monarch.

Guest speakers during the Butterly Daze weekend also included Andrew Och, author and C-Span producer for documentaries on all U.S. first ladies; presidential historian Larry Cook; Howie Franklin, who served on Air Force One during the Carter administration and four other presidential administrations; and Plains native and Air Force veteran Jeff Moss. They each gave personnel accounts of serving with and knowing the Carters.

Events on Friday included a Meet and Greet with Hazel at the Plains Community Center courtyard. Though rainfall forced the ceremony inside, a large crowd attended.

Saturday’s daytime events began with a 10 a.m. butterfly release in which 250 butterflies took flight from the Childhood Garden, to the delight of dozens of families. Vendors sold food throughout the day until 5 p.m. Downtown’s Main Street was decorated with butterflies, as well as downtown businesses, including Southwest Trophy & Gifts.

Saturday night’s lighting ran from 8 p.m. to 10 p.m. Heavy hors d’oeuvres and drinks were served and catered by Canterbury Kitchen of Americus. Music was provided by Nashville musician Andrew Greer and friends.

Sponsors and committee members were recognized throughout the weekend. An eight-member committee worked tirelessly on the event, which was spearheaded by Tim Buchanan and LeAnne Smith.

The sculptor Hazel, who is most famous as the “Burning Man” artist, was presented a key to the city by Plains Mayor Boze Godwin. Hazel said he met Buchanan and Smith in May when they had dinner. “We instantly clicked,” he said. Hazel credited Jack Bacon of Reno, Nev., for “making the whole thing happen.”

Bacon, a friend of former President Carter, “came by the shop and he saw a miniature tree. He said, ‘This has to go to the Carters.’ ” Thus began the long road from Reno to Plains, and the association with Buchanan and Smith.

“Tim and LeAnne should get the credit,” said Kim Fuller, executive director of the Friends of Jimmy Carter National Historical Park. “Their love of Plains is evident. This would not have been possible without them.”