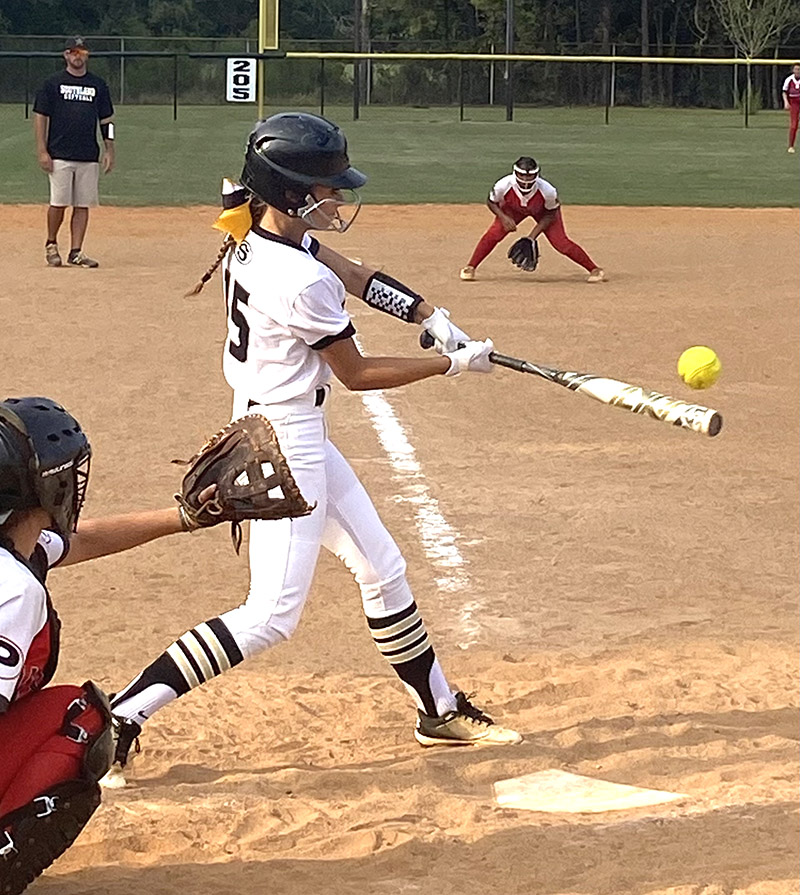 Southland Academy right fielder Gracie Wilson went 2 for 4 at the plate and scored a run in the Lady Raiders’ 5-4 loss to Deerfield-Windsor. ATR Archive

ALBANY – For six and a half innings, the Southland Academy Lady Raiders (SAR) led 3-0 at Deerfield-Windsor until the Lady Knights scored three runs in the bottom of the seventh to tie the game at 3-3 and send it into extra innings. SAR responded in the top of the ninth with a run on a sacrifice fly by Alyssa Godwin to take a 4-3 lead, but in the bottom of the ninth, with both the tying and winning runs on base, DWS third baseman Tamiyah Brown drove in two runs on a walk-off double to give the Lady Knights a 5-4 victory over SAR on Tuesday, August 23 at the Deerfield-Windsor Softball Complex.

With the loss, the Lady Raiders fall to 1-3 on the season and 1-1 in GIAA Region 3AAA play.

This was an unfortunate result for SAR pitcher Ila Johnson, who pitched six scoreless innings before DWS scored three runs in the bottom of the seventh to tie the game. Johnson went the whole way in the circle for SAR, giving up four runs on nine hits while walking two and striking out one.

The Lady Raiders scored two runs in the top of the first inning. With one out, Avery Ledger singled and Landry Hart doubled to put runners on second and third. After Maddie Godwin lined out to second base, Ila Johnson drove in two runs on an RBI single to center field.

The Lady Raiders went scoreless for the next five innings, but added a run in the top of the seventh on an RBI single from Morgan Weaver. However, the Lady Knights responded with three runs in the bottom of the seventh to tie the game at 3-3.

Alyssa Godwin gave the Lady Raiders the lead again on a sacrifice fly in the top of the ninth.

Unfortunately for the Lady Raiders, they weren’t able to hold the lead in the bottom of the ninth. In extra innings, the batting team automatically gets a runner at second base to speed up the game. With one out and a runner on second, DWS shortstop Joi Hubbard reached on an error that allowed Anna Morey to advance from second to third. Then Tamiyah Brown drilled a two-run double into center field to win the game for the Lady Knights.

Both Johnson and Gracie Wilson led the Lady Raiders’ offense by going 2 for 4 at the plate. Johnson drove in two RBIs and Wilson scored a run.

SAR will try to bounce back from this setback when they travel down to Thomasville, GA on Thursday, August 25 to take on Brookwood in another region game. First pitch is scheduled for 4:30 p.m.