In spite of losing a doubleheader to Worth County, Lady Panthers show improvement 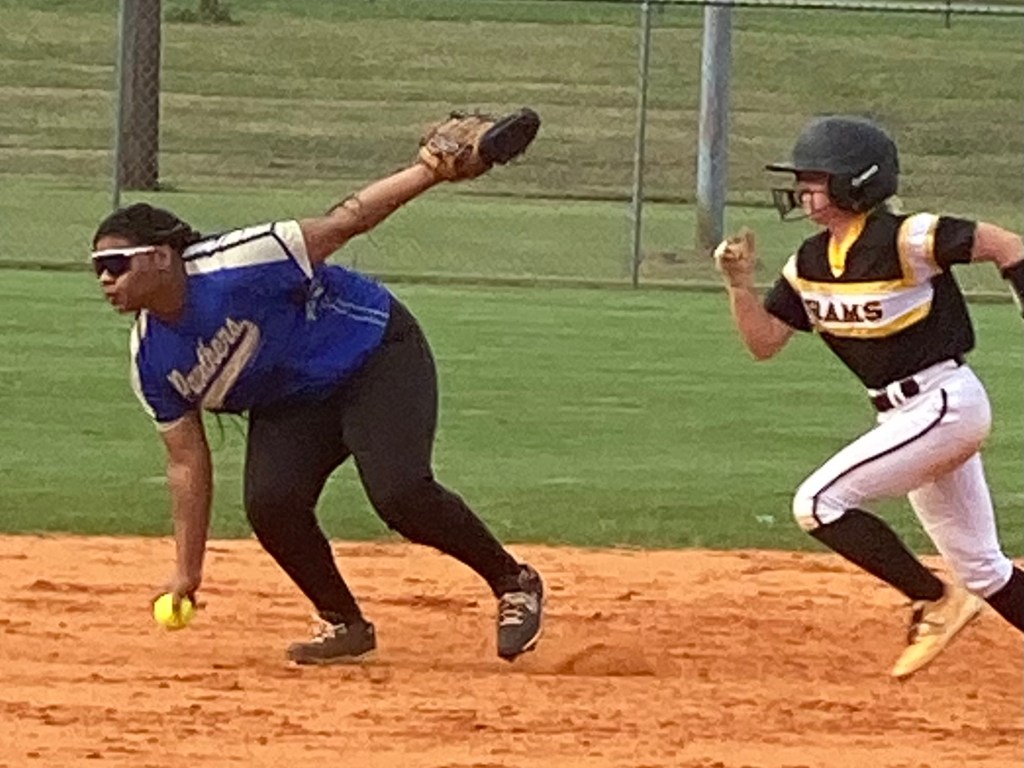 Sumter County shortstop Eriel Aldridge makes a great play to throw out a runner at third base. Photo by Ken Gustafson

AMERICUS – The Sumter County Lady Panthers Softball Team (SCHS) is still in search of its first win of the season. They fell to Worth County in a doubleheader on Thursday by scores of 16-1 and 17-1. However, SCHS Head Coach Coleman Price is seeing steady improvement in his team compared to past seasons.

“We saw our pitching of the ball to be a lot better than we have in the past,” Price said. “We let Worth County hit the ball and put it in play. They’re a good hitting team. They hit the ball really well. They hit it to places that we weren’t, but they hit it to where we couldn’t make plays. We just didn’t make the plays like we needed to. There are some things we’ve got to work on and get better at. As we do that, we’ll be fine.”

Back on Tuesday, August 23, the two teams squared off down in Sylvester and the Lady Rams defeated SCHS 11-3. However, the Lady Panthers trailed 6-3 until the bottom of the fifth inning, when WCHS exploded for five runs.

In Game 1 of the doubleheader, the Lady Panthers took a 1-0 lead in the bottom of the first when Eriel Aldridge hit a fly ball and reached on an error by the WCHS right fielder. Aldridge was thrown out at second on the play, but Haley Moore, who had already reached first base by drawing a walk, scored to give SCHS the early 1-0 lead.

However, that score line didn’t last long, as the Lady Rams erupted for 14 runs on seven hits in the top of the second inning and took advantage of four errors and four walks committed by the Lady Panthers. WCHS would later add two more runs in the top of the third inning to secure the 16-1 victory. 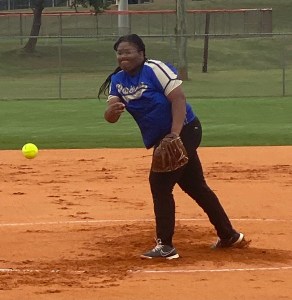 Sumter County starting pitcher Madison Shelton struck out three Worth County hitters in Game 1 of a doubleheader against the Lady Rams.
Photo by Ken Gustafson

SCHS starting pitcher Madison Shelton gave up 16 runs on 10 hits and struggled with seven walks, but was able to strike out three WCHS batters.

However, defensive miscues were a problem for the Lady Panthers, as they committed six errors in the contest.

Lakyn Cooper, Shay Coria Andrews and Abby Perrin each had two hits for the Lady Rams in Game 1 and Perrin drove in three RBIs. WCHS starting pitcher Ahmani Green posted a no hitter in the contest and struck out six SCHS batters while walking one.

Both Shelton and Tamia Aldridge got the only hits of the game for the Lady Panthers, with Shelton driving in a run on an RBI single in the bottom of the first inning.

Shelton struggled in the circle in Game 2. She gave up 17 runs on seven hits, but only five of those runs were earned, as SCHS committed nine errors. However, she struggled to find the strike zone, walking seven batters.

The Lady Panthers (0-6) will host Dodge County (DC) on Tuesday, August 30 at 5:30 p.m. and will then turn around and head over to Eastman for a double header against DC on Wednesday, August 31. The first pitch of Game 1 is scheduled for 4 p.m.