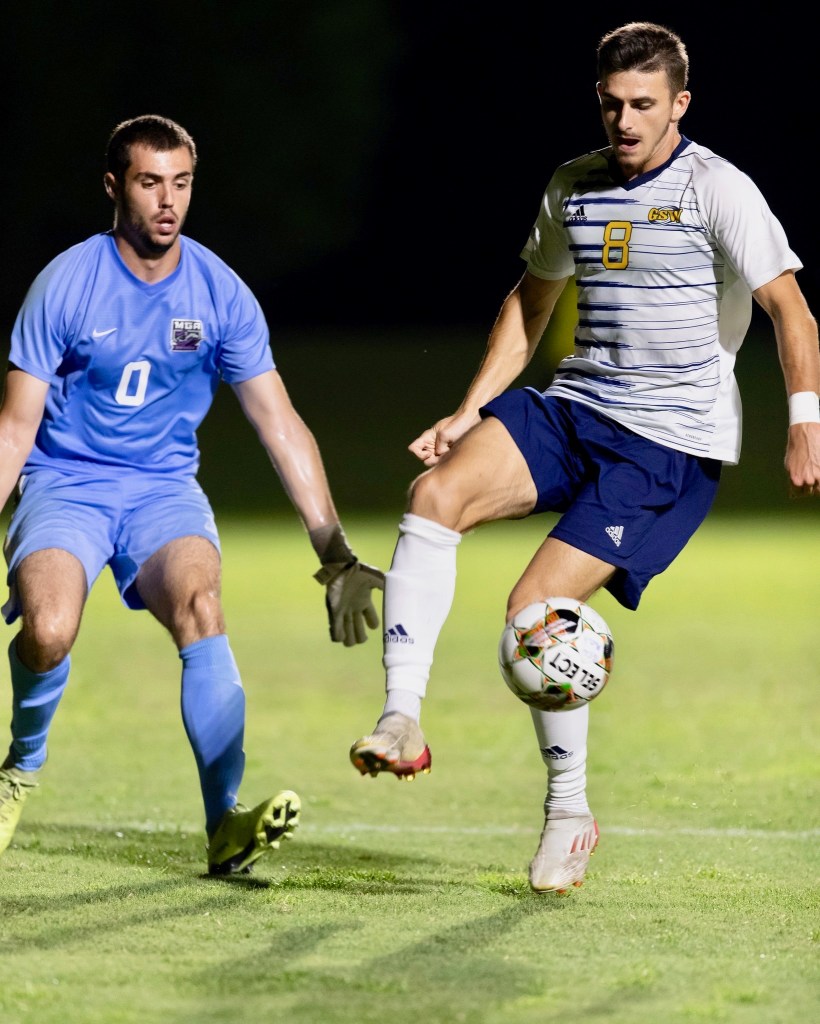 GSW junior midfielder Matteo Landais was one of several Hurricanes that took a shot on goal against Flagler in GSW’s 3-0 loss to the Saints. Photo by GSW Athletics

ST. AUGUSTINE, FL – Having suffered their first loss of the season in a 1-0 defeat at Embry-Riddle University, the Georgia Southwestern Men’s Soccer Team traveled up the road to St. Augustine, FL on Wednesday, September 7 with hopes of scoring their first Peach Belt Conference victory against the Saints of Flagler College. However, despite eight shots on goal, the Hurricanes could not put the ball in the back in the net and gave up three goals en route to a 3-0 loss to the Saints at FC soccer complex.

The match began at 7 p.m., but in the middle of the second half at approximately 8:30 p.m., the match was halted due to lightning and bad weather in the area and did not resume until midnight.

Then in the 14th minute, the Hurricanes created another chance to score when Lucas Bedleg took a shot on goal, but Trueba was able to once again deny GSW with another save.

In the 19th minute of the match, the Saints got on the board when Paul Hansen scored his first goal of the season off an assist from Marc Birkelund. For the remainder of the first half, neither team added another goal and the score remained 1-0 in favor of FC at halftime.

About 15 minutes into the second half, lightning was spotted in the area and the match was stopped at approximately 8:30 p.m. Due to the bad weather, the match did not resume until midnight. Up until the stoppage of play, the Hurricanes had a 10-6 advantage in overall shots and a 6-1 advantage in shots on goal.

However, once play resumed, in the 62nd minute, FC’s Liam Fisch took a shot on goal that was blocked by GSW Goalkeeper Mauricio Uribe, but as Uribe scrambled to smother the ball, he accidentally knocked the ball into his own net, giving the Saints a 2-0 lead.

Then in the 75th minute, FC put the finishing touches on their victory when Dan McGuire scored off an assist from Hansen. GSW tried to get on the board by getting off more shots, but were not able to score. As a result, the Saints went on to defeat the Hurricanes 3-0.

GSW (3-2, 0-1 PBC) will try to rebound from this setback when they host the Pacers of the University of South Carolina-Aiken on Saturday, September 10 at 7 p.m.