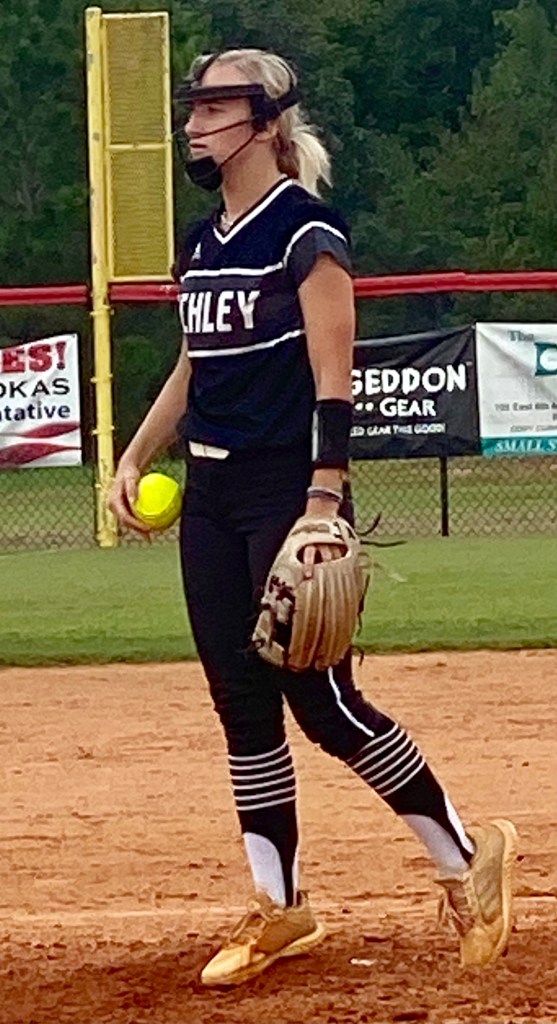 Schley County pitcher Makena Wurtz gave up four runs on six hits in the bottom of the seventh inning against Marion County, including two home runs, but was able to put a stop to the Lady Eagles’ rally by recording the final out and preserving a 9-6 victory for the Lady Wildcats. Photo by Ken Gustafson

BUENA VISTA, GA – Going into the bottom of the seventh inning, the Schley County Lady Wildcats Softball Team (SCHS) seemed to have their region game against the Lady Eagles of Marion County under control. They had just scored three runs on three hits in the top of the seventh to take a 9-2 lead. However, the Lady Eagles made the outcome anything but sure in their half of the seventh. With runners at first and third and one out, J.K. Shivers sent a pitch from SCHS pitcher Makena Wurtz over the center field wall for a three run home run. Shortly thereafter, Savannah Taylor followed that up with a solo home run and the Lady Eagles were just three runs down, trailing 9-6. MC continued to mount its comeback bid as Jaylyn Keyt doubled to left field and A. Dunn singled to put runners at first and second with two outs and the tying run at the plate in the form of Maddie Taylor. Fortunately for the Lady Wildcats, Taylor popped out to SCHS third baseman Lily Walker to end the threat and the Lady Wildcats escaped Buena Vista with a 9-6 victory.

“Fortunately, we did enough throughout the game offensively to whether the storm down the stretch,” SCHS Head Coach Jody Sellars said. “I just told the girls that that was the best job I’ve seen us getting runners on, getting them over and getting them in, coming through with some timely hits. Late in the game, we had less than two outs with runners on third and got ground balls through the right side and got two insurance runs. We didn’t know how big those were going to be, but if you don’t get those, it’s 7-6 right there late. That’s a whole lot tighter. Who knows? But hats off to my girls. Like I said, they made it happen. They got girls on, got them over and got them in with some big timely hits and played pretty clean defense for the most part.” 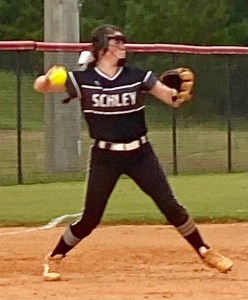 Schley County third baseman Lily Walker went 3 for 4 at the plate with three RBIs and scored a run to help lead the Lady Wildcats to a 9-6 victory over Marion County.
Photo by Ken Gustafson

In the top of the seventh, the Lady Wildcats led 6-2 before Makena Wurtz led off the inning with a single and pinch runner Dixie Justice stole second. Justice would later advance to third base on an error and Emma Walker drove her in on an RBI single.

Reece Bell then doubled to left field and Lily Walker drove in a run on a fielder’s choice. Lizzie Barineau then drove in the Lady Wildcats’ ninth run of the game on another fielder’s choice. It turned out that those last two runs scored by SCHs were crucial to the victory.

MC got to within three at 5-2 in the bottom of the fourth on an RBI double from Haleigh Frazier, but the Lady Wildcats responded in the top of the fifth when Lily Walker drove in the sixth SCHS run of the game on an RBI single to left field.

Lily Walker spearheaded the Lady Wildcats’ offense by going 3 for 4 at the plate with three RBIs and a run scored. Emma Walker went 2 for 3 with an RBI and scored three runs and Zoe Molina went 2 for 4 with three RBIs.

Makena Wurtz started in the circle for SCHS and went the whole way. She gave up six runs on 12 hits and posted one strikeout.

With the win, the Lady Wildcats improve to 9-4 on the season, while the Lady Eagles fall to 10-4.

The Lady Wildcats have now won five straight games and will go for their sixth when they travel over to Hawkinsville to take on the Lady Red Devils of Hawkinsville High School on Monday, September 12. First pitch is scheduled for 5:30 p.m.