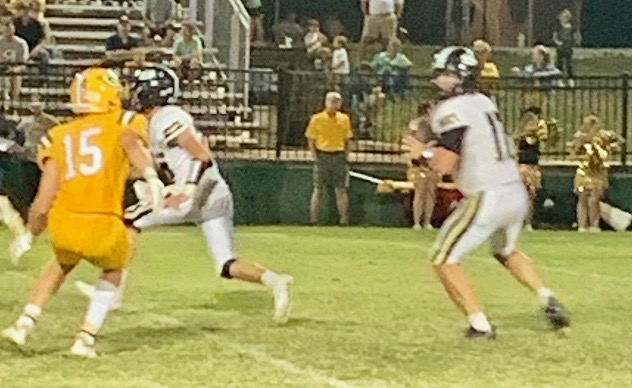 Southland Academy quarterback Chase Ledger completed 5 of 8 passes for 112 yards and rushed for one touchdown in the Raiders’ 35-33 victory over Gatewood. Photo by Jollie Ledger

EATONTON, GA – The Southland Academy Football Team (SAR) jumped out to a 35-13 lead on the Gatewood Gators (GS), but had to withstand a 20-point rally from GS and held on to a 35-33 victory on Friday, September 9 at the Gatewood School In Eatonton, GA.

With the win, the Raiders are now 3-1 on the season, while the Gators dropped to 2-1.

The Raiders opened their scoring by marching 73 yards on 14 plays for a one-yard rushing touchdown by quarterback Chase Ledger. Instead of kicking the extra point, the Raiders decided to go for two and succeeded, taking an 8-0 lead with 3:51 to go in the first quarter.

SAR added to its lead in the second quarter when Ledger orchestrated an 11-play, 45-yard drive that was capped off by a six-yard rushing touchdown by running back Trey Sellars. Once again, the Raiders tried to go for two, but it failed this time and SAR led 14-0 with 7:26 to go before halftime.

The Gators responded with a touchdown of their own with 7:03 to go in the second quarter when running back Ames Johnson broke free and scampered 60 yards to pay dirt. The extra point try was good and the Raiders’ lead was cut to 14-7.

However, SAR countered with a five-play, 71-yard drive that resulted in an 11-yard rushing touchdown by Cedric Smith. The extra point by Henry Johnson was good and the Raiders led 21-7 with 4:11 to play left in the first half.

On the Raiders’ last possession before halftime with 40 seconds left, they were able to add to their lead when Smith capped off a two-play, 75-yard drive with his second rushing touchdown of the night from 10 yards out. Johnson’s extra point was good and SAR led 28-7.

With 17 seconds left, the Gators scored their second touchdown of the game. The extra point was blocked and the Raiders went into the locker room at halftime with a 28-13 lead.

However, there was still one half of football to be played and the Gators were not quitting. They had already pulled off one come-from-behind victory this season, a 33-26 victory over Augusta Prep, and they were poised to do it again.

With 10 minutes to go in the third quarter, the Raiders extended their lead on a six-yard touchdown pass from Ledger to Perry Usher. Johnson’s extra point was good and SAR had a 35-13 lead.

However, the Gators stormed their way back over the remaining minutes of the game. With five minutes remaining in the third quarter, running back Justin Jameson capped off a five-play, 67-yard drive with a 46-yard rushing touchdown. The extra point was good and the Raiders’ lead was trimmed to 35-20.

Then with 11:53 to go in the fourth quarter, Jameson scored his second rushing touchdown of the night from nine yards out. The extra point was good and the Gators were within eight points at 35-27.

Then with 4:09 to go in the game, GS struck again with another touchdown, but the two-point conversion attempt failed and the Raiders escaped Eatonton with a 35-33 victory.

Ledger completed five of eight passes for 112 yards and scored a rushing touchdown to lead the Raiders’ attack. He also got help from the SAR ground game, as Trey Sellars rushed for 208 yards on 27 carries.

The Raiders will now focus their attention on another road trip down to Damascus, GA, where they will take on the Warriors of Southwest Georgia Academy on Friday, September 16 at 7:30 p.m.