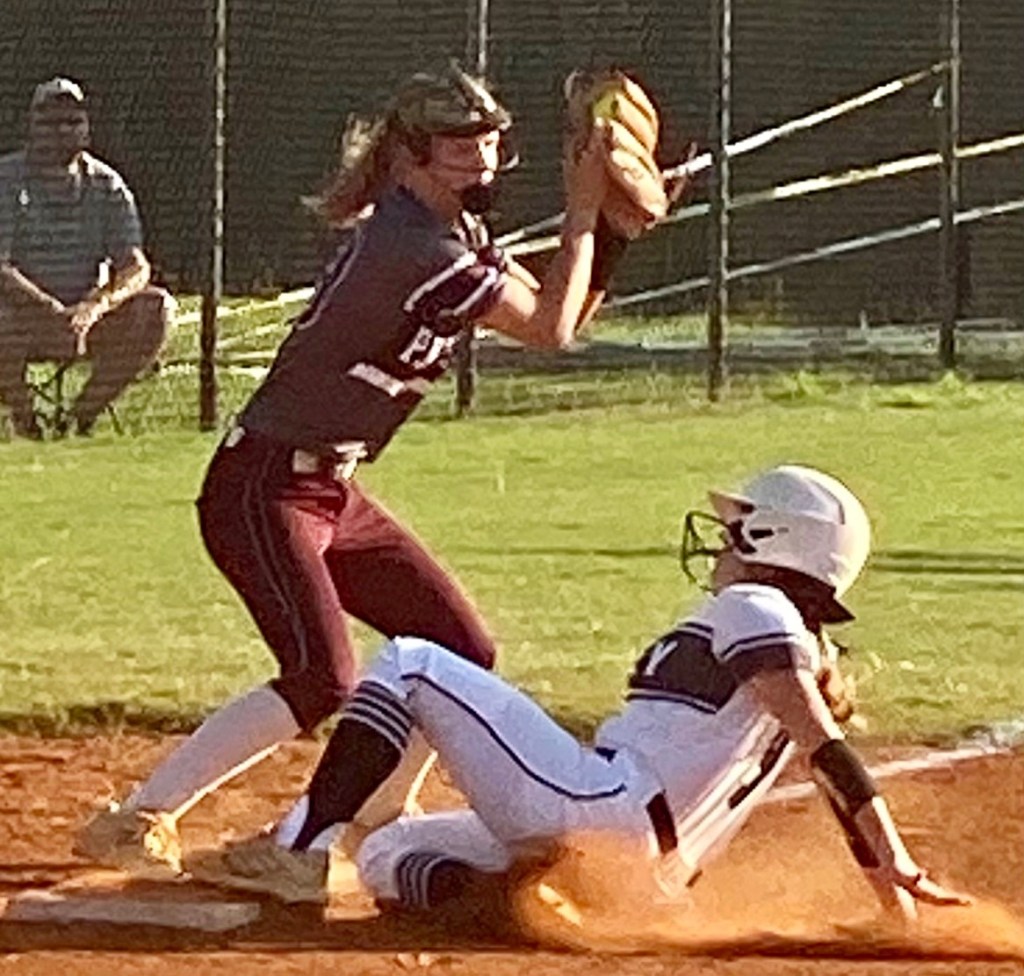 Schley County shortstop Destiny LeCroy is seen here sliding safely into third base against Perry. LeCroy went 2 for 5 at the plate with two RBIs and scored two runs in the loss to the Lady Panthers. Photo by Ken Gustafson

ELLAVILLE – In the bottom of the sixth inning of Schley County’s rematch against Perry (PHS), the Lady Wildcats (SCHS) trailed 6-2 before scoring four runs on five hits to tie the game and gave themselves a chance to win the game in walk off fashion in the bottom of the seventh. However, the Lady Panthers (9-6) held SCHS in the seventh and scored four runs on three hits in the top of the eighth. The big hit in the frame came off the bat of Trinity Odom, who belted a three-run home run over the left field wall. The Lady Wildcats (10-6) scored a run in the bottom of the eighth on an RBI single from Kalli Bishop, but could not make the come-from-behind surge and lost to PHS 10-7 on Wednesday, September 13 at Wildcat Park.

With the win, the Lady Panthers tie this year’s two-game home-and-home series at 1-1. In the previous meeting between these two teams on Wednesday, August 10, the Lady Wildcats defeated PHS 12-4 at Perry High School.

“I’m proud of my girls’ effort. We didn’t roll over,” SCHS Head Coach Jody Sellars said. “I always preach that. I’m proud that we showed fight. We could have laid down two different times and we didn’t. We fought back so I’m proud of my girls’ effort there. Perry is a good, scrappy team. They put the ball in play. We didn’t get a couple of calls in the strike zone. We had to throw it across the plate and they hit the ball and we didn’t make the plays that we needed to. That’s what I told the girls. We had a tight strike zone, but at the end of the day, we had a couple of plays that if we make here and there throughout the game, we probably win it in seven. It’s 7-3 or 7-4 if we play better defense. We’ve got to clean that up. I told my girls that pitching and defense has always got to be there. It’s got to be a given every game. Offense kind of comes and goes, but I’m still proud of my girls’ effort. We will continue to work and get better.” 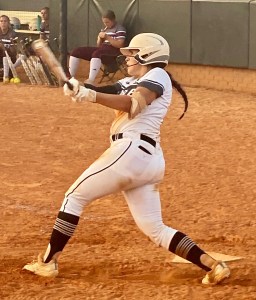 Schley County catcher Zoe Molina went 3 for 5 at the plate with a double and an RBI in the Lady Wildcats’ loss to Perry.
Photo by Ken Gustafson

While PHS struggled in the field with five errors, the Lady Wildcats also had their struggles defensively. They committed three errors on the day and that played a role in their loss to the Lady Panthers.

While the SCHS defense had its struggles, the offense did not. The Lady Wildcats scored seven runs on 10 hits. SCHS catcher Zoe Molina led the SCHS offense by going 3 for 5 at the plate with a double and an RBI. Both right fielder Kalli Bishop and third baseman Lilly Walker each went 2 for 3 at the plate with an RBI and a run scored and shortstop Destiny LeCroy went 2 for 5 with two RBIs and two runs scored. 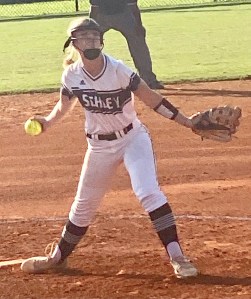 Schley County pitcher Lizzie Barineau is in action against Perry. Barineau gave up nine runs on 11 hits, walked one and struck out four in the loss to Perry.
Photo by Ken Gustafson

Lizzie Barineau started in the circle for the Lady Wildcats. In a little over seven innings of work, she gave up nine runs on 11 hits, walked one batter and struck out four. Makena Wurtz came on in relief of Barineau in the top of the eighth and gave up a run on one hit.

The Lady Panthers took a 1-0 lead in the top of the second inning. With runners at first and third and nobody out, Brooke Ball grounded into a fielder’s choice that allowed Cason Gentry to score. 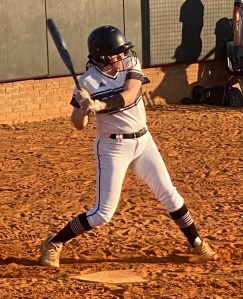 Schley County third baseman Lily Walker went 2 for 3 at the plate with an RBI and a run scored in the Lady Wildcats’ 10-7 loss to Perry.
Photo by Ken Gustafson

However, the Lady Wildcats responded in the bottom of the fourth by scoring two runs on two hits and taking advantage of two errors committed by the Lady Panthers. With one out, Kalli Bishop singled and Emma Walker reached on an error. Makena Wurtz then reached on an error that allowed Bishop to score. Lily Walker then drove in the second SCHS run of the game on an RBI single to center field and the Lady Wildcats had a 2-1 lead.

Both teams were held scoreless in the fifth inning, but the Lady Panthers exploded for five runs in the top of the sixth on four hits and took advantage of two SCHS errors. Both Riley Jones and Brooke Ball drove in runs on RBI singles and Chloe Davey reached on an error that brought home two more runs for PHS. Then with two outs, Trinity Odom drove in two more runs on an RBI double to left field. At this point, the Lady Wildcats found themselves trailing PHS 6-2. 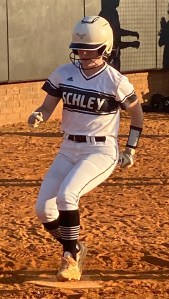 However, once again, SCHS fought back. With one out, Lily Walker drew a walk and Reece Bell singled to put runners on first and second. Lizzie Barineau flew out to right field for the second out, but Brenna Jacobs drove in two runs when she hit a ball back up the middle for an RBI single, making the score 6-3 in favor of PHS.

Destiny LeCroy then drove in two more runs on a single to right field and Zoe Molina drove in LeCroy to tie the game on an RBI single to center field. 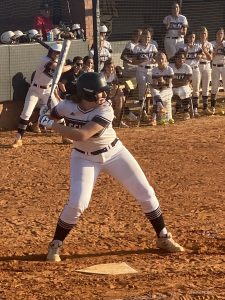 Schley County’s Reece Bell went 1 for 2 at the plate with a walk in the Lady Wildcats’ 10-7 loss to Perry.
Photo by Ken Gustafson

Neither team was able to score in the seventh inning and the game would have to be decided in extra innings. However, Trinity Odom’s three-run homer in the top of the eighth was part of a four-run explosion by PHS that the Lady Wildcats could not overcome.

In the bottom of the eighth, Bishop drove in LeCroy on a two-out RBI single, but Emma Walker flew out to left field to end the game.

The Lady Wildcats have won six out of their last eight games and will try to make it seven of nine when they host Crawford County in a rematch on Thursday, September 15 at 5:30 p.m. In the first meeting between the two teams on Thursday, August 18, SCHS won 9-1.