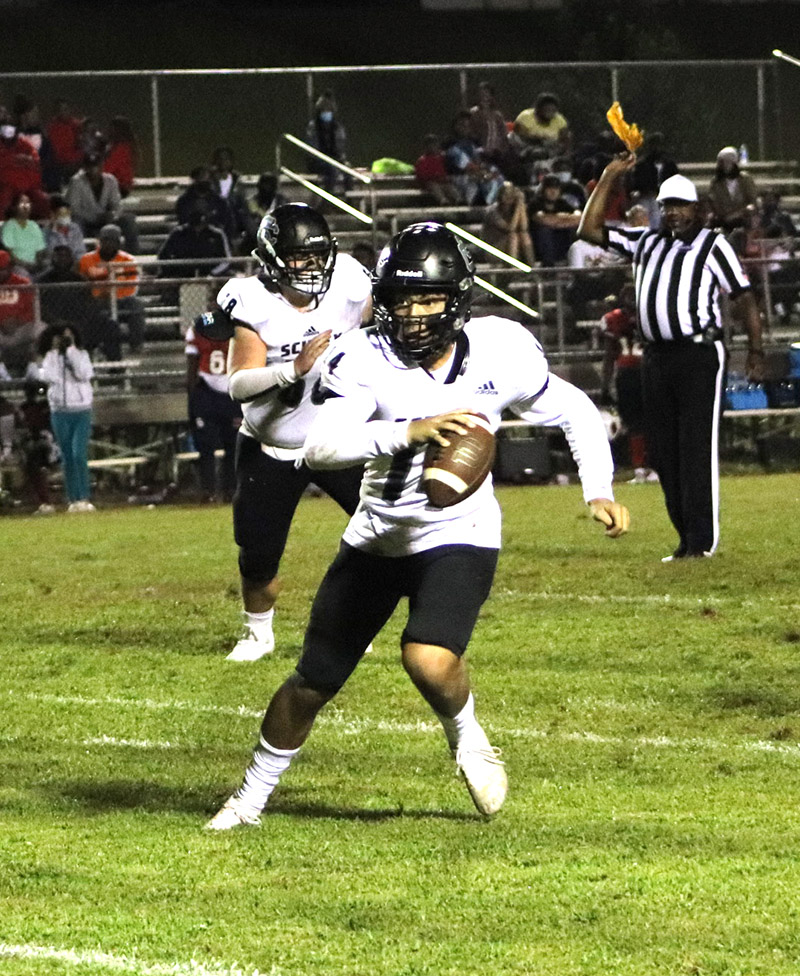 ELLAVILLE – It did not take long for the Schley County High School Football Team (SCHS) to establish itself and to show in decisive fashion who the victor would be between the Wildcats and the undermanned and overmatched Hawks of Central Talbotton (CT). From start to finish, SCHS dominated the contest all the way to a 63-0 drubbing of the winless Hawks in front of a large crowd of fans, students and alumni gathered at Wildcat Stadium on Homecoming Night in Ellaville.

This was a game in which everybody on the roster got a chance to get some valuable playing experience and SCHS Head Coach Darren Alford was pleased with the effort and execution from everyone on the team.

“We came out and played the varsity for three series and then we started to get our second teamers in. We got those guys in and they played well. Then we got to go with our JV guys and we got everybody in. Everybody played well tonight. I felt good about it,” Alford said. “We will go back and look at film and make sure everything was right, but I’m excited about the amount of kids we got to play tonight and everybody played good, I thought.”

The Wildcats wasted no time in taking control of the game early. On their first possession, Kanazawa threw a 49-yard touchdown pass to Sam Forehand. The extra point by Miguel Yanez-Rueda was good and SCHS led 7-0 with 11:16 to go in the game.

After the Wildcat defense neutralized the Hawks’ offense on their first possession, the Wildcats got the ball at the CT 36. Malachi Banks then ran the ball down to the Hawks’ 23 before Kanazawa found Clinton Jackson in the corner of the end zone for a 23-yard touchdown pass. The extra point by Yanez-Rueda was good and the Wildcats led 14-0.

On the Hawks’ next possession, the SCHS defense, as it did all night, shut down the CT offense. Trenton Stubbs came up with a sack on second down and the Wildcats would eventually get the ball back on the CT 27 after a very short punt from the Hawks. Banks then ran the ball 26 yards down to the CT one-yard line and scored on the next play. Yanez-Rueda’s extra point was good and SCHS led 21-0 with 5:30 to play in the first quarter.

On the Hawks’ next possession, SCHS defensive back Carson Westbrook recorded an interception and the Wildcats cashed in once again when Kanazawa found Luke Forehand for a short touchdown reception. Yanez-Rueda’s extra point was good and SCHS led 28-0 with 3:10 left in the first quarter.

Just before the first quarter ended, the Wildcat defense came up with another turnover by forcing and recovering a fumble at the CT 39-yard line.

SCHS once again took advantage of the turnover and moved the ball down close to the CT 15. However, two false start penalties pushed the Wildcats back to the CT 35.

SCHS tried to go for it on fourth down, but failed to convert and the ball went over to the Hawks.

However, CT turned it right back over to the Wildcats when Jordan Hudson intercepted a pass and SCHS was back in business near the Hawks’ 35. On the first play from scrimmage, Kabreon Aldridge broke through the CT defense and scampered 34 yards for another Wildcats touchdown. Yanez-Rueda’s extra point was good and SCHS led 35-0 with 9:10 to go before halftime.

At this point, Alford was able to play his backups and quarterback Blake Weldon threw a short pass to Demarkis Clark, who ran the ball down the sidelines for another SCHS touchdown. The extra point by Yanez-Rueda was good and the Wildcats led 42-0 with 4:11 left before halftime.

However, even with less than a minute left before the half, the Wildcats were still not done as Weldon threw a 31-yard touchdown pass to Conner Rhyne. Yanez-Rueda’s extra point was good and SCHS went into halftime with a 49-0 lead.

In the third quarter, the Wildcats picked up right where they left off. The SCHS offense moved the ball down to the CT 10-yardline, but holding was called against the Wildcats. Nevertheless, they overcame that penalty and put more points on the scoreboard when Weldon threw a touchdown pass to Tyrese Cook. Yanez-Rueda’s extra point was good and the Wildcats led 56-0 with 3:57 left in the third quarter.

The Wildcats were able to get the ball back on another fumble recovery shortly thereafter and capitalized on the turnover when Weldon threw a short pass to the right to Rhyne, who ran down the sidelines for another SCHS touchdown. Yanez-Rueda’s extra point was good and the Wildcats would go on to win 63-0.

SCHS is now 2-2 overall and 1-0 in region play. They will make the short trip to Montezuma to take on Macon County on Friday, September 23 at 7:30 p.m.