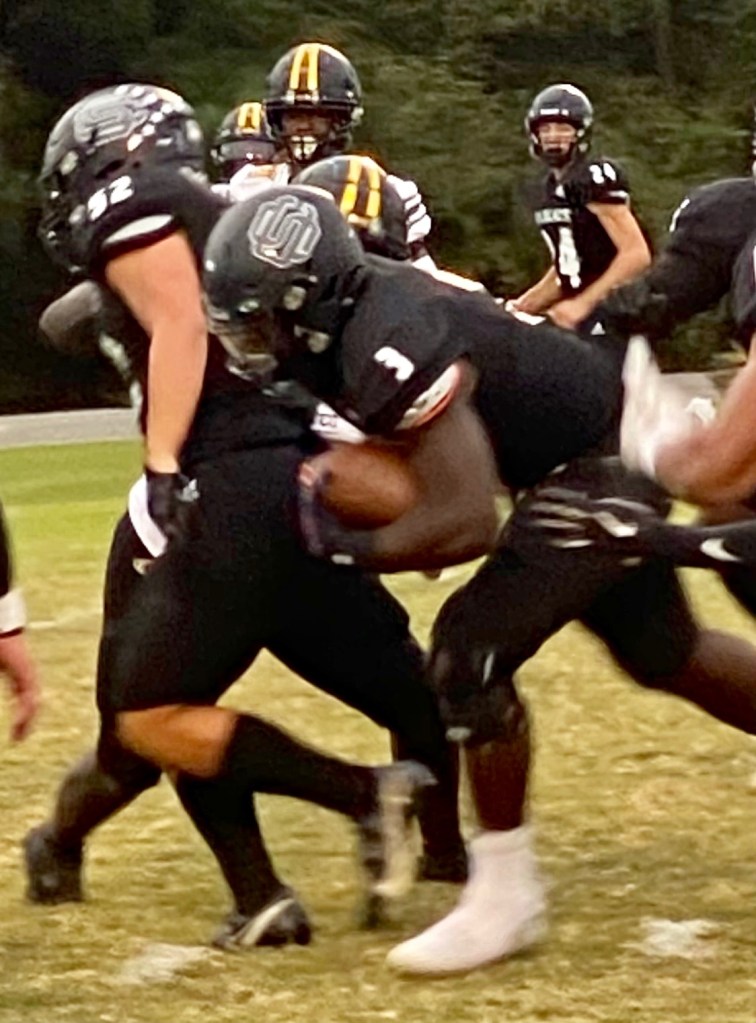 Schley County sophomore running back Zayden Walker scored a rushing touchdown on offense and came up with a pick six on defense in the Wildcats’ 29-6 victory over Chattahoochee County. Photo by Ken Gustafson

ELLAVILLE – The high school football game between the Schley County Wildcats (SCHS) and the Chattahoochee County Panthers (CHATTCO) was moved from Friday to Thursday due to weather concerns stemming from Hurricane Ian, but it didn’t affect the Wildcats in the least. SCHS sophomore running back Zayden Walker scored a rushing touchdown on offense and came up with a pick six on defense to help lead the Wildcats to a 29-6 region victory over the Panthers.

With the win, SCHS improves to 4-2 overall and appears to be on a collision course with Manchester for the GHSA A D2 Region 6 Championship. The Wildcats are undefeated in region play at 3-0 and so are the Blue Devils (3-0). They defeated Macon County 53-0 on Thursday.

“I thought our kids played really hard. I really liked the effort that we had. We gave a lot of energy, especially in the first half,” SCHS Head Coach Darren Alford said. “In the second half, we came out tired and lethargic. You know, I challenged them up there to go and score on the very first series and we did that and after that time, we didn’t continue to play the way I wanted to, but I feel really good about the overall effort. I feel really good about where we’re at right now. I think we have a good chance to move ahead. We’ve got to play Taylor County and then, we’ll get to see Manchester. Hopefully, we will be undefeated at that time and maybe we can decide some region stuff at that particular time.” 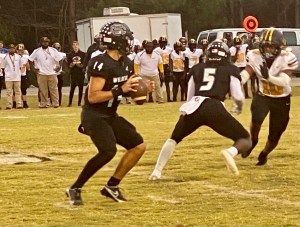 For much of the first quarter, it was a defensive struggle between both teams, but near the end of the quarter, the Wildcats orchestrated a drive into CHATTCO territory. The drive bogged down and SCHS was going to send out Miguel Yanez-Rueda to attempt a short field goal. However, Encroachment was called against the Panthers and it gave the Wildcats a first down at the Panthers’ four-yard line. A couple of plays later, senior running back Malachi Banks scored from one yard out. The extra point by Yanez-Rueda was good and SCHS led 7-0 going into the second quarter. 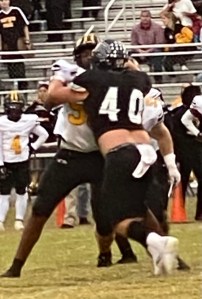 Schley County junior nose guard/defensive tackle Trenton Stubbs tries to shed his blocker and get to the quarterback. Stubbs recovered a fumble for the Wildcats in their win over Chattahoochee County.
Photo by Ken Gustafson

The Wildcats defense continued to limit the Panthers’ offense and it gave SCHS another opportunity to mount another scoring drive, which they did. Thanks to a steady diet of the running game, the Wildcats were able to move the ball all the way down to the CHATTCO one-yard line. SCHS culminated the drive with a one-yard rushing touchdown by Walker. The extra point by Yanez-Rueda was good and SCHS had a 14-0 lead with 10:38 to go before halftime. 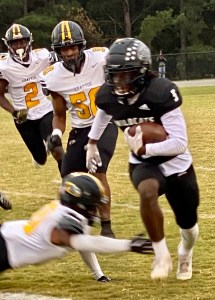 Neither team could change the scoreboard over the final 10 minutes of the first half, but with 30 seconds left, the Panthers had the ball at their own 47-yard line before quarterback Eric Josey through a pass right into the hands of Walker, who ran the ball 60 yards the other way for a pick six. Sam Forehand scored a two-point conversion and the Wildcats went into the locker at halftime with a 22-0 lead.

The Wildcats were not able to mount a scoring drive on their first possession of the second half and were forced to punt. However, they decided to try a fake punt and gave the ball to Kabreon Aldridge, who ran the ball across midfield for first down yardage. Kanazawa would later complete a pass to Carson Westbrook down at the CHATTCO eight-yard line. A couple of plays later, Banks scored his second rushing touchdown of the night from a yard out and Yanez-Rueda kicked the extra point to give the Wildcats a 29-0 lead. 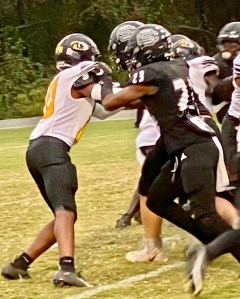 The SCHS defense once again stopped the Panthers on offense as junior nose guard Wyatt Halstead sacked Josey to force fourth down. The Wildcats offense went right to work on their next possession as Kanazawa orchestrated a drive that ended up down at the CHATTCO three-yard line. SCHS was poised to put more points on the board, but CHATTCO outside linebacker Jakeem Harris sacked Kanazawa and forced a fumble at the Panthers’ 15. He then picked up the ball and ran it 85 yards the other way for a touchdown. The two-point conversion attempt failed, but the Panthers were on the board, trailing the Wildcats 29-6.

The Panthers were able to move the ball down to the SCHS 35 on their next possession. Then on fourth down and 13, Josey scrambled and was able to gain first down yardage. However, the SCHS defense forced another fourth down situation for CHATTCO. On fourth and 10 from the Wildcats’ 27, Josey tried to gain the 10 yards on a quarterback keeper, but was tackled by Halstead short of the line to gain. An illegal shift penalty was called against the Panthers and the Wildcats took over on downs. They immediately went to work again on offense, moving the football down near the CHATTCO 25. 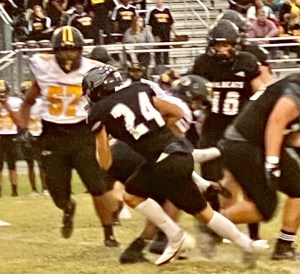 Kanazawa mishandled the snap on the next play, but completed passes to Clinton Jackson and Carson Westbrook to get the Wildcats down to the Panthers’ four-yard line. On fourth and goal from the four, SCHS went for it and failed, but the outcome of the game was already decided at that point as the Wildcats would go on to win by the score of 29-6.

Junior nose guard Wyatt Halstead had two sacks on the night and senior outside linebacker Demarkis Clark had one sack. Junior defensive tackle Trenton Stubbs also recovered a fumble in the game for the Wildcats.

GHSA A D2 Region 6 is divided into two sub regions: Region 6A and Region 6B. Manchester sits a top the Region 6B standings at 3-0 and the Wildcats are in first place in the Region 6A standings at 3-0. If SCHS doesn’t stumble in its game at Taylor County on Friday, October 14, the Wildcats will likely be playing for all the region marbles when they face the Blue Devils at Manchester the following week on October 21. 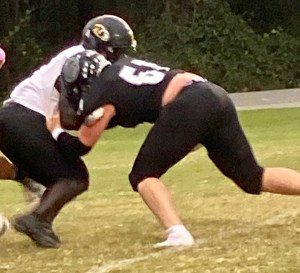 Schley County junior center/nose guard Wyatt Halstead is engaged with a CHATTCO blocker. Halstead had one sack in the game against the Panthers.
Photo by Ken Gustafson

“We can’t take nobody for granted and we’re not going to,” Alford said. “We’re gong to make sure every week that we are going to play hard and try to win that game.” 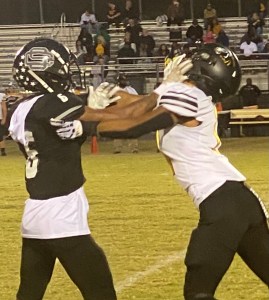 SCHS will have next Friday off, but will travel up U.S. Highway 19 to Butler on Friday, October 14, where they will face the Vikings of Taylor County. Kickoff for that game is scheduled for 7:30 p.m.