Rough night for Raiders at home against Brookwood 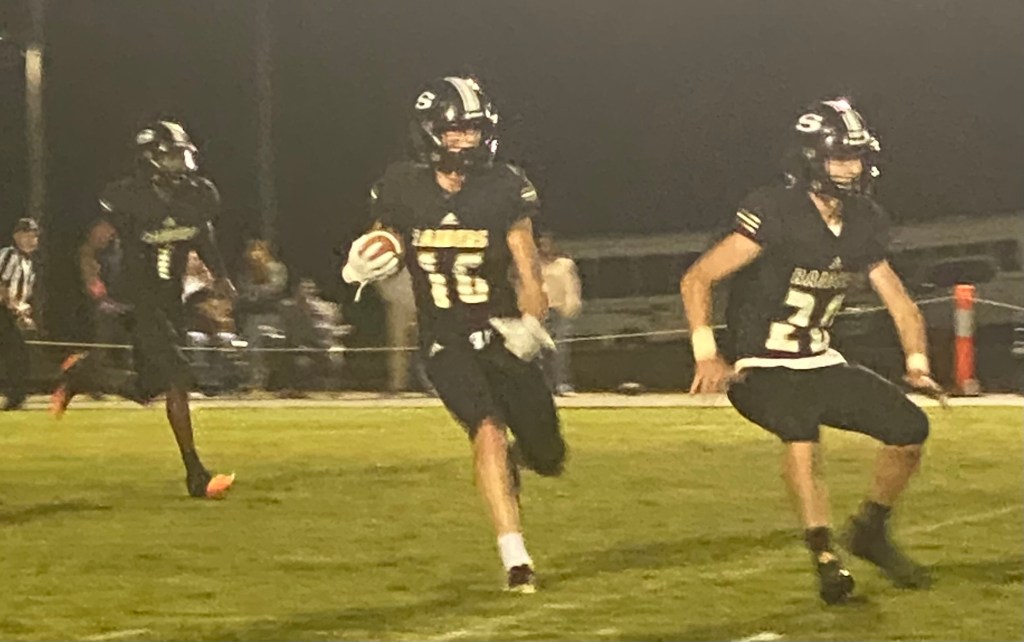 AMERICUS – The Southland Academy Raiders (SAR) came into Friday night’s GIAA Region 3-AAA matchup against Brookwood (BKW) wanting to put an end to their two-game losing streak with a win over the Warriors. However, the Raiders gave up too many big plays on defense throughout the game and it led to a very long night, as the Warriors handed SAR a 57-14 lopsided loss at Harvey Simpson Stadium on Friday night, October 14.

On this night, a reunion also took place, as the Southland Academy Class of 1980 was welcomed back home.
In spite of the drubbing his club took at the hands of BKW, SAR Head Coach Rod Murray was extremely pleased with the effort his players gave throughout the game and with how they competed against a high-quality football team.

“We competed tonight. I mean, our kids played hard. They laid it out against a good football team,” Murray said. “We know they (BKW) have a good football team. We’re injured in a lot of spots and our kids came out here and competed, so we are going to go right back to work. We’re not feeling sorry for ourselves. We’re going to keep working.” 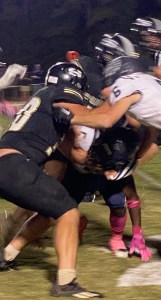 Neither offense could get things going early in the first quarter, as both defenses were playing solid. One of those defensive plays was made by SAR Defensive Back Banks Simmons, who tackled the BKW running back in the backfield to force the Warriors into punting on fourth down.

The Raiders were able to mount a drive that resulted in points later in the quarter. On third and 15 from the SAR 46, Senior Quarterback Chase Ledger completed a pass to Simmons at the BKW 26-yard line. Senior Running Back Cedric Smith then ran the ball down to the BKW 12 and a couple of plays later, Junior Running Back Trey Sellers scored the first of his two touchdowns from seven yards out. The extra point by Senior Henry Johnson was good and the Raiders had a 7-0 lead.

However, it didn’t take long for the Warriors to respond, as Quarterback Rodge Waldrop completed a 55-yard touchdown pass to Destin Moore. The extra point by Oscar Thompson was good and the score was tied at 7-7. 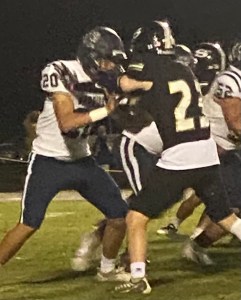 The Warriors would later score on another big play when Waldrop completed a 78-yard touchdown pass to Rex Schofill. However, Thompson’s extra point was blocked by SAR Freshman Cade Futch. In spite of the touchdown, Futch’s block of the extra point gave the Raiders hope as the first half continued with the Warriors leading 13-7.

However, on the ensuing kickoff, BKW executed a successful on-side kick and recovered the ball near midfield. The Warriors were able to take advantage of their success quickly when Waldrop threw a 49-yard touchdown pass to T.J. Thomas. BKW decided to go for two and Waldrop found Tight End Grant Gaston in the end Zone for the successful two-point try, making the score 21-7 in favor of the Warriors.

The Raiders were able to respond on their next possession, however. They mounted a scoring drive that resulted in a four-yard touchdown run by Sellers. The extra point by Johnson was good and the Raiders had cut their deficit to 21-14.

However, the Warriors struck again with another big play against the SAR Defense. Shortly before halftime, Thomas scored his second touchdown of the night on a 72-yard run from scrimmage. Thompson’s extra point was good and BKW led SAR 28-14 at halftime.

Unfortunately for SAR, the Raider Defense continued to struggle against the BKW offense. On their first possession of the second half, the Warriors mounted a drive down to the SAR 15. They then finished off the drive with a touchdown when Waldrop found Grant Gaston for a 15-yard touchdown pass. BKW decided to go for two and Thomas scored the two-point try to give the Warriors a 36-14 lead over the Raiders midway through the third quarter.

Things went from bad to worse for the Raiders on their next offensive possession. On third and seven from the BKW 46, Ledger’s pass was intercepted by Schofill and he took it the distance for a pick six. Thompson’s extra point was good and the Raiders were in a deep hole, trailing 43-14 with 4:32 left in the third quarter.

The Raiders were not able to get anything going on their next possession and the Warriors took advantage, as Waldrop found Moore in the end zone for his second touchdown reception of the night, this one for 46-yards. The extra point by Thompson was good and SAR trailed 50-14 with a little over a minute left in the third quarter.

In the fourth quarter, Banks Simmons was brought in to replace Ledger at quarterback and the Raiders were able to move the ball into BKW territory on their next possession. Ledger was moved to running back and he was able to gain yardage down to the BKW 29. However, the Raiders fumbled the football and it was recovered by the Warriors at their own 33-yard line.

On their ensuing possession, the Warriors quickly moved the ball into SAR territory and put more points on the board when Schofill, who was playing quarterback at the time, scored on a quarterback keeper. The extra point was good and BKW went on to win by the score of 57-14.

Ledger completed six of 12 passes for 87 yards with no touchdowns and threw one interception, which was a pick six. Banks Simmons came off the bench in the fourth quarter for SAR and completed all four of his pass attempts for 14 yards. In total, SAR quarterbacks completed 10 of 16 passes for 101 yards.

The Raiders got all of their points from the ground game, as Trey sellers scored both of SAR’s touchdowns. Sellers rushed for 68 yards on 17 carries with those two touchdowns and Henry Johnson had three catches for 25 yards to lead the Raiders in receiving.

The Raiders will try to bounce back from this setback and will try and put an end to their three-game losing streak when they host Valwood on Homecoming Night on Friday, October 21. Kickoff is scheduled for 7:30 p.m.