Fresh Start and Governor Kemp enjoy an afternoon of conversation 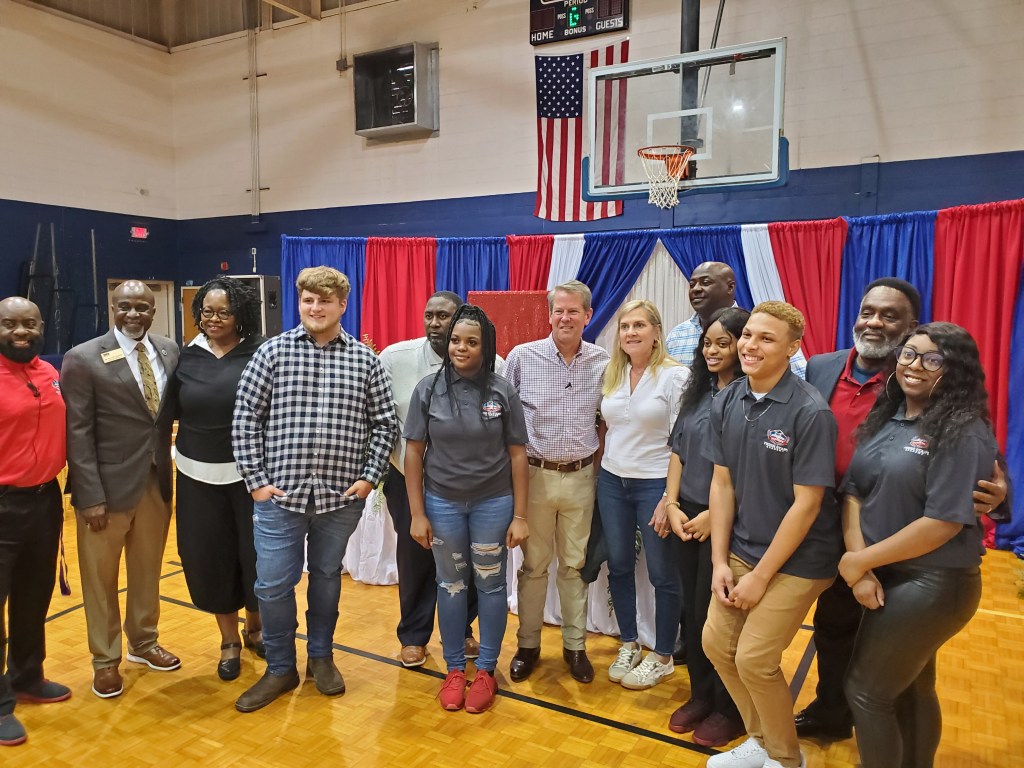 On a beautiful Tuesday afternoon, you could find Sumter County’s future leading a conversation on Georgia’s future. Travis Lockhart, the CEO of Fresh Start Academy, Sumter County Schools’ alternative school, saw an opportunity for his students to become the voice of Sumter County and ask Governor Brian Kemp the questions most pressing on their minds. It is likely these students are not old enough to vote, that in no way means they are not invested in the gubernatorial candidates and the direction our state will take for the next four years. Governor Kemp, along with wife Marty and their daughter, were present to hear the concerns and hopes of these students. The students proved to be good researchers as they identified and presented their concerns to the governor. Governor Kemp was excited to answer them. Topics covered everything from learning loss secondary to COVID-19 to hearing accomplishments of the administration as well as hopes and plans going forward. 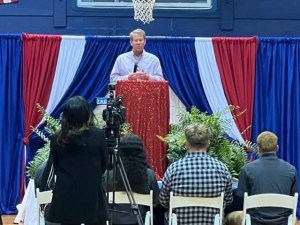 The first question was regarding his duties. Governor Kemp sees the safety of Georgians to be one of his top priorities. Those who serve and protect us include many from Georgia State Patrol to game wardens, to community supervision personnel, those in corrections, school resource officers, and our local public safety professionals. In addition, with COVID-19 surging the safety of our health was of primary but not singular concern. He reminded the students they might have seen the governor’s office in action in our area, as Governor Kemp “called in the national guard” to address needs which were particularly seen in our area. With the guard’s help, our region received attention to impede the spread of the virus. Medical providers and personnel who were following the data, provided services to clean and make nursing homes as safe as possible. In the cases of physical infrastructure needing to be in place, the state helped with makeshift options outside the customary. 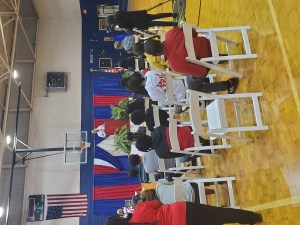 To be expected, the students presented questions on educational issues. Governor Kemp spoke on the state of education and COVID-19’s impact. While he felt it wise to close schools as we became aware of COVID-19, he also felt local school boards should own and practice their authority to speak on behalf of the voters. He reports he received much criticism from both sides of the aisle on this issue and his gubernatorial opposition was critical on his position. However, Kemp reports trusting our local school boards to do what is best for our local students. Independent of local school board decisions on the method of educating the student, he was committed to addressing the learning loss endured with the shift from traditional education to virtual. To address learning loss specifically he has made available grants which are tied to a particular student to meet the need in keeping up with grade expectations. Kemp spoke of his “teacher pipeline legislation” which he campaigned on four years ago. Since Georgia has been under his leadership, teachers have received a $5000 pay raise as he promised in his prior campaign. He has vested his efforts to hear from the educational personnel within each district. He is aware of the shortage of teachers, and he put into place the opportunity for paraprofessionals to sit for teacher certification without paying what has typically cost a teacher $3000 to achieve. He has placed emphasis on both school counselors and school resource officers. As he sees it, for a Georgia student today, “the sky is the limit” and he encourages students to take full advantage of all their offerings to include utilizing college and career academies and technical schools. Having worked in construction he reports on the need for various professionals and spoke of women in particular who are benefiting from technical school training and working jobs which have traditionally been filled by men.

Kemp also addressed school safety. His administration has facilitated ongoing relationships between the Georgia Emergency Management Agency and local school boards. In addition, he has shown support for the school resource officers and given $30,000 to each school for the board of education to spend how they see fit to further secure safety for their students.

Kemp wanted the students to know about the Mental Health Parity Act which addresses mental health needs in a proactive manner. COVID-19 has manifested its damage not only in physical health, but it has also touched everything from business to mental health to education to overall wellbeing. His administration is aware of the systematic impact the pandemic has had on a Georgian and he is making efforts to address the needs of our citizens in various ways. Mental health was of concern prior to COVID-19, it has become more evident with the introduction of COVID-19 to our area.

One Fresh Start student let the governor know he was involved in Georgia’s Foster Care/Adoption system. He wanted to know what is being done to make it easier for these systems to flourish. Governor Kemp responded Georgians value life and as such, his administration took on reforming the foster/adopt systems. Bureaucracy which could slow people from becoming foster parents has been identified and reduced. The costs associated with taking on the mission of becoming a foster/adoptive parent has been minimized as to not impede due to financial concerns. Additionally, “per diem rates” have increased so these families are equipped financially to care for children. 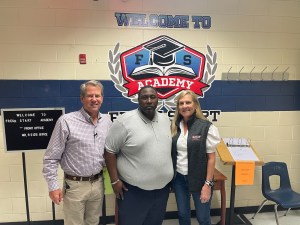 Governor Kemp, Travis Lockhart and Georgia’s First Lady, Marty Kemp, who has taken on demolishing human trafficking as an initiative

Travis Lockhart and his staff are working hard to ensure their students get a robust educational experience. On Tuesday, October 11, 2022, those students could be found having a conversation with our state’s leader on topics which they wanted to know about. These students may not be able to vote in November, but they are learning how to make an educated vote. As is the norm with the Fresh Start student, they proved to be good hosts and each student present was engaged. Serving as moderators for the event were Fresh Start students, Jaida Robinson, Marion Hogan, Thomas Jameson and Arielle Guest. In addition to Governor Kemp, other locally elected professionals were present to include Sumter County Board of Education members, Rick Barnes, Sylvia Roland and Abbis Bivins. Mike Cheokas, Daryl Dowdell and Judge R. Rucker Smith were also on hand for the students to meet and enjoy conversation. It was beautiful Tuesday and the students of First Start took advantage of such a gift.