Panthers fall to Worth County in high-scoring affair 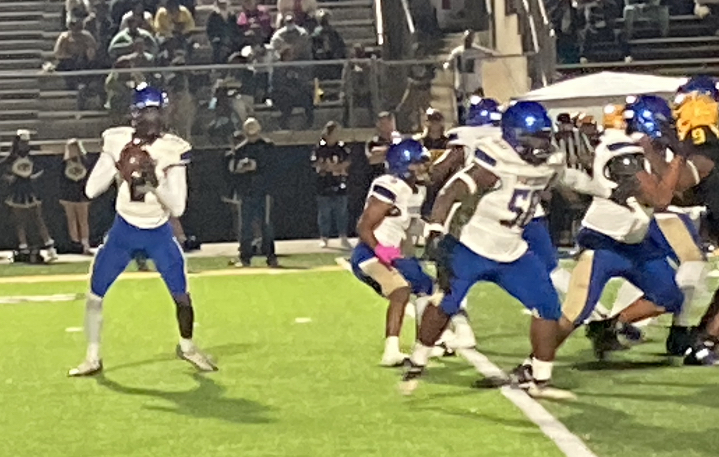 Sumter County senior quarterback Cameron Evans threw for two touchdowns and rushed for two more in the Panthers’ 46-26 loss to Worth County. Photo by Coleman Price

SYLVESTER, GA – In spite of a gallant effort offensively by Sumter County quarterback Cameron Evans and his teammates, the Sumter County Panthers (SCHS) suffered their eighth loss of the season against the Worth County Rams (WC) in a 46-26 shootout on Friday, October 28 at Worth County High School in Sylvester, GA.
Evans threw two touchdown passes and rushed for two more in this back-and forth, high-scoring affair.

The Panthers got off to a good start as Evans connected with Brandon Pope for a touchdown with 10:15 to go in the first quarter. The extra point by Jose Diaz was good and SCHS had a 7-0 lead.

The Rams responded by mounting a drive that resulted in a rushing touchdown by quarterback Chip Cooper. Cooper also scored the two-point conversion and the Rams led 8-7.

However, the Panthers fought back as Evans completed a scoring drive by scoring a touchdown on a quarterback keeper from seven yards out. The extra point by Diaz was good and SCHS led 14-8 with 2:54 to go in the first quarter.

But as the second quarter began, the Rams responded with another scoring drive of their own. They were able to march down the field and cap off the drive with an eight-yard run for a touchdown by Cooper. The extra point was good and the Panthers trailed 15-14.

Then with 5:32 to go before halftime, the Rams added to their lead when Cooper threw an 18-yard touchdown pass to Kaden Chester. The extra point was good and the Panthers trailed 22-14.

Once again, however, SCHS had a response as Pope took the ensuing kickoff 55 yards down to the WC 45-yard line. The drive stalled on the Panthers’ first three plays from scrimmage, but on fourth and two, Evans and the Panthers cashed in when he connected with Pope again, this time for a 40-yard touchdown pass. The Panthers tried to go for two, but running back D.J. Hurley’s halfback pass attempt to Pope fell incomplete. Nevertheless, SCHS only trailed 22-20 with 2:56 to go before halftime.

Near the end of the first half, the Rams thought they had another touchdown on a 70-yard pass play from Cooper, but it was called back due to a penalty against WC. The Panthers were able to take advantage on the very next play when Cooper’s pass was intercepted by SCHS defensive back Keaston Taylor. The Panthers weren’t able to put any more points on the board during the remainder of the half, but they went into halftime trailing 22-20.

However, as they had done throughout the first half, the SCHS offense responded with another scoring drive. The Panthers were able to move the ball down to the WC 12-yard line and Evans finished off the drive with a 12-yard touchdown on a quarterback keeper. The extra point was no good, but the Panthers kept themselves within striking distance as they trailed 29-26 with 5:16 to go in the third quarter.

Unfortunately for SCHS, that would be all the points they would score as the Rams added a field goal with 1:55 left in the third quarter and got another rushing touchdown from Cooper with 10:59 to go in the game.
Then with 6:21 left to play, Kaden Chester put the icing on the cake for the Rams with a four-yard rushing touchdown. The extra point was good and the Rams went on to beat the Panthers 46-26.