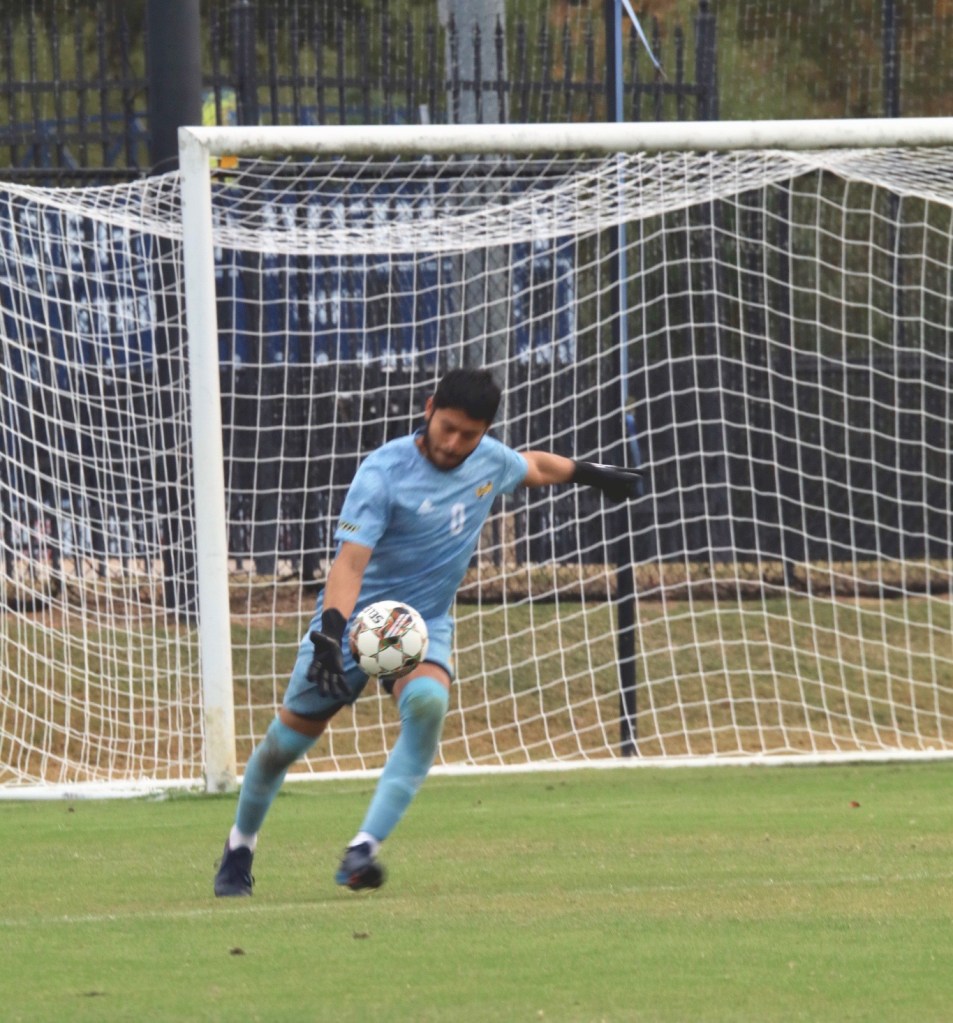 GREENWOOD, SC – The Georgia Southwestern Men’s Soccer Team (GSW) saw its season come to an end when the Hurricanes fell to #17-ranked Lander University 3-0 in the semifinals of the Peach Belt Conference Tournament on Sunday, October 30 at Van Taylor Stadium on the campus of Lander University (LU).

The Hurricanes were able to reach the PBC Semifinals with a 2-0 win over Young Harris College two days before, but they could not overcome the offensive pressure of the Bearcats, who scored one goal in the first half and two in the second to seal their victory.

In the 17th minute of play, GSW had a chance to take a 1-0 lead when Chris Salamatou took a shot on goal, but LU goalkeeper Lorenzo Ferrari was able to come up with the save.

Then in the 35th minute, the Bearcats got their first goal of the match when Max Bolton scored an unassisted goal. After that goal, neither team could find the back of the net during the remainder of the first half and the Hurricanes went into halftime trailing 1-0.

However, the Bearcats added to their lead seven minutes into the second half when Rob Dymond scored a goal off an assist from Max McNulty. Then in the 75th minute, LU took a 3-0 lead when Marco Gueli scored off another assist from McNulty.

The Bearcats continued to put pressure on the GSW back line and were awarded a penalty kick when GSW’s Cole Davison fouled Rylee Medlin inside the 18-yard box. However, GSW goalkeeper Juan Ramirez was able to save Kevin Rubazewski’s penalty kick to prevent LU from increasing its lead.

Unfortunately for the Hurricanes, they were not able to create any scoring chances for the remainder of the match and went on to lose to the Bearcats 3-0.

GSW was only able to get off two shots on goal during the entire match, while LU had nine shots on goal and connected on three of them.

GSW goalkeeper Juan Ramirez came up with six saves on the day for the Hurricanes, while his LU counterpart, Lorenzo Ferrari, had two saves.

LU (10-3-5), the #1 seed in the PBC Tournament, will move on to the tournament final and will host second-seeded Flagler College on Sunday, November 6 at 1 p.m.

The winner will advance to the NCAA Division II National Tournament.