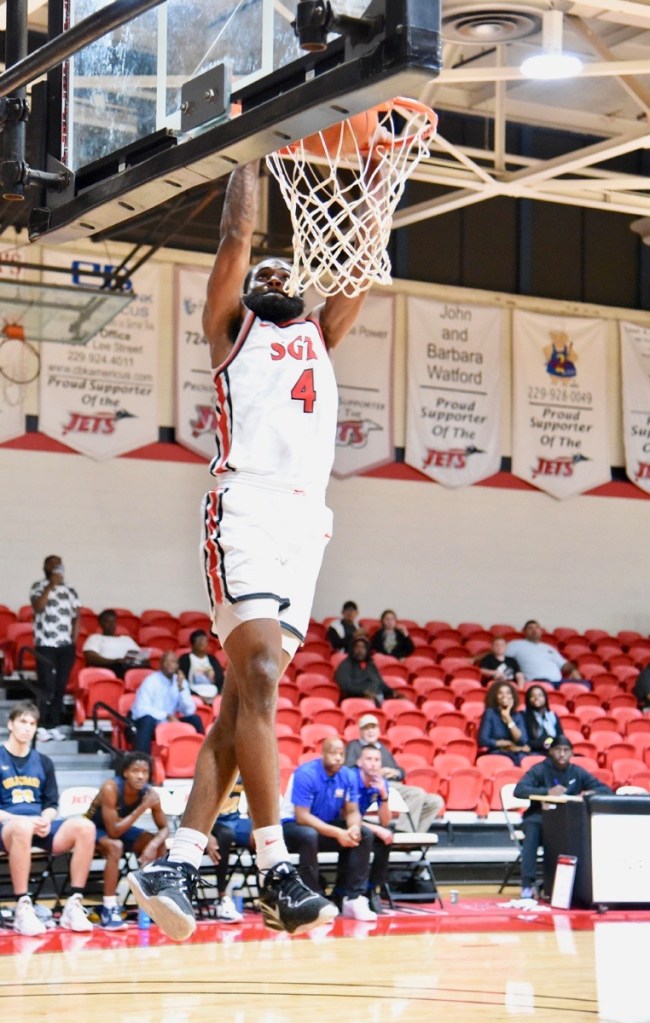 AMERICUS – Heart and hustle allowed the South Georgia Technical College Jets (SGTC) to overcome a 10-point deficit with less than 14 minutes on the clock and come away with a 79 – 74 victory over the Gulf Coast Commodores (GC) in the Jets first regular season game for the 2022 – 2023 basketball season.

“This was a great win,” said South Georgia Technical College Jets Head Coach Chris Ballauer.  “The first one of many, we hope.  I am very proud of these guys.  Gulf Coast is battle tested from playing in the panhandle of Florida and they had eight guys returning from last season.  We didn’t give up and we did what we needed to do in the final minutes to come from behind and win.”

The Jets jumped out to an early lead over GC in a slow-scoring first half that saw the Jets up 11 – 6 at the 10:46 mark.  The Commodores took a 14 – 13 lead with 8:29 in the half and despite the two teams swapping the lead seven times in the last nine minutes, GC went into the half with a narrow 29- 27 advantage.

SGTC came out cold in the second half and quickly fell behind 29 – 39 with 16:29 remaining in the game.  The Commodores managed to keep a 10-point lead for the first seven minutes of that period, but the Jets came back and outscored GC 10 to 1 in a minute of a half to pull within one point at 47 – 48 with 12:11 remaining before the final buzzer.

The Jets were able to finally take a 59 – 55 lead with 8:49 left in the game.  They maintained a narrow lead until the Commodores rallied in the final five minutes to regain the lead and go up 72 – 66 with under three minutes left on the clock.  There were 10 lead changes and five ties in the match-up.

Semaj Henderson, Ryan Djoussa, Nathan Wilson, and Aaron Pitts all stepped up in the final three minutes to turn that six-point deficit into a 79 – 74 victory for the Jets in their first regular season game.

“We made a lot of mental mistakes and turned the ball over way too many times, but those are things we can work on and improve,” said Coach Ballauer.  “I was really impressed with how they continued to hustle and not give up and that paid off with a big win.”

Not a single Jet was in double-figures in the first half.  Sophomore guard Semaj Henderson who played with Jacksonville State last season and freshman Deonte Williams from Sydney, Australia were the leading scorers in the first half with six points each.  Gulf Coast shot better from the floor and the three-point line than the Jets but SGTC hit 68 percent of their free-throws (17 of 25) while Gulf Coast only made 52.9 percent (9 of 17) on the night. 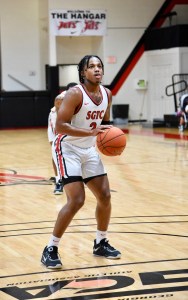 Sophomore guard Semaj Henderson, 2, from Chicago, IL, had a total of 13 points for the Jets in their first victory of the 2022 – 2023 season.
Photo by SGTC Athletics

Sophomore guard Aaron Pitts from Columbus, Georgia, wound up as the leading scorer for the Jets with 18 points on the night.  Thirteen of those came in the second half.  Sophomore guard Semaj Henderson was the only other Jet in double figures with 13 points.  Returning sophomore forward Bryce Turner contributed nine points on the night and he was followed by freshman Tim Loud from Winder, GA; freshman guard Deonte Williams from Sydney, Australia; and Justin Evans from Covington, GA, who each scored eight points.  Returning sophomore Nathan Wilson scored six points; freshman Ryan Djoussa had five, and sophomore Kallin Fonesca from Breaux Bridge, LA closed out the scoring with four points.

The Lady Jets travel to Panama City, FL to take on the Gulf Coast women today at 5:30 p.m. CST and then will head to Wilmington, NC for the Cape Fear Classic where they will take on Cape Fear Community College at 3 p.m. on Saturday, November 5th and Bryant & Stratton College on Sunday, November 6th at 11 a.m.  They will play their first home game on Wednesday, November 9th against Central Georgia Technical College at 5:30 p.m. and then host Andrew College on Saturday, November 12th at 1 p.m. in Georgia Collegiate Athletic Association Division I games.