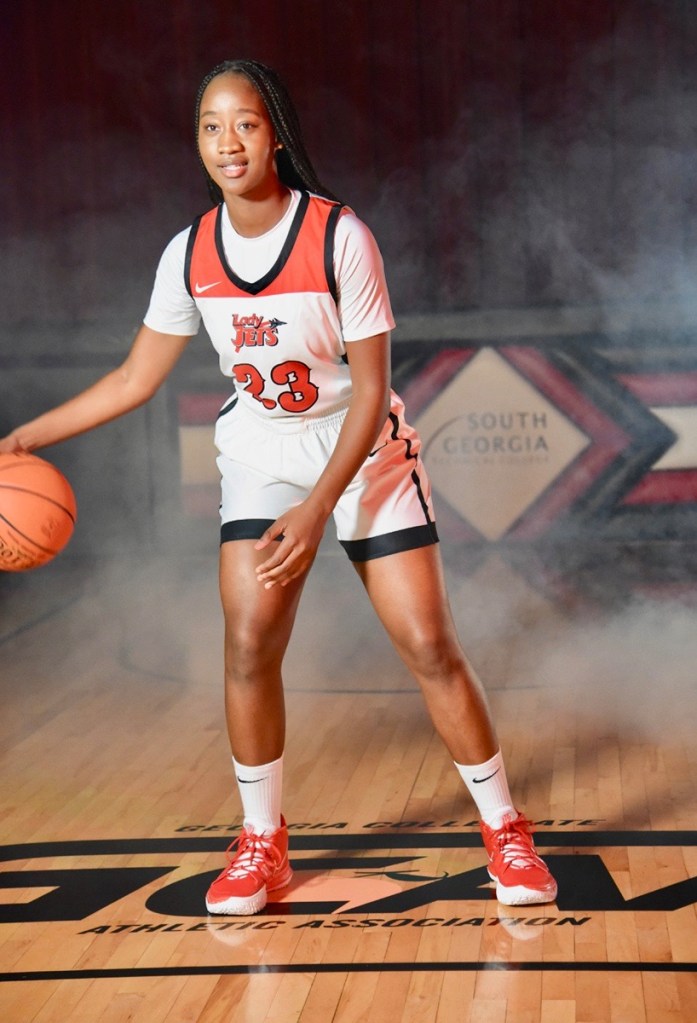 Fanta Gassama, sophomore center from Mataro, Spain, was the top scorer for the Lady Jets in their loss to Gulf Coast State College. She had 13 points and 15 rebounds. Photo by SGTC Athletics

This was the first time that the Lady Jets had dropped a season opener in the eleven years with James Frey at the helm of the women’s basketball program.  “We have never opened the season against the 16th best team in the nation so maybe that was my fault for scheduling them so early in the season. Gulf Coast made 17 three-pointers and it is very tough to be a good team when they do that.,” Coach Frey said. “They don’t usually shoot the three that much but they were on fire last night.”

Despite the loss against a very good GC team, Coach Frey and the Lady Jets are pushing ahead.  “We’re looking forward to getting back to work today and correcting the mistakes we had at Gulf Coast,” Frey said. “Most of those mistakes are fixable and having a chance to go on the road again Saturday and Sunday and play two good teams will allow us to see if we have improved.”

The Lady Jets will travel to Wilmington, NC on Saturday, November 5th and Sunday, November 6th to play in the Cape Fear Classic.  They will play Cape Fear at 3 p.m. Saturday and Bryant & Stratton College on Sunday at 11 a.m.

“Both Cape Fear and Bryant & Stratton are quality programs with good coaches so it will be a great test for our young ladies.  We have to bounce back and not let one game cost us another one,” Frey said.

Only two SGTC Lady Jets managed to reach double-figures in scoring.  Sophomore center Fanta Gassama had a double-double night with 13 points and 15 rebounds.  Sophomore point guard Loes Rozing was the only other Lady Jets in double figures with 12 points.  She was three of three from the three-point line and made half of the Lady Jets three-point shots.

Following their road trip to Wilmington, NC this weekend, the Lady Jets will host Central Georgia Technical College at 5:30 p.m. on Wednesday, November 9th.  This will be the first home game and the first Georgia College Athletic Association (GCAA) Conference game for the Lady Jets.  SGTC will also be at home on Saturday, November 12th when the Lady Jets host Andrew College at 1 p.m.  This is a GCAA conference match-up.

The Jets will also play at home next week.  They will host Franklin Prep at 7 p.m. on Tuesday, November 8th and then host the Jets Classic on Friday, November 11th and Saturday, November 12th.  The Jets take on Eastern Florida State College in the second half of the action Friday night at 7:30 p.m. and then play Chattahoochee Valley Community College at 5:30 p.m. Saturday.