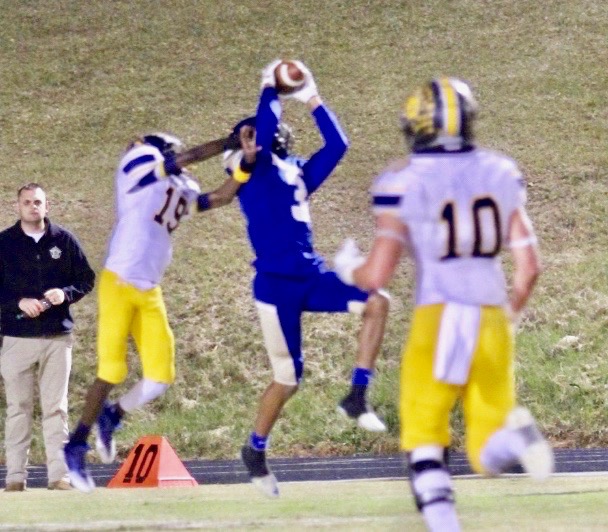 AMERICUS – It has been a long and difficult season for Sumter County first year head football coach Clifford Fedd and his team. Having lost seven straight and missing the state playoffs for the third straight year, the Panthers (1-9) were hoping to salvage this disappointing season with a win over another struggling team; the winless Jeff Davis Yellow jackets (JDH). For one half of play, it looked as if the Panthers were going to end their season on a positive note as they led 19-0 at halftime. However, the second half belonged to the Yellow Jackets. They scored 22 unanswered points by taking advantage of a struggling SCHS offense and forcing two turnovers on their way to a 22-19 victory over the Panthers on Friday, November 4 at Alton Shell Stadium.

Both teams came into this game tied for last place in the GHSA Region 1-AA standings at 0-5, but with JDH getting the victory, both teams will end their seasons at 1-9 overall, but the Panthers will finish in last place in the region at 0-6.

Things started off well for the Panthers in the first quarter. The SCHS defense forced a fumble and Broshawn Snead picked up the loose football and ran it in for a touchdown. The extra point was no good, but the Panthers had an early 6-0 lead. 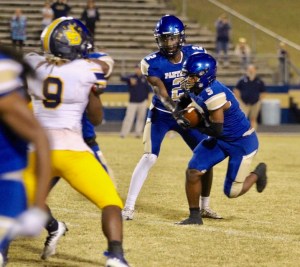 The SCHS defense would later force another turnover as Corderian Leverett came up with an interception. The Panthers’ offense took advantage of the turnover when quarterback Cameron Evans threw a touchdown pass to Traveon Lamar. The extra point by Jose Diaz was good and SCHS had a 13-0 lead with 9:10 to go before halftime.

As the first half continued, the Panthers continued to experience good fortune as the defense came up with its third turnover of the game. However, Evans was injured late in the first half and was replaced by freshman Ishmael Jones.

In spite of the injury to Evans, the Panthers continued to make plays on defense. SCHS outside Linebacker Karounga Keita came up with the Panthers’ second interception of the game and SCHS had another opportunity to extend its lead. A touchdown run by running back D. J. Hurley was called back due to a penalty, but with 15 seconds to go before halftime, Jones threw a 10-yard touchdown pass to Brandon Pope. The extra point by Diaz was good and the panthers went into halftime with a 19-0 lead.

However, a high school football game has two halves, not just one. As well as the Panthers played in the first half, things were about to change drastically for them in the second half. With 5:04 to go in the third quarter, JDH running back Ty Weaver scored the Yellow Jackets’ first touchdown of the game from three yards out. The extra point was good and the Panthers’ lead was cut to 19-7 by the end of the third quarter.

The Yellow Jackets’ start in the second half clearly shifted momentum to their side and it continued to build. With 10:50 to go in the game, Weaver scored another rushing touchdown from three yards out. The extra point was good and the Panthers, who once led 19-0, found themselves only up 19-14. 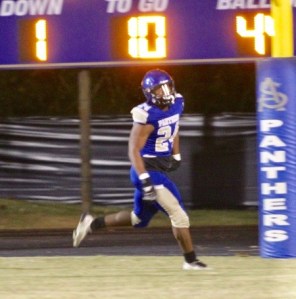 Sumter County junior defensive end Broshawn Snead picked up a fumble and ran it in for touchdown in the first half of the Panthers’ season finale against Jeff Davis.
Photo by Carla Whitley

SCHS tried to get going on offense to stop the momentum of the Yellow jackets. The Panthers were able to move the ball deep into JDH territory. However, Evans, who returned to action, tried to find Pope for another touchdown, but his pass was picked off in the end zone by Jude Worthington. This was a huge drive killer for the Panthers and it gave the Yellow Jackets even more momentum to pull off a come-from-behind victory with 8:20 still to play in the game.

On the Yellow Jackets’ next possession, they orchestrated a drive that was capped off with a touchdown pass from quarterback Colby Beach to Karter Galbreath. Beach found Galbreath on a slant pass and Galbreath was able to break a tackle and score.

After JDH called timeout to discuss whether or not to go for two, they decided to try the two-point conversion and they succeed when Galbreath threw a short pass to Beach in the end zone. At one time, the Panthers were in control and led 19-0. Now, with 4:47 to go in the game, SCHS found itself trailing JDH 22-19.

After the Yellow jackets kicked the ball out of bounds on the ensuing kickoff, the Panthers had excellent field position at their 47-yard line. However, the drive bogged down on the first three plays. On fourth and six from the JDH 36-yard line, the Panthers decided to go for it, but Evans’ pass to Pope went out of bounds and the ball went back to the Yellow Jackets on downs with 2:08 to go in the game.

However, the SCHS defense came up big again by forcing another turnover on a fumble at the JDH 43. Just as it looked like the Yellow Jackets were going to run the clock out and salt away the victory, the Panthers were able to give themselves another chance to salvage a victory.

With a little over a minute left to play, Evans completed a pass to Lamar and the Panthers called time out. They had the ball fourth and one at the JDH 34-yard line. Out of the timeout, SCHS was ready to go before the Yellow Jackets called timeout.

After the JDH timeout, Evans gained first down yardage on a quarterback sneak, but the Panthers were penalized due to a false start, making it fourth down and six.

On the fourth down play, Evans tried to find Phagan Lewis for a first down completion, but his pass was picked off and the Yellow Jackets went on to win 22-19.