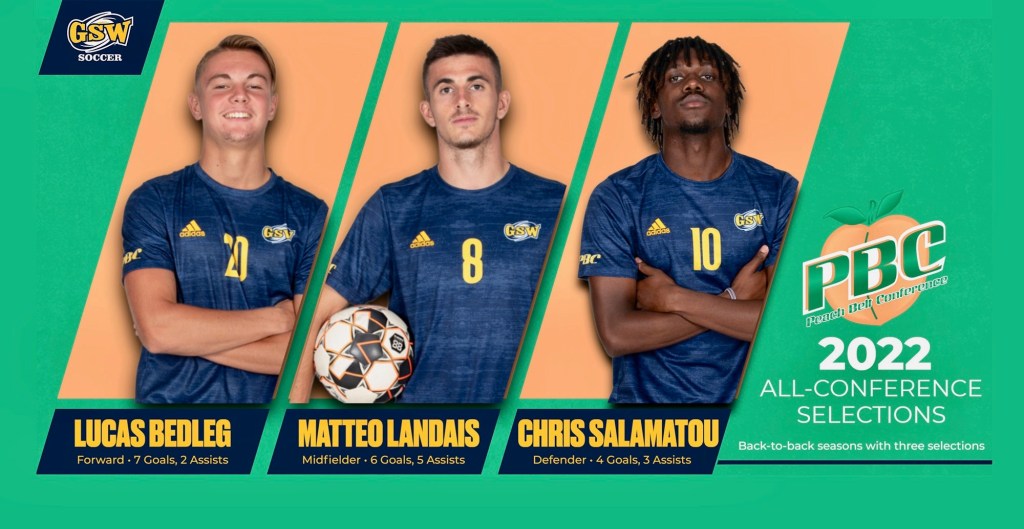 GSW Men’s Soccer Players Lucas Bedleg, Matteo Landais and Chris Salamatou earned All-Peach Belt Conference honors for their accomplishments on the pitch for the Hurricanes during the 2022 season. Photo by GSW Athletics

Bedleg started all 18 matches in 2022 and logged 1110 minutes (61.6 per match average). He led the team with eight goals and 18 points that included a pair of assists.

The freshman from Andelarrot, France, turned in a hat trick on Aug. 31 when he scored three goals against Middle Georgia State University. He added a second game-winning goal on Oct. 28 in the 2-0 Peach Belt Conference Tournament quarterfinal victory over Young Harris College. Bedleg ranked fifth in the PBC in goals scored.

Landais appeared in 13 matches this fall and started 12 of those contests. He logged 898 minutes and led the team with five assists. Landais added six goals, four were game-winning scores.

The junior from Vitre, France, scored a goal in each of the Hurricanes first three matches. He scored two goals on Sept. 10 against the University of South Carolina Aiken and four days later had a pair of assists and a goal in the 4-0 win at Clayton State University. Landais was the PBC Player of the Week on Aug. 29 and he finished the season tied for seventh in the conference in goals and second in assists.

Salamatou started all 18 matches for the Hurricanes and logged a team-high 1289 minutes (71.6 per match average). He scored five goals and added three assists.

The senior from Niort, France, led a defense that posted six shutouts this season. Salamatou was a weapon on offense down the stretch with four goals over the Hurricanes final seven matches. He had a season-best two scores on Oct. 12 against Young Harris and added an insurance goal in the postseason victory over Young Harris on Oct. 28. Salamatou is the only repeat all-conference award winner from GSW this season after being named to the second team in the spring of 2021.

The Hurricanes trio led the program to a return trip to the postseason in 2022 and the first PBC Tournament win in program history. GSW has 14 all-conference selections in school history with six coming in the last two seasons.