Wildcats click on all cylinders in first round win over GMC 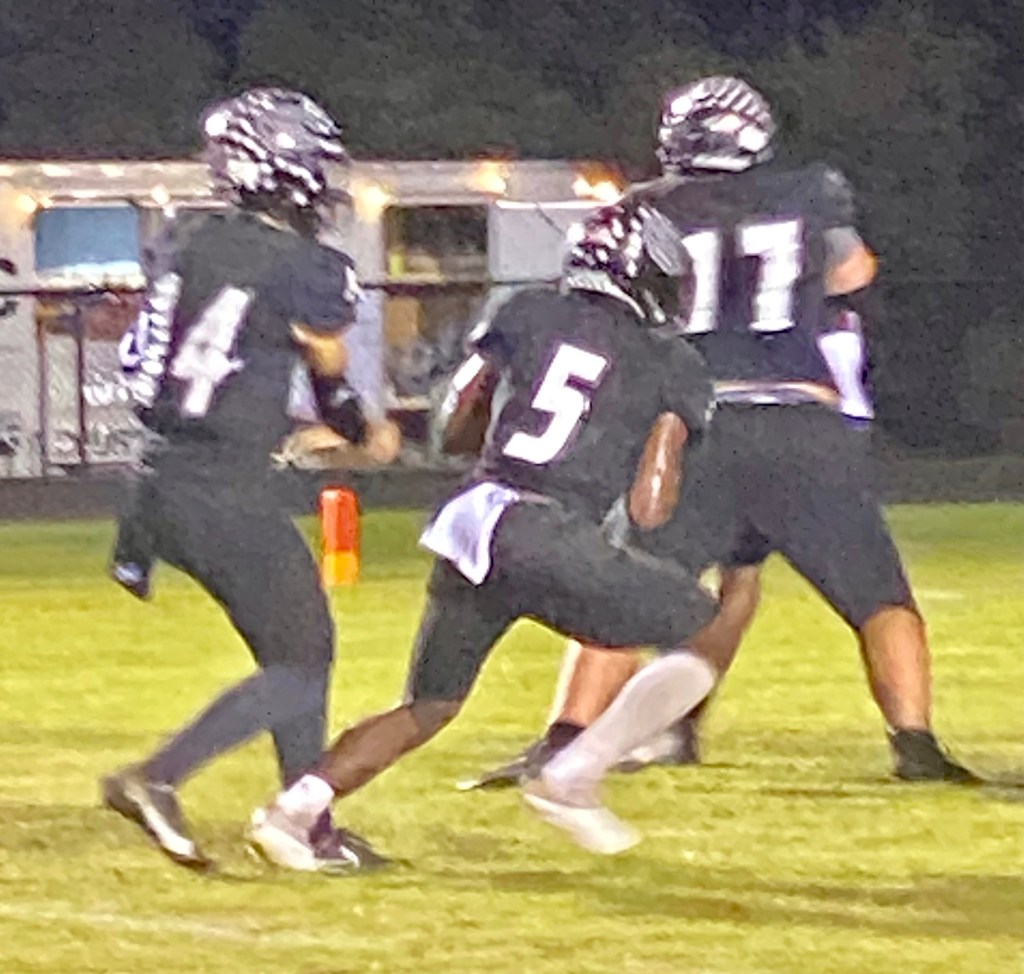 Schley County senior running back Malachi Banks (#5) scored two rushing touchdowns in the Wildcats’ 51-0 win over Georgia Military College in the first round of the GHSA Class A Division 2 State Playoffs. Photo by Ken Gustafson

ELLAVILLE – The Schley County High School Football Team (SCHS) operated as one well-oiled machine against the Bulldogs of Georgia Military College (GMC), who made the journey to Ellaville from Georgia’s first capital, Milledgeville, to take on the Wildcats in the first round of the Georgia High School Association (GHSA) Class A Division 2 State Playoffs. The SCHS offense scored on almost every possession and the defense was able to shut down the GMC offense, while forcing numerous turnovers, including a pick six by Carson Westbrook in the first half. As a result of this dominating performance, the Wildcats advanced into the second round of the playoffs with a 51-0 drubbing of GMC on Friday, November 11 at Wildcat Stadium.

SCHS (9-2) will host Washington-Wilkes in the second round. The Tigers (8-3) defeated Mt. Zion 35-14 in their first round game on Friday.

“Our kids played well. We knew what they (GMC) were going to do. Coach (Richard) McCorkle (Offensive Coordinator) and Coach (Tim) Peavey (Defensive Coordinator) did a really, really good job of getting the offensive and defensive game plans together and it worked. We practiced it well this week and we came out and executed what we tried to work,” SCHS Head Coach Darren Alford said. 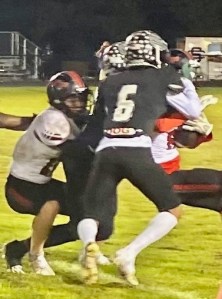 The Bulldogs won the toss, but elected to defer until the second half. This gave the Wildcats the chance to set the tone of the game early, which they did. SCHS moved the ball down the field with efficiency on its first drive of the game and finished off the drive with a three-yard rushing touchdown by Malachi Banks. The extra point by Miguel Yanez-Rueda was good and SCHS had an early 7-0 lead with 8:35 left in the first quarter.

The SCHS defense was able to stifle the GMC offense on its first possession of the game and the Wildcat offense once again was able to move the ball deep into the Bulldogs’ territory. However, GMC forced a fumble and recovered the ball, negating what looked to be another sure drive ending in an SCHS touchdown. However, the Wildcat defense once again neutralized the Bulldogs on their next offensive possession, which gave the SCHS offense another opportunity to put more points on the board with another scoring drive. 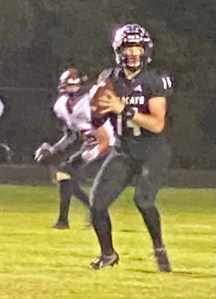 Once again, the Wildcats used their running game, along with a mix of the passing game, to finish off another scoring drive. Kanazawa was able to connect with Sam Forehand on a passing play that gained yardage inside the GMC 20-yard line. Then Kanazawa finished off the drive with a nine-yard touchdown pass to Clinton Jackson. Yanez-Rueda’s extra point was good and SCHS led 14-0 with 2:15 still to play in the first quarter.

While both the SCHS offense and defense were in top form, the SCHS special teams decided to get in on the act as well. The Wildcats forced the Bulldogs into another punting situation, but this time from their own end zone. SCHS linebacker Jack Clark took advantage of the situation by blocking the punt and forcing a safety to give the Wildcats a 16-0 lead. 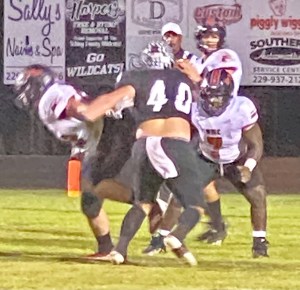 However, that score would not stay that way for long. On GMC’s next possession, quarterback Tyler Saunders was picked off by SCHS safety Carson Westbrook, who took the ball back for a pick six. Yanez-Rueda’s extra point was good and the Wildcats led 23-0 with 7:20 to go before halftime.

A couple of minutes later, Westbrook would get his hands on the ball once again, as Kanazawa found him on a backwards pass. Westbrook then found his way into the end zone for his second touchdown of the night. The extra point by Yanez-Rueda was good and with a little over a minute still to play before halftime, the Wildcats had expanded their lead to 30-0. 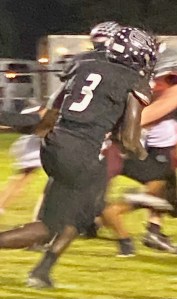 During the last minute of the first half, the Wildcats forced a fumble and it was recovered by Clinton Jackson, but the offense gave the ball right back to the Bulldogs when Kanazawa’s pass was intercepted by GMC defensive end Jose Caballero. Nevertheless, no harm was done through that interception and the Wildcats went into halftime in total control, leading 30-0.

The Bulldogs got the ball to start the second half, but the SCHS defense quickly squelched any hopes the Bulldogs had of a scoring drive when Saunders’ pass was intercepted by Clinton Jackson. This gave the Wildcats another opportunity to put more points on the board, which they did when Kanazawa found Westbrook on a screen pass. Westbrook then ran the ball all the way to the end zone for his third touchdown of the night. The extra point by Yanez-Rueda was good and SCHS had a 37-0 lead with 7:20 to go in the third quarter.

However, just as quick as Westbrook scored his third touchdown, the Wildcats were just as quick to get the ball back as Jackson intercepted another pass from Saunders and took the ball down to the GMC five-yard line. SCHS quickly cashed in on the turnover when Kanazawa found JaLewis Solomon in the end zone for a five-yard touchdown pass. Yanez-Rueda’s extra point was good and the Wildcats led 44-0 late in the third quarter.

Even with the big lead, the SCHS defense continued to stifle the GMC offense. On the Bulldogs’ next possession, Jackson forced a fumble on a strip sack and Trenton Stubbs recovered the fumble for the Wildcats deep in GMC territory. 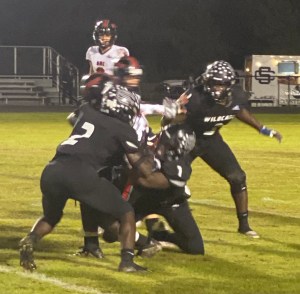 The SCHS offense went right to work and cashed in on the turnover when Banks ran the ball straight up the middle for an 18-yard rushing touchdown, his second of the night. Yanez-Rueda’s extra point was good and SCHS led 51-0 with the fourth quarter still to play.

On GMC’s next possession, the Bulldogs finally were able to generate some offense when running back Bryce Smith broke through the SCHS defensive line and ran the ball down to the Wildcats’ 21-yard line. However, the SCHS defense bowed up and stopped GMC on fourth down when Saunders’ pass intended for Rance Williams in the end zone fell incomplete.

In the fourth quarter, the Wildcats were able to play their younger players and give them some valuable playing experience. On the defensive side of the ball, Jonathan Leggett came up with a tackle and Kyler Dupre was able to get some carries on offense.

The Wildcats will now turn their attention to the Tigers of Washington-Wilkes (8-3), whom they will host next Friday night, November 18 in the second round of the GHSA Class A Division 2 State Playoffs. Kickoff is set for 7:30 p.m.