Wildcats blow big lead, but hold on to win at Marion County 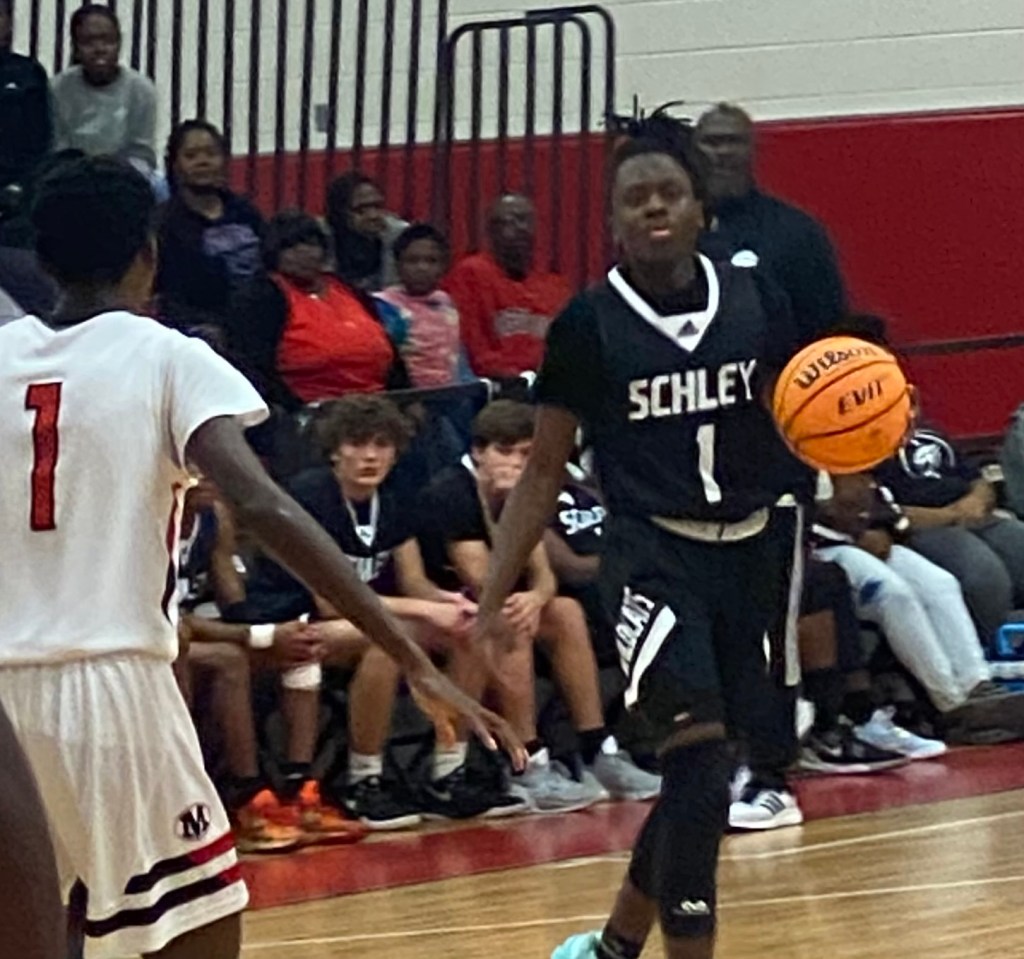 Schley County guard Javoris Scott (#1 in black) led the Wildcats in scoring with 17 points in their 49-44 victory over Marion County. Photo by Ken Gustafson

BUENA VISTA, GA – The Schley County High School boys’ basketball team (SCHS) jumped out to a 14-0 lead in the first quarter and they had a 31-20 lead over the Marion County Eagles (MC) at the half. However, MC stormed out of the gate early in the second half, outscoring the Wildcats 11-4 in the third quarter and nearly pulled off a come-from-behind victory. Nevertheless, SCHS was able to make the plays down the stretch and held on for a hard-fought 49-44 victory over their archrivals for their first win of the season Tuesday evening, December 13 at Marion County High School.

Javoris Scott led the Wildcats in scoring with 17 points and Jordan Hudson poured in 11. Tyrese Cook was also in double-figures scoring with 10 points and Danny Dupree had six points on two three-pointers.

The Wildcats (1-1) got off to a dream start in the first quarter as they jumped out to a 14-0 lead. The Eagles did not get on the scoreboard until the 2:17 mark of the first quarter when Jayden Richardson made one free throw.

Over the remainder of the first half, the Wildcats cooled off somewhat as they struggled offensively and were struggling with turnovers. Nevertheless, they still maintained a 31-20 lead at halftime.

Scott scored 11 of his game total of 17 points in the first half.

However, things changed drastically in the third quarter as the Eagles went on an 11-1 run before Cook made one of two foul shots to give SCHS a slim 33-31 lead. MC turned up their defensive pressure in the third quarter and the Wildcats, who at one time had a 14-0 lead, were struggling to find the basket and were turning the ball over. With one more quarter still to play, the Wildcats were hanging on with a 35-31 lead.

Over the first three minutes of the fourth quarter, SCHS outscored MC 7-5.

However, a few minutes later, an ally oop dunk by Clinton Jackson electrified the SCHS supporters in the crowd and it gave the Wildcats a 45-38 lead with a little over three minutes to play in the contest.

Over the next minute and a half, both teams were struggling offensively and with turnovers, but both teams all of a sudden started trading baskets and with 26.8 seconds left, the Wildcats had a 47-44 lead when timeout was called. 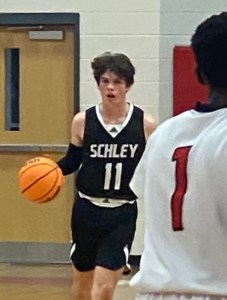 Schley County point guard Carson Westbrook scored three-points on a three-pointer in the first quarter in the Wildcats’ 49-44 win at Marion County.
Photo by Ken Gustafson

However, a flagrant foul had been called against the Eagles before that timeout, which resulted in a technical foul. Scott made both free throws and the Wildcats were able to hang on for a 49-44 victory.

Darion Lemons led MC (0-3) in scoring with 15 points and Sakeevious Holloman scored 13 in the losing cause.

The Wildcats will try to build on this victory when they travel to Cusseta, GA on Friday, December 16 to take on Chattahoochee County. Tip off is scheduled for 7:30 p.m.