Smith and Exley spearhead Raiders to victory over SGA 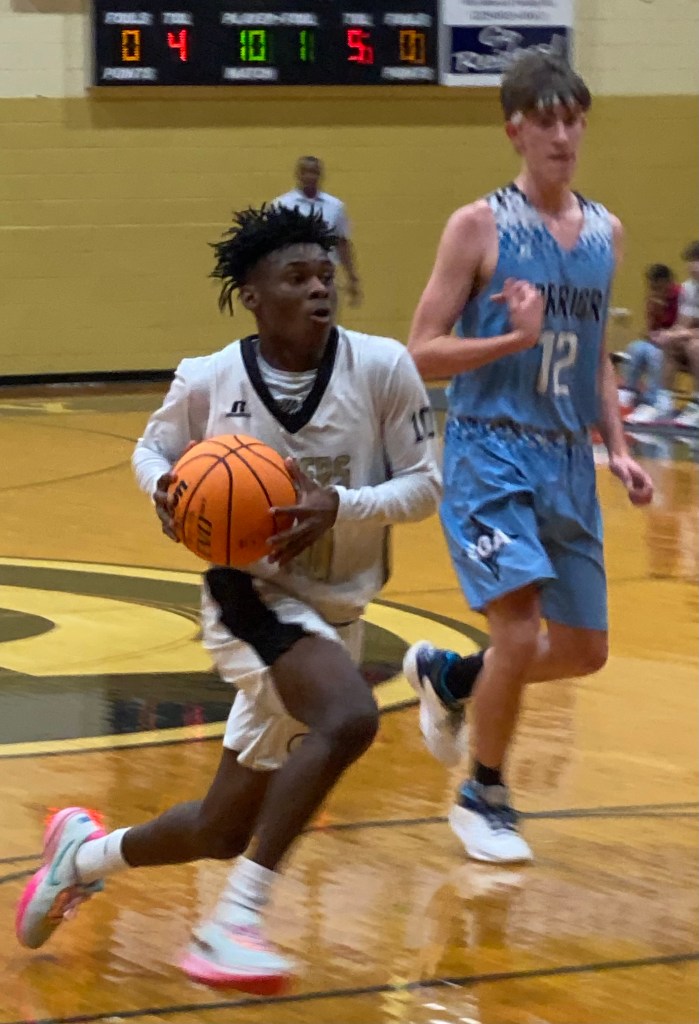 AMERICUS – Southland Academy (SAR) seniors Cedric Smith and Luke Exley put the Raiders on their shoulders Thursday night and led SAR to a 60-47 victory over the Southwest Georgia Academy Warriors at the Melvin Kinslow Gymnasium. Smith scored 21 points to lead the Raiders and Exley poured in 20 in the winning cause.

In addition to the performances of Smith and Exley, senior guard Carlos Tyson chipped in eight points and junior forward Perry Usher scored six points to help lead the Raiders to victory.

Though the Raiders won the game and improved their overall record to 8-3, they got off to a slow start in this game and it has Head Coach Kevin Douglas somewhat concerned.

“It was a well-played game. They (SGA) played us as hard as they could,” Douglas said. “We beat them pretty heavily at their spot, but you can tell. They’ve gotten better over the weeks. It was a great win for us, but there are certain things we’ve got to work on. We can’t start slow. We cannot start slow and try to dig ourselves out of that hole. We’ve got to jump on them really quick and continue to add on to that throughout the game.”

In the previous meeting between these two teams in Damascus, GA on December 5, the Raiders won handally by the score of 70-39.

The Warriors jumped out to a 6-0 lead to start the game, but the Raiders, led by Smith, stormed back to cut their deficit to 6-5. 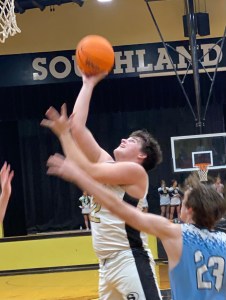 Southland Academy senior forward Luke Exley goes up for a rebound. Exley scored 20 points in the Raiders’ win over the Warriors.
Photo by Ken Gustafson

However, SGA responded once again when Noah Hayman drained a three-pointer and it led to a 9-0 run by the Warriors and a 15-5 lead for them. Once again, however, SAR got up off the mat and stormed back with 10 unanswered points to tie the game at 15-15. Much of this was due to the leadership of Smith, who was able to score on the dribble drive and dish the ball to teammates for assists.

Over the final four minutes of the first half, both teams traded baskets at a fast paced, track meet style of tempo, but with 2:04 to go, Smith rebounded a missed shot and scored to give the Raiders a 21-20 lead. Shortly thereafter, a technical foul was called against SGA and Banks Simmons was able to make both technical foul shots to give SAR a 23-20 lead.

Then with 1:25 to go, Simmons dished the ball to Smith, who scored on the inside and was fouled on the play. Smith completed the three-point play and the Raiders had a 26-20 lead before Smith later dished the ball off to Tyson, who scored on a one-handed slam-dunk. The Raiders ran the clock down to 1.8 seconds on their last possession of the half, but Luke Exley’s three-point attempt at the buzzer fell short. Nevertheless, after a past-paced, run-and-gun first half, the Raiders had a 28-22 lead. 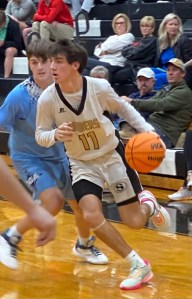 Over the final four minutes of the third quarter and into the fourth quarter, both teams traded baskets, but the Raiders took a 45-32 lead when Perry Usher drilled a three-pointer from the right side, prompting a timeout by SGA with 5:53 to go in the game.

Over the final four and a half minutes of the contest, the Raiders continued to maintain their intensity on defense and they were able to execute on offense. The Warriors were able to get to within eight at 54-46 on a three-pointer from Colt Williams, but nevertheless, that would be as close as SGA would get and the Raiders would go on to secure a 60-47 victory.

SGA (4-6) was led in scoring by Lynton Jernigan, who scored 17 points. Colt Williams also scored in double figures with 12 points in the losing cause.

The Raiders will try to continue their winning ways when they begin GIAA Region 3-AAA play against Valwood in Valdosta, GA on Friday, January 6. Tip off for that game is scheduled for 7:45 p.m.