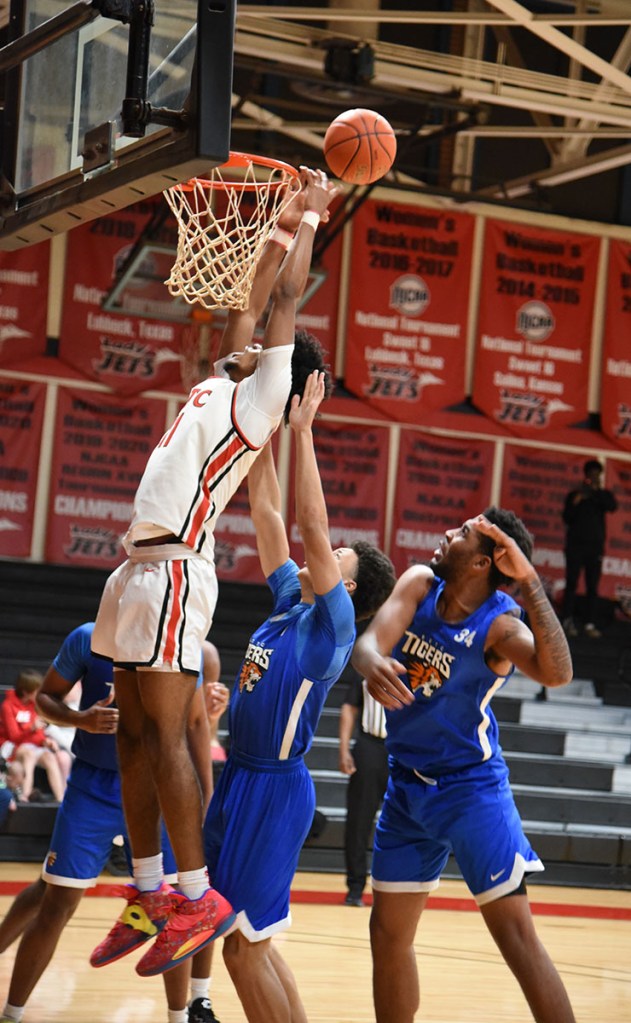 Bryce Turner (#11) was the top scorer for the Jets in their first conference win over Southern Crescent. Photo by SGTC Athletics

The Jets were able to take a 34 – 23 lead over Southern Crescent at the end of the first half and despite a late run in the second half, the Jets hung to take the 74 – 67 victory and their first GCAA conference win.

Sophomore Bryce Turner was the top scorer for the Jets in that match-up with 16 points.  He also had six rebounds and a steal.  Deonte Williams was close behind with 15 points and four rebounds.  Aaron Pitts was the only other Jet in double digits with 11 points, two rebounds and four assists.

In the match-up with South Georgia State in Waycross three Jets tied for top scoring honors.  Semaj Henderson, Aaron Pitts and Ryan Djoussa all contributed 11 points each.  Nathan Wilson had eight points in that match-up.

The Jets will be looking for their second consecutive victory tonight at 7 p.m. when then host Gordon State College at 7 p.m.  Gordon is 0 – 2 in the conference with losses to South Georgia State and East Georgia.

South Georgia Tech will travel to Albany on Thursday for a 7 p.m. game against Albany Tech and then return home on Saturday for a 3 p.m. GCAA conference game with Central Georgia Tech.  The Lady Jets will be in Albany on Saturday for a conference game with Albany Tech.  They travel to Denmark Tech on January 25th and then to East Georgia on January 28th before returning home for a double header with the Jets and Central Georgia Tech on February 1st at 5:30 p.m.  The Jets play Andrew College at 7 p.m.