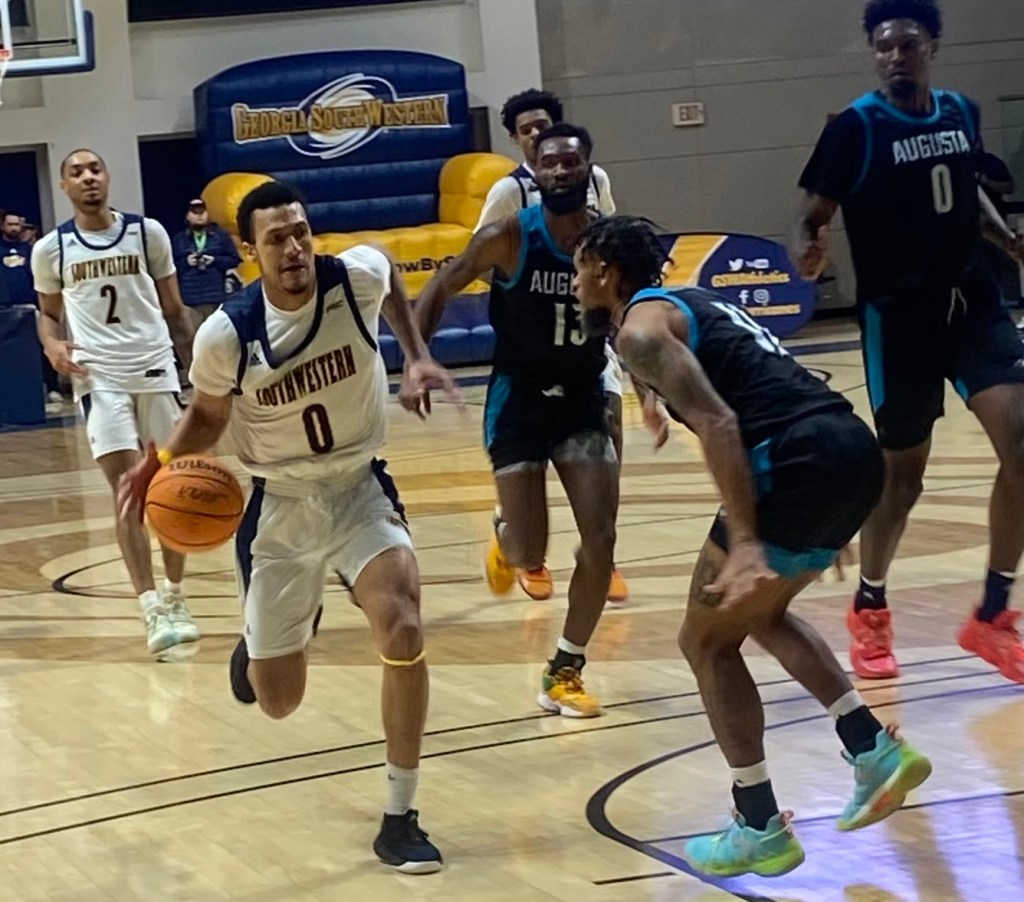 GSW senior guard Brian Tolefree led the Hurricanes in scoring with 14 points in their 66-60 loss to the #6 ranked Jaguars of Augusta University. Photo by Ken Gustafson

After the game, GSW Head Coach Aaron Coombs stated that while his club is getting better, it still has a ways to go to match the toughness and skill of the sixth ranked Jaguars.

“You saw the difference in the two programs right now. Augusta is just a little bit tougher and a little bit better,” Coombs said. “We cut it to two, we get them to miss and we can’t get the rebound.” Coombs was referring to the Jaguars’ next to last possession when with 19 seconds and the Hurricanes trailing 62-60, GSW had an opportunity to get a stop and get the ball back to either tie or win the game. However, the Hurricanes were unable to get a defensive rebound on a missed shot and AU’s Ja’Queze Kirby was there for the put back to give the Jaguars a 64-60 lead. Coombs also referenced the fact that his team could not get stops at other times with just a few seconds on the shot clock, which proved to be costly. 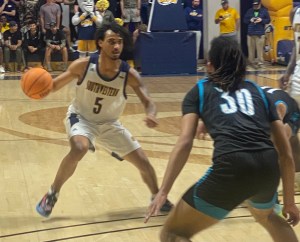 GSW senior point guard Phillip Burwell scored 10 points and dished out six assists in the Hurricanes’ 66-60 defeat at the hands of #6 Augusta University at the Storm Dome on Wednesday evening, January 18.
Photo by Ken Gustafson

Another factor that proved costly for GSW was free throw shooting. The Hurricanes only got to the line seven times during the entire contest and only went 3-7 (42.9 percent). Late in the game with a little less than seven minutes to go, they missed three foul shots that might have made a difference in the outcome of the game. As for the Jaguars, they got to the line 22 times and made 14-22 foul shots (63.6 percent).

GSW outplayed Augusta in both field goals made (26-23) and field goal percentage (45.6-41.1). The Hurricanes’ largest lead was 8-4 at around the 17:00 mark of the first half and this was the seventh straight game that Burwell scored in double digits. 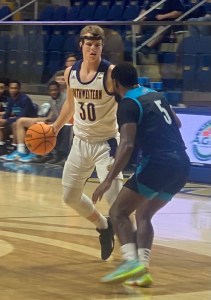 GSW sophomore guard Lars Nilsen scored five points, including one made three-pointer, in the Hurricanes’ loss to the Jaguars.
Photo by Ken Gustafson

Tyshaun Crawford led AU in scoring with 22 points, Miguel Arnold poured in 17 and Ja’Queze Kirby was also in double digits for the Jaguars with 14 points.

The loss drops GSW to 8-7 on the season and 2-5 in Peach Belt Conference play.

The Hurricanes will go on the road to face Lander University (13-4, 5-2 PBC) for the first half of their two-game season series at Finis Horne Arena. Lander leads the all time series 14-8 and the start time for the game is scheduled for 3:30 p.m. on Saturday, January 21.