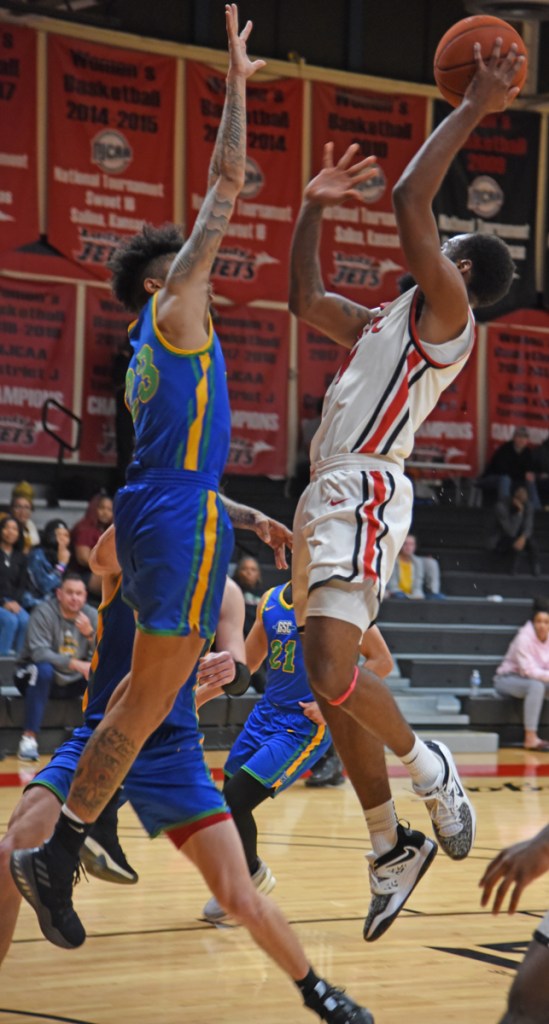 SGTC sophomore guard Aaron Pitts Jr. was the top scorer for the Jets in the 80 – 76 loss to Gordon State College. Photo by SGTC Athletics

AMERICUS – A banked three-point shot at the buzzer forced the South Georgia Technical College Jets into overtime against the Gordon State College Highlanders.  Gordon State rode that momentum into the five-minute overtime session and outscored the Jets 11 – 7 to take the 80 – 76 victory.

“We had opportunities to walk away with a win tonight,” said SGTC head coach Chris Ballauer.  “We just failed to take advantage of those opportunities and it caught up with us in the end. We have got to find a way to win these close ones because now every game counts because this is conference play.”

The Jets are now 1 – 2 in the Georgia Collegiate Athletic Association (GCAA) conference and 4 – 12 overall. Gordan State moved to 1 – 2 in the GCAA and 9 – 7 on the season.  South Georgia State College is currently in first place in the conference with a 3 – 0 record followed by Andrew College (2 – 0) and Georgia Highlands (1 – 0).

Sophomore guard Aaron Pitts from Columbus, GA, was the leading scorer for the Jets.  He had 16 points, all of which came in the second half and overtime. Sophomore forward Bryce Turner accounted for 15 points and six rebounds and freshman guard Deonte Williams from Sydney, Australia tossed in 14 points. Sophomore guard Kallin Fonseca was three of four from the three-point line and two of two from the foul line to close out the double-digit scoring with 11 points.

Sophomore forward Nathan Wilson scored eight points and pulled down 11 rebounds.  Tim Loud and Jordan Brown had five and four points respectively and then Justin Evans came away with three points to close out the Jets scoring.

Gordon State got on the scoreboard first and went up 36 – 30 at the end of the first half.  Gordon continued to outscore the Jets in the second half and went up 48 – 39 before the Jets came back and took the lead. The two teams changed leads 12 times and had eight ties.

The Jets were up 69 – 66 with seven seconds remaining on the clock when Gordon State College inbounded the ball and went the length of the court before banking a three-point shot at the buzzer to tie the game at 69 – 69 and force the overtime period.

Gordon State came out and scored the first points in overtime and outpaced the Jets 11 – 7 to secure the 80 – 76 conference win.

The Jets will travel to Albany Tech on Thursday, January 19th for a 7 p.m. game and then return home to host Central Georgia Tech in the Hangar at 3 p.m. on Saturday, January 21st.  They will also play a make-up game with East Georgia in the hangar on Monday, January 23rd.

The NJCAA and GCAA number one ranked Lady Jets travel to Albany Technical College on Saturday, January 21st for a 2 p.m. game before traveling to Denmark, SC, to play Denmark College on Wednesday, January 25th at 4 p.m. They are on the road again on January 28th traveling to Swainsboro to face East Georgia. Tip-off is 1 p.m.