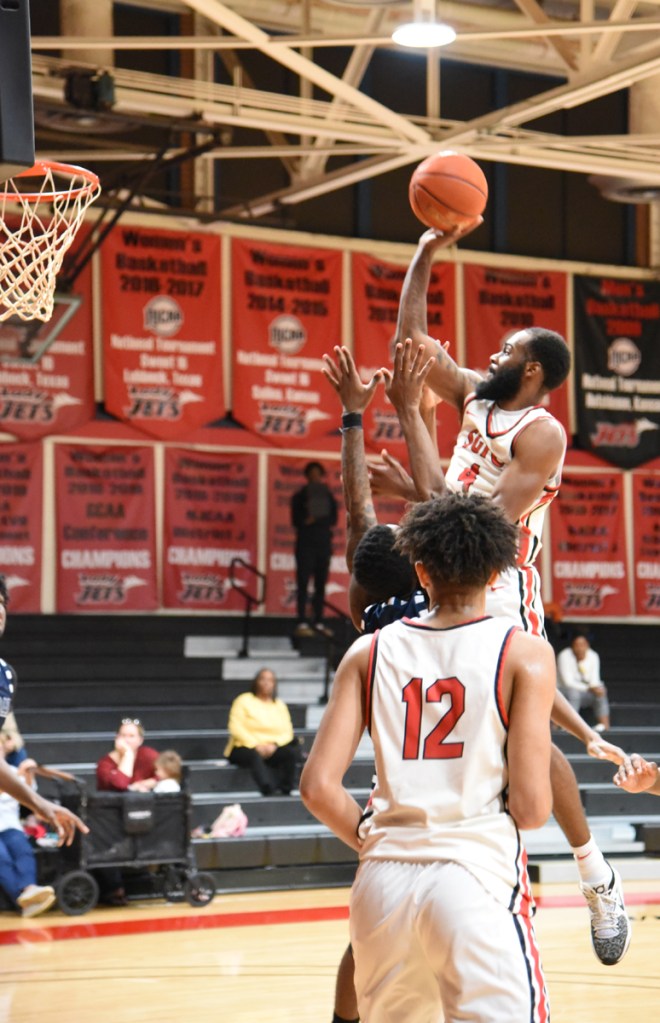 Aaron Pitts (#4) was the top scorer for the Jets with 18 points in the 80 – 70 loss to Central Georgia Tech. Photo by SGTC Athletics

AMERICUS – The South Georgia Technical College Jets (SGTC) just couldn’t get it all together Saturday and lost to Georgia Collegiate Athletic Association (GCAA) opponent Central Georgia Tech (CGT) by the score of 80 – 70 in the Hangar. The Jets dropped to 2 – 3 in the conference and 5 – 13 overall while CGT improves to 2 – 2 in the GCAA and 9 – 7 overall.

“We didn’t play well and we turned the ball over too many times,” said SGTC head coach Chris Ballauer after his team suffered their 13th loss this season. The Jets also sent the Titans to the free throw line 29 times and the Titans made 15 of those foul shots. In contrast, the Jets went five of eight from the foul line. CGT is now in fifth place in the conference and SGTC is in sixth.

Despite the almost identical stats, the Titans capitalized on turnovers and foul shots to secure their 80 – 70 victory. CGT scored 40 points in the first half and 40 in the second half. The Jets posted 37 and 33 and that left them with a 10-point deficit at the final buzzer.

Sophomore Aaron Pitts was the top scorer for the Jets with 18 points. He was the only starter in double digits. Freshman Deonte Williams came off the bench to score 11 points.  In contrast, CGTC had six players in double-figures, three starters and three off the bench.

Sophomore Kallin Fonseca and Nathan Wilson both had nine points for the Jets, Tim Loud and Ryan Djoussa both added eight and then Bryce Turner and Justin Evans had four and three points respectively.

SGTC will travel to Georgia Highlands College in Rome on Saturday, January 28th for a 3 p.m. tip off before returning home for a double-header with the Lady Jets on Wednesday, February 1st. The Lady Jets will open the night at 5:30 p.m. against Central Georgia Tech and the men will follow with a match-up against Andrew College at 7:30 p.m.