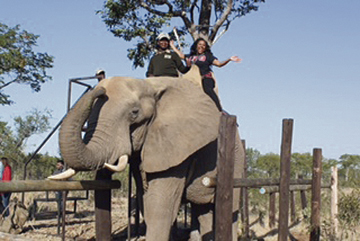 Brianna Watts had the opportunity to take a ride on an elephant during her study abroad trip to South Africa.

AMERICUS — Brianna Watts, 22, of Leslie graduated in May from the University of Georgia (UGA) with a degree in digital and broadcast journalism. In a couple of weeks, she will be moving to Atlanta for an internship with the Atlanta Journal-Constitution. The young woman participated in a UGA study abroad program in Africa prior to graduation to fulfill requirements for her minor in sociology. She agreed to talk about her experiences there.
First the group of 26 students went to Stellenbosch, South Africa. Watts said they attended classes Monday through Thursday mornings, learning about South African society and politics.
“Some of the classes dealt with education, crime rates, household statistics and income. The political classes dealt with how South Africa as a whole was created,” she said. She learned about how the Afrikaners, the Dutch and the Germans influenced the country’s history. She also learned more about apartheid, Nelson Mandela and Desmond Tutu, and the similarities between South Africa and the United States.
From 2-4 p.m. each weekday, Watts and her colleagues tutored local school children in Kayamandi Township. She worked with students in grades six through eight, in geography and math.
“They had a snack and they always prayed before the snack,” she said. She didn’t need to teach them English because they already knew it alongside their native tongue, Xhosa. She said she met one student who spoke four languages.
“It was a great experience because my students really enjoyed learning about our culture and how different it really is from what they see on TV and reality shows,” she said.
Watts explained that Kayamandi is in the poorest part of the country, and that a lot of the people live in shacks. “They do have electricity but no central heating and air conditioning,” she said, adding that you would never know of their poverty because they were happy. “They are poor in some ways but wealthy in lots of others,” she said. “It makes you grateful for what you have and really making the best of it. They are comfortable with themselves and where they live.”
Watts said some of her students plan to go to college. “A lot have ambitions to be an engineer, a doctor or a nurse, but the retention rate for high school is low. After-school programs stress the importance of college.”
She commented on the school uniforms, consisting of a blazer and skirt or pants and a vest. And the boys wear ties. “They’re very, very nice but the students have to pay for them.”
When asked about the foods available in South Africa, Watts said they had a stipend for meals during the week, and on the weekends, they cooked for themselves or dined out. She admitted becoming sick the first week because she was trying so many different foods.
They took weekend trips during their month-long stay to attractions like Table Mountain, one of the seven wonders of the world; Robin Island, where Nelson Mandela was imprisoned; and Soweto, where they visited Mandela’s house. They also visited the Apartheid Museum in Johannesburg.
Of Stellenbosch University, Watts found it much like the UGA campus.
“The campus was beautiful,” she said. “It looks like Athens. The town has malls, shopping centers and lots of bars, like Athens. The atmosphere is not really that different.” She said it was winter in South Africa when she was there and there is a six-hour time difference than her home in Leslie, Georgia, U.S.A. She admitted that she had to call her mother, Berniece Watts, frequently, to assure her of her safety and well-being.
She was so impressed with the country and its people that she hopes to go back some day to visit.
“The experience in South Africa was very fulfilling,” she said. “But I want to visit on a personal trip, to spend time more time amongst the locals and get a sense of how they live, to learn more about race relations, the labor system, to just talk to people. I would like to go as a journalist and see life from their perspective.”
Watts found Zimbabwe and Botswana more rural than Stellenbosch, but she was glad to have the opportunity to visit those areas as well.
“That’s where the fun stuff happened,” she said of Zimbabwe and Botswana.” She rode an elephant, zip-lined over Victoria Falls (”I was terrified,” she said.); went on two safaris where she saw indigenous animals such as leopards, elephants, giraffes, baboons and zebras in a national park. She the animals seemed unimpressed with the humans in the vehicles but one elephant came right up to the truck and stuck its trunk inside. “It got really close,” she said. “I had to move over.”
Watts said she also had the opportunity to go on a lion walk and actually pet six-month-old lion cubs. “They were called cubs, but they were still big,” she said. “They were in the field, in their habitat.” She also petted a cheetah.
As a whole, Watts was very impressed with her experience in South Africa.
“It was an amazing experience,” she said. “I can’t take it for granted. It’s hard to put into words how great an experience it was. I had my expectations, but it exceeded everything I had expected — the people, the food, the weather.”

Brianna Watts mugs for the camera with some of the students she tutored in Stellenboche, South Africa.