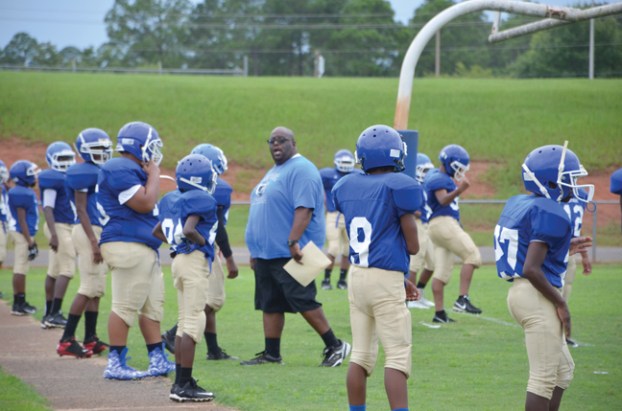 Submitted by Sumter County Schools: Rodney Shelton practices with the Panthers’ middle school team during the 2015 season in Americus. Shelton has been teaching and coaching middle school students through his entire teaching career.

Profiles: A teacher and coach committed to those who need him

AMERICUS – Last year’s Teacher of the Year in the Sumter County Schools, Rodney Shelton, has a unique passion for middle school students.
“The middle school kids need to understand things that they don’t know they need to understand,” said Mr. Shelton. “People know what they want when they come into a store or a restaurant. But they don’t know what they want when they come into school. As a teacher of a middle school student, you have to create the ‘want.’”
He has been creating the want on the football and baseball fields as well, guiding his middle school teams to multiple conference championships in football and one in baseball.
“I try to get the players to understand that to be successful as a student or as a student/athlete, you must dedicate the time and effort,” he said. “Being focused is also a very important trait for success in the classroom and on the field.”
With his success on the gridiron. Shelton has had the opportunity to move up. His heart, however, remains with the students he believes need him the most.
“I have been accosted by the community a thousand times to move to the high school in various sports, but it has never been something that I thought was a good move for me. And I was always confident in the coaches at the high school at the time,” said Mr. Shelton.
“I began my career teaching and coaching at the middle school level and I enjoy the children at that age,” he continued. “Many of them are new to the game and their skills are quite raw. I find joy in having the opportunity to teach the game to them. You see a great deal of growth as they begin their first opportunity to play the game on through the rest of the season.”