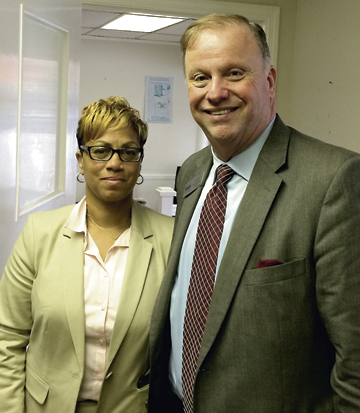 AMERICUS — Sid Chapman, president of the Georgia Association of Educators (GAE), visited the Americus Times-Recorder recently as he traveled around the state. He and Velesa Henton, UniServe director of GAE, voice their concerns about some of the recommendations coming from the Education Reform Commission,
“We continue to have strong concerns about actual practicing teachers not being at the ERC table to provide frontline input into these public education reforms that will reverberate for many generations of Georgia’s students to come,” said Chapman. The entire process has led to increased low morale among teachers and many are voicing to me that they want to retire as soon possible or leave the profession altogether. Proposed changes such as those on teacher compensation and eliminating the state salary schedule will make the morale even worse.”
Recommendations that Chapman has concerns over are included the following.
• The new funding formula is a back-pack funding model that will be based on students and their characteristics (e.g., gifted, low income, special needs, etc.) along with other criteria. Based on GAE’s research, no other state has tried this approach to date.
“It is yet another unproven experiment on our students,” Chapman said.
• Eliminating the state salary schedule and replacing it with local school district compensation models. GAE has major concerns with this recommendation. See the models at http://d31hzlhk6di2h5.cloudfront.net/20151120/41/a7/03/64/348f520404f8949decc9fa3c/GAE_Teacher_Compensation_Analysis.pdf
However, Chapman says there were some recommendations made that GAE supports including the following.
• Adding an additional $209 million to their recommended funding formula if funds are available. This new recommendation would be added to the $258 million already proposed resulting in a potential total of $467 million over today’s funding.
“Keep in mind, while these new funds would be helpful, the school systems would still be underfunded using the current QBE formula,” Chapman said.
• Increasing funding for Pre-K by $50 million using lottery funds. Proposals also include increasing pay and methods to increase the quality of Pre-K programs.
• Working to align teachers’ salaries to meet or exceed the national average for teacher pay.
• Providing state level funding program to compensate teachers who supervise  teacher interns.
• Modifying the implementation of Teacher Keys Effectiveness System (TKES) to allow fewer required classroom observations for effective teachers after a baseline of effectiveness has been established.
• Providing grants to support districts in developing strong teacher induction programs.
• Keeping as a top priority the preservation of teacher planning time.
“To monitor implementation, the climate survey for LKES should be amended to include a question related to how well principals protect teacher planning time,” said Chapman.
• Returning to a “normal” curricular adoption cycle, and maintaining a high bar before implementing major changes outside a six-year cycle.
• Encouraging regional and state-wide collaboration to make SLO (student learning objectives) assessments more consistent within the state.
• Supporting full implementation of the teacher career ladder and participation in the top levels of the Tiered Certification model.
• Investigating the benefit of re-instituting the service cancellable loan programs for students graduating from a University System of Georgia (USG) teacher education program.
• Reimbursing the costs of the required GACE exams and edTPA which pre-service teachers incur while enrolled in a teacher preparation program of the University System of Georgia.
“While there was unanimous consent from ERC members on most of the recommendations, there were a number of commission members that dissented and voted against a number of recommendations to offer more financial and other support to charter schools,” said Chapman. “Two of the proposals for tax credits for private schools and voucher-like saving accounts for parents were voted down by the commission which was a great victory for public education.  We would like to thank the bipartisan legislators and other commission members that stood together to vote these proposals down. However, GAE has major concerns about most of the charter school recommendations that did pass.”

AMERICUS — The Thanksgiving holiday is typically one of the busiest travel periods of the year. The holiday travel period... read more