Schley slides to 12-2 with wins over Marion, Brookstone, and FPD 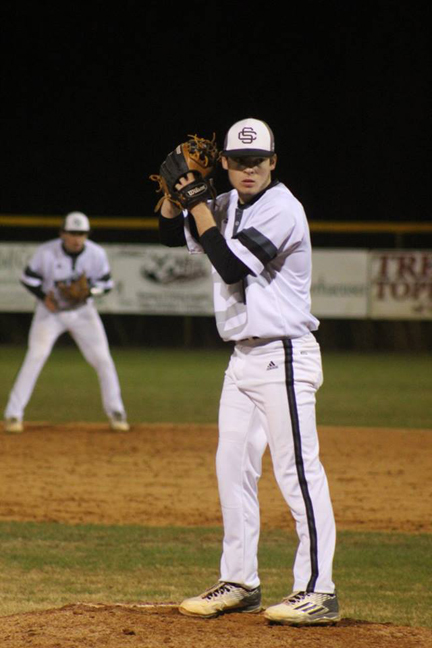 Submitted by Chuck Cheek: Schley’s Blake Howell does work on the mound for the Wildcats during a mid-season match in early March. Howell gained five strike outs during the Wildcats’ March 9 contest against Lee County.

The Schley County Wildcats baseball team has been busy over the past several days, earning a series of solid victories after taking the team’s second loss of the season on March 9.
That afternoon, the ‘Cats traveled to Leesburg to take on the Lee County Trojans, an undefeated Class-AAAAAA perennial power.
The Wildcats pulled ahead early in the contest, but succumbed to a late rally in extra innings to suffer a 5-4 loss.
Schley’s boys returned to the diamond in Buena Vista on March 11 to deal a 12-3 blow to region 4-A foes, the Marion County Bulldogs, before returning to their home field to battle the Brookstone Cougars. The Wildcats earned a 5-1 victory in that contest.
To cap off the action, the Wildcats returned to the diamond on March 17 to deal a 9-1 thrashing to First Presbyterian Day School (FPD) in Macon.
With the series of wins and the solo defeat, Schley improves to 12-2 on the season and 4-0 in region play.

Schley’s batters rocketed off to a great start in the Lee County match, loading the bases with a trio of walks before Brett Usry took the plate and belted a single that pushed two runners home.
When the Wildcats ceded the dugout, Blake Howell took the mound and was dominant, throwing for six innings while allowing just two hits, one walk. Howell struck out five batters.
Schley led 2-1 going into the bottom of the sixth inning. With runners on second and third, Usry made a nice defensive play, seemingly throwing out the batter at first base to wrap up the inning. After both teams had reached the dugouts and were taking their positions for the next frame, the umpires overturned the call at first base, allowing the Trojans another chance to score the tying run. Lee County did just that, plating one more runner to equalize the gap at 2-2 before relinquishing the plate.
Schley’s Chase Patrick came in to pitch the bottom of the seventh and, after the bases were loaded with no outs, retired three consecutive batters with two strikeouts and a caught pop-up to send the match into extra innings.
After an unproductive eighth frame, Schley took a 4-2 lead in the top of the ninth.
Josh Hutchens reached on a fielder’s choice and quickly stole second to get into scoring position with one out. After Michael Leeder drew a walk, Usry singled to left field to plate Hutchens and put the ‘Cats ahead 3-2. Clint Sellars then followed with an RBI single of his own to extend the gap to 4-2.
The Wildcats’ advantage was short lived, however, as Lee County scored three in the bottom of the inning on a pair of infield singles, an error, and a walk to cinch the victory.
On the team’s performance against such a formidable opponent, Wildcat head coach, Chuck Cheek, stated, “Our guys played their tails off. I really don’t think there was much else we could have done. Lee’s pitchers were solid on the mound and they made some really nice plays, defensively. Their offense is stacked. The performances that Blake [Howell], Chase [Patrick], and Brett [Usry] gave us were exceptional. We won’t see an offense like that for the rest of the year. [Howell] absolutely dominated while he was in here. He didn’t want to come out, but it’s a long season and we want to make sure he’s ready for the games that really count. Hopefully, we can draw on that game to show that we can play with and beat anyone when we play like we are capable of playing.”
The Wildcats out-hit the Trojans 8-5 in the match.
Following the defeat, the ‘Cats licked their wounds and began preparing for their next tilt against region foes, the Marion County Bulldogs.
Determined to remind their opponents that their team is a force to be reckoned with, the Wildcats pushed for an explosive eight-run fourth inning that put the game out of reach early and the Wildcats never looked back, finishing with a 12-5 victory.
Patrick opened play on the mound for the ‘Cats, pitching the initial four innings. Patrick struck out four batters, walked two, and gave up two hits. Marion’s trio of runs were all unearned. Leeder pitched the final three innings, allowing one hit, four walks, and striking out one batter. He allowed no runs.
The Cats big fourth-inning scoring spree came by way of an RBI double by Usry, an RBI single by Sellars, an RBI double by Will Barry, a two-run single by Wade Law, and a two-run single by Michael Leeder. The Wildcats also took advantage of three Marion errors in the frame.
“That was an ugly game. Neither team played very well,” Cheek said after the win. “I think the first seven total runs of the game were all unearned. We finally turned the corner in the fourth inning and were able to capitalize on some of their mistakes with some big hits of our own. We didn’t do much after the fourth inning. We can’t go in to cruise control, and it really looked like we did there for a couple of innings. We have to battle every inning to get to where we want to be as a team.”
“There were obviously some bright spots,” he continued. “ We had four different guys (Usry, Barry, Patrick, and Leeder) with multiple hit games. Wade Law had a nice two-RBI single in one of his first games as a starter. Chase [Patrick] and Michael [Leeder] missed a lot of bats and neither was hit hard, but we have to do a better job with our command in the zone.”
The Wildcats carried this momentum into their next contest against FPD, scoring enough runs in a third-inning rally to cinch the victory. The Vikings pushed a runner across the plate in the fourth, firing up the visiting Wildcats, who responded with a four-run fifth inning to ensure the win.
The Wildcats began a week-long away series on March 18, traveling to Butler to take on Taylor County. The results of this contest were not available at press time. The tour will include matches against St. Anne-Pacelli, Hawkinsville, and Miller County. The Wildcats return home on March 28 to face Baconton Charter. The match will be held at Georgia Southwestern State University in Americus.