A wide view of the drugs and weapons confiscated on Lexington Circle earlier this week.

AMERICUS — Two Hispanic men living in Americus were arrested earlier this week on guns and drugs charges.
Cpl. Chad Ciani of the Sumter County Sheriff’s Office, told the Times-Recorder that the two men had garnered the attention of ICE (U.S. Immigration and Customs Enforcement), and when ICE made a traffic stop on the vehicle the two men were in, local authorities were notified.
At 9:30 a.m. Wednesday, Ciani, along with Sumter County Sheriff’s Sgt. Kyle Selph, assisted ICE with apprehending the suspects. 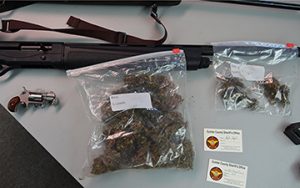 A closer look at the marijuana confiscated.

After finding a gun in the possession of Bartola Romero-Adame, 43, authorities searched the man’s residence at 201-A Lexington Circle, Americus, which is also the residence of Marcial Arcos-Catalan, 33.
Authorities found two pistols, two rifles and two shotguns in the residence, along with 63.6 grams of marijuana (with an estimated street value of between $500-$1,000), and 1.1 kilos of liquid marijuana tincture. Ciani said one of the firearms they confiscated had been stolen in a residential burglary in August in Americus.
Romero-Adame is charged with felony possession of a stolen firearm, while Arcos-Catalan is charged with felony possession of marijuana, and possession of a firearm during the commission of a felony. Both men are housed at the Sumter County Jail. 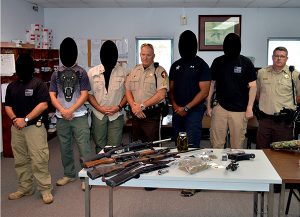 The only two involved in the arrests who can be identified are Cpl. Chad Ciani, middle, and Sgt. Kyle Selph, at right, both with the Sumter County Sheriff’s Office.

Ciani said the two men are illegal aliens, and if convicted of these crimes, will be taken to the ICE Detention Center near Lumpkin in Stewart County, and later deported back to Mexico. The deputy said that additional charges are pending against the two as the investigation continues.