Georgia, Newcastle upon Tyne; a special relationship for the ages 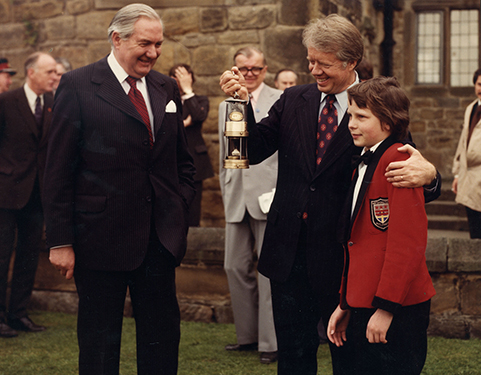 “Haway the Lads!”
2017 marks an important milestone in the special relationship between Georgia and Newcastle upon Tyne in the northeast of England. The year marks the 40th anniversary of President Jimmy Carter’s visit to Newcastle; the 40th anniversary of the twinning of the cities of Atlanta and Newcastle; and later in the year, the 50th anniversary of Newcastle University’s conferment of an honorary doctorate degree on Dr. Martin Luther King Jr.
The special relationship between our great nations transcends intergovernmental relations reaching the hearts of Americans and Brits alike. On his 1977 visit, President Carter thanked the people of Newcastle for the wonderful welcome accorded him saying, “we share a great future together.” 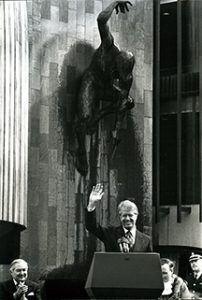 President Carter offering remarks in front of the God of the Tyne statute outside Newcastle Civic Center.

As we celebrate the anniversary of President Carter’s Newcastle visit, we are reminded of the lasting connections that grew out of his vision of a more connected transatlantic partnership. Building on this and many other connections, the cities of Atlanta and Newcastle signed a sister-city agreement which continues to inspire collaboration across diverse disciplines.
The legacy of President Carter’s visit lives on just like that Tulip tree he planted at Washington Old Hall, the ancestral home of America’s first president. There exist robust cultural, economic and academic ties between Georgia and Newcastle. Companies like Sage, founded in Newcastle now have their American HQ in Atlanta. Others like Meggitt Training Systems in Suwanee and JCB Inc. in Savannah, maintain significant trade and investment operations in Atlanta and Newcastle. 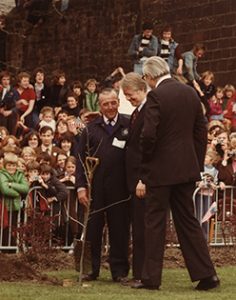 In the field of academia, Georgia students have received the prestigious Marshall Scholarship for advanced degrees at renowned UK universities and colleges. Since its inception in 1954, more than 51 students from Georgia universities have become Marshall Scholars and gone on to study in the UK.
This list includes 2017 scholars, Kantor Noam and Emilia Truluck from Emory who are presently pursuing advanced degrees at University of Oxford. In collegiate sports, Georgia State University men’s football program proudly features nine Brits as part of the 25-man Panther football squad.
President Carter and his family continue to build on this legacy and retain an interest and support for this transatlantic relationship. The “friendship force,” a home-stay exchange between “Geordies” and “Georgians”, has seen President Carter and his family return to Newcastle where they stayed with a local family.
The Carter Center has a proud tradition of working with UK government institutions and NGOs to find solutions to some of the most pressing global concerns including disease eradication and economic empowerment. In his address to the UK House of Lords on Feb. 3, 2016, President Carter highlighted the work of the Carter Center towards Guinea Worm eradication.
As Atlanta and Newcastle prepare to celebrate these venerable milestones, we salute those who pioneered the connections we enjoy today.
“Haway the Lads!”
As the Geordie battle cry goes, it beckons an important milestone for Atlanta, Georgia and sister-city, Newcastle upon Tyne.

About the British Consulate General Atlanta
The British Consulate General in Atlanta represents the United Kingdom’s government in Alabama, Georgia, Mississippi, North Carolina, South Carolina and Tennessee. Its services include dealing with a wide range of political, commercial, security and economic questions of interest to the U.K. and South-eastern United States. It also provides consular assistance to British nationals in the region.
— British Consul General for the Southeast U.S., Jeremy Pilmore-Bedford