The Americus-Sumter girls’ tennis team was able to get a 3-2 win at Pelham. Photo by Ken Gustafson

PELHAM – The Americus-Sumter girls and boys’ tennis teams had mixed results Friday, March 23, at Pelham High School. The ASH girls were able to win 3-2, but the boys lost their match to the Yellow Jackets 3-2.

In girls’ action, the Lady Panthers’ number one singles player, Hannah Martinez, lost to Breana Kirby 6-8. However, Jovan Sykes won in a forfeit over Ashley Maxwell since Maxwell was unable to play due to a family emergency. Kimberly Worthy defeated JaShauna Harvey 8-1, giving ASH a 2-1 lead.

In doubles action, the ASH duo of Kirby Perry and Taylor Garcia defeated Pelham’s duo of Katie Smith and Kristen Palmer 8-3. In the final doubles match, Elena Pagan and Trenidee Sanford lost to the doubles team of Lauren Harrell and Kelsey Bechman 6-8. However, the Lady Panthers were able to come out on top 3-2. 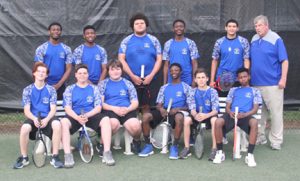 The Americus-Sumter boys’ tennis team fought extremely hard against the Yellow Jackets, but lost their match 3-2.
Photo by Ken Gustafson

Unfortunately for the ASH boys, they weren’t able to duplicate the girls’ success, though they tried extremely hard. Aaron John-Ndaayezwi fell to Grayson Shiver 5-8. However, Braxton Cross was able to win a hard-fought match against Pelham’s Michael Boyd 9-7, tying the overall score at 1-1.

The Panthers’ Zach Johnson defeated Jack Cone 8-2, and it seemed as if the boys team might win their team match as well. However, the ASH doubles team of Keldrick Flemming and Chandler Reddix had to forfeit their match against the Pelham duo of Shyleak Stanley and Jarvis Atkins. That proved to be the difference in the overall score, just as Pelham’s forfeit in the girls’ match proved to be crucial.

In the final boys’ doubles match, the ASH team of Aaron Lewis and Chris Wooden fought extremely hard and gave a good account of themselves. However, they were unable to come away with a win against the Yellow Jackets’ duo of D.J. Johnson and DeVontay Richardson, losing 6-8.