Timothy Perry is 140 pounds lighter now than he was a year ago.

AMERICUS — Timothy Perry said he was just tired of trying and still failing. That was in 2015, when he topped out at 400 pounds. By May 2018, he had lost 140 pounds in one year.
Perry was working with the alternative school program in 2016, in the Dougherty County school system at the time, commuting daily, and grabbing fast food. “I was experiencing dizzy spells; my eyes were red,” he said. The school nurse was called in and she tested his blood sugar. It read 360 (90 to 110 is average). He said he also had places underneath his arms where the skin had broken, due to his weight.
He was diagnosed with Type 2 diabetes when he weighed 395 pounds. He knew he was in trouble because he had experienced problems with breathing and sleeping. He admits that his eating habits — sugars and starches — and lack of exercise were the causes, and he gained a lot of weight around his mid-section. He said he was consuming between 6,000 and 7,000 calories daily at that time. “I was addicted to food like a drug,” he said. He said he ate from the time he awakened each day until bedtime, and even middle-of-the-night eating. 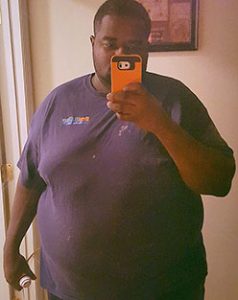 Timothy Perry said he weighed 400 pounds at his heaviest.