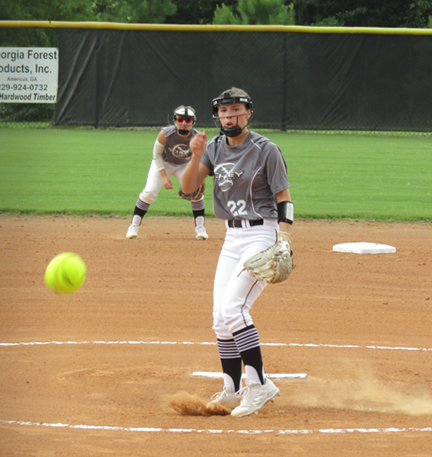 ELLAVILLE – It was supposed to be the beginning of an exciting year for the Schley County Lady Wildcats softball team. They were taking on Miller County in their season opener on Monday, August 6, at Schley County High School. However, with two out and two on in the top of the first for Miller County, a lightning strike was seen and the umpires halted play for what was supposed to be just a 30-minute delay. According to Georgia High School Association (GHSA) rules, if a lightning strike takes place during a game, the game is to be halted for 30 minutes. Unfortunately for both teams, there was another lightning strike, delaying the game even longer. It began to rain and continued to rain steadily for the next two hours. The umpires waited as long as they were allowed to, hoping that the bad weather would move out of the area. Unfortunately, it did not. According to GHSA rules, the longest amount of time allowed for a delay is two hours. The umpires, coaches, teams and fans waited the maximum two hours, but there was no sign that the bad weather would move on. Therefore, the game was postponed.

Play was halted at around 5:07 p.m., seven minutes into the game. The delay lasted for two hours and was finally postponed a few minutes after 7 p.m.

Saige Whaley was the starting pitcher for Schley County. She got Lacey Simmons, the lead-off batter, to line out to shortstop Carmen Phillips. Then Miller County’s Taylor Cason flew out to center fielder Alexis Bradshaw. Whaley walked Myla Branch. That was followed by a single by Jahla Kyles. The Lady Pirates had two on with two out when the lightning strike came and the lengthy delay began.

The Lady Wildcats will play their first region game at Crawford County in Roberta on Tuesday, August 7, at 6 p.m. Their next home game will be another region game on Thursday, August 9, against Brookstone. First pitch is scheduled at 5 p.m.