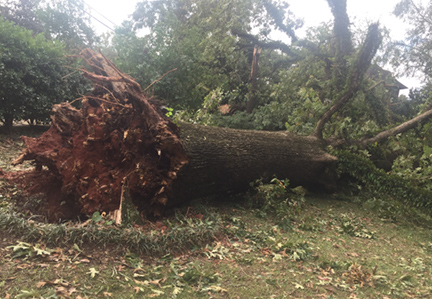 Hurricane Michael uprooted and toppled a large tree in the front yard of Anthony and Barbara Destefano on South Lee Street in Americus. Photo by Ken Gustafson

Residents of Americus recount their experience of Hurricane Michael

AMERICUS – It was a day people in Americus and Sumter County will never forget, but will want to forget. On Wednesday, October 10, 2018, Hurricane Michael, after wreaking unparalleled destruction on the Florida Panhandle, barreled its way into Sumter County.

Michael brought with it 74-100 mph winds and about eight inches of rain. The storm toppled several large trees and snapped power lines, causing 90 percent of Sumter County residents to be without power. Many are still in the dark.

According to Sumter County Emergency Management Director Nigel Poole, there were no fatalities or serious injuries as a result of the storm. However, many street lights throughout Americus are off-line. Businesses, schools and many restaurants were closed on Thursday, October 11, the day following the storm. At the Burger King, located at 922 East Lamar Street, there was a drive-through line of cars that began at the entrance into the restaurant’s parking lot at around 11:30 a.m. At the Subway, located at 1039 East Forsyth Street, there was a long line of people inside ordering food at around 2 p.m. that afternoon.  This was the seen at the few restaurants that were opened on Thursday, October 11. 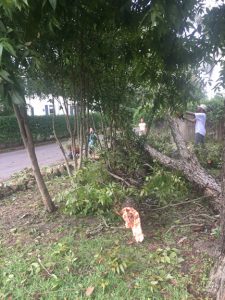 South Lee Street Resident Rod Gunn using his chain saw to clear the debris of the tree that fell in his front yard.
Photo by Ken Gustafson

While the downtown area remained pretty much unscathed, that wasn’t the case for residents living along South Lee Street. Tree branches, leaves and downed power lines were all over the road and the sidewalks on both sides of the road. Several residents living along that stretch of Lee Street were faced with the daunting task of removing large trees that were toppled in their front and back yards.

Rod and Lydia Gunn live along South Lee Street. One of their trees fell in their front yard during the storm. Rod Gunn, like other residents in that area, was using his chain saw to remove the remains of the tree. Like most of the residents of Americus and Sumter County, the Gunns lost power Wednesday night. “We lost power at about 8:30 p.m.,” Lydia Gunn said. “The tree hit the house at about 8:50 p.m., I guess. We just hunkered down after that. There was really nothing we could do.” 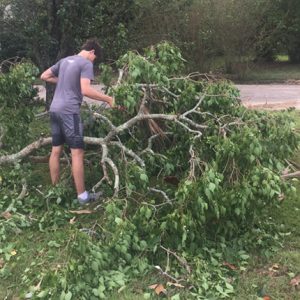 The Gunns’ next-door neighbors, Anthony and Barbara Destefano, had a huge tree that was totally uprooted and knocked down in their front yard. “We didn’t find out until this morning when we got up that the tree had fallen. We had no idea,” Anthony Destefano said.

South Lee Street resident Chris Usrey using his chain saw to take apart and clear the downed tree in his back yard.
Photo by Ken Gustafson

Chris Usrey’s house is on the same side of the street as those of the Gunns and Destefanos. A large tree in his back yard was knocked over during the storm. “We didn’t have any home damage other than just the trees in the yard, so we were really, really lucky,” Usrey said. “We lost power at about 9 p.m. A transformer across the road blew. In terms of damage, it really hasn’t been that bad.” Usrey went on to say that they had more damage during the tornado that hit Americus in 2007, but that it could have been a lot worse this time around. “With the tornado, we heard it come south of us and it got really windy for a second. Then, all of a sudden, it was gone. With this thing, at about 9 p.m., the winds really started picking up and they stayed up. You could just hear stuff breaking all the way up to about 11 p.m. or midnight. We got lucky. It’s bad, but it could have been a lot worse.”

Other residents living along South Lee Street had trees fall in their yard. A tree fell in the front yard of County Commissioner Mark Waddell’s home. His son, 16-year-old Gage Waddell, was out doing what he could to try to clear the tree out of the yard.

A tree fell next to the Greene & Greene Law Firm located at 702 South Lee Street in Americus.
Photo by Ken Gustafson

Residents in other areas also had a frightening experience as the storm ripped through Americus. Daryl Goober, an employee at WAL-MART, recounted his experience to the Americus Times-Recorder. “At around 11 p.m., it got so bad in my apartment that my windows were shaking,” Goober said. “I though the whole apartment was about to come apart. My whole apartment started trembling. I went down stairs and slept on the floor.” 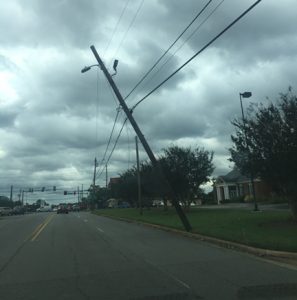 A telephone pole on South Tripp street was pulled into a tilted position as a result of Hurricane Michael.
Photo by Ken Gustafson

Some residents, such as Carolyn Cladd and her family, weren’t able to stay in their homes during the storm. They had to stay in shelters provided by the county. “We live in a mobile home, so we had to leave the mobile home and go to the Tornado Safe Room on Highway 19 south,” Cladd said. “That’s where we stayed till this morning. It was wonderful…really nice.”

While there is much work to do as far as cleaning up and while there are still some inconveniences, such as lack of power, it is fortunate that there were no serious injuries or deaths. The eye of the hurricane made its way along the Crisp/Sumter County line. Fortunately, the storm did not linger, but moved out quickly. Things will return to normal.

AMERICUS – For those who need ice, Food Lion has plenty of ice. As far as WAL-MART is concerned, at... read more