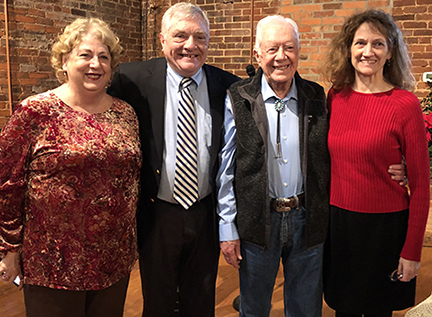 PLAINS — More than 40 men, including six “Living Legends,” were honored by the Plains Historical Preservation Trust at its meeting on Dec. 2 at the Plains Community Center. The “Men of Plains” program was a follow-up to the “Women of Plains” who were recognized by the Trust in 2017.
Those recognized included the founder of the town of Plains, in addition to doctors, pharmacists, farmers, educators, mayors, ministers, and many others. Among the large crowd of guests were at least two descendants of M.L. Hudson, the town’s founder. The elder Hudson had a rich pedigree in Plains annals. He was the town’s first postmaster, first railroad agent, and built the first house in Plains. His descendants who were present were Milton Leander Hudson of Tyler, Texas, and Lucy Hudson Stembridge of Forest Park, Ga.
The six Living Legends who were recognized included President Jimmy Carter, as well as the Rev. C.G. Haugabook; Bob Moss; C.L. Walters III; Jimmy Bagwell, Ph.D.; and Mayor L.E. “Boze” Godwin III.
Carter was cited as a former governor, U.S. president, Nobel Peace Prize winner, U.S. Naval Academy graduate, Sunday school teacher at Maranatha Baptist Church, and dedicated resident who has worked tirelessly to preserve the history of the community. He was honored for his good works around the world through The Carter Center in Atlanta.
Haugabook was cited as a longtime Methodist minister, and being instrumental in publishing the “History of Plains, Georgia” book in 2003. He also served many years as editor of the Trust’s “Echo” newsletter. He and his wife Allene Timmerman Haugabook have lived in her childhood home in Plains for the past 31 years.
Moss was recognized as the former superintendent of the University of Georgia’s Southwest Georgia Branch Experiment Station. He is an Air Force veteran who earned a Bronze Star during the Korean War. The auditorium at the Experiment Station was named in his honor at his retirement. He and his wife have been members of Plains United Methodist Church for the past 56 years.
Walters, a Georgia Tech graduate, has worked as a fire protection engineer, officer in charge of the Plains Post Office, rural mail carrier, tax preparer, city councilman, and fire chief during his career. He notably purchased his father’s grocery store on Main Street in 1971. He has served on administrative boards and many offices in Plains United Methodist Church, the Southland Academy board of trustees, SAM Shortline Authority Board, and Plains Lions Club.
Bagwell is a longtime professor at Georgia Southwestern State University. He was recognized as a published author, Plains historian, former mayor, and City Council member. He also was instrumental in writing the “History of Plains, Georgia” book.
Godwin was cited for carrying on the tradition of both his father and grandfather as beloved town pharmacists and for his “heart of gold.” A University of Georgia graduate, he is the current mayor of Plains, having served two separate time periods, and for a total of more than 35 years.
All of the Living Legends have been board members or strong supporters of the Plains Historical Preservation Trust since its incorporation 41 years ago.
In addition to the Living Legends, the others recognized all played key roles in the town’s early beginnings and successes during the past 130-plus years.
They included Dr. J. Frank Cato, John A. McDonald, the Rev. Augustus Caesar Wellons, Edwin Timmerman, Dr. Burr Thomas Wise, William H. Spann, R.S. Oliver, John Bartow Clark, George W. Montgomery Jr., Bishop William Decker Johnson, John William Murray, John Graham, Ross Dean, Almer Clyde Murray, Dr. Joseph Colquitt Logan, Oscar A. Williams Sr., Frank F. Timmerman, Lynton Earl Godwin Sr., James Earl Carter Sr., Wilburn Edgar Smith, Joseph A. Bacon, Young Thomas Sheffield Jr., P.J. Wise Sr., Ernest Conley Turner, George Franklin Williams Sr., Hugh Alton Carter, George A. Harper, Edwin Cody Timmerman, Millard Simmons, Ralph W. McDonald, Milton A. Raven Sr., the Rev. Dr. Daniel G. Ariail Sr., William Raven, and Jack Clark.
Families of many of these men also were in attendance.
For information on the Historical Trust, info on any of its works, or to join, call 229-938-4839 or 229-410-5023.