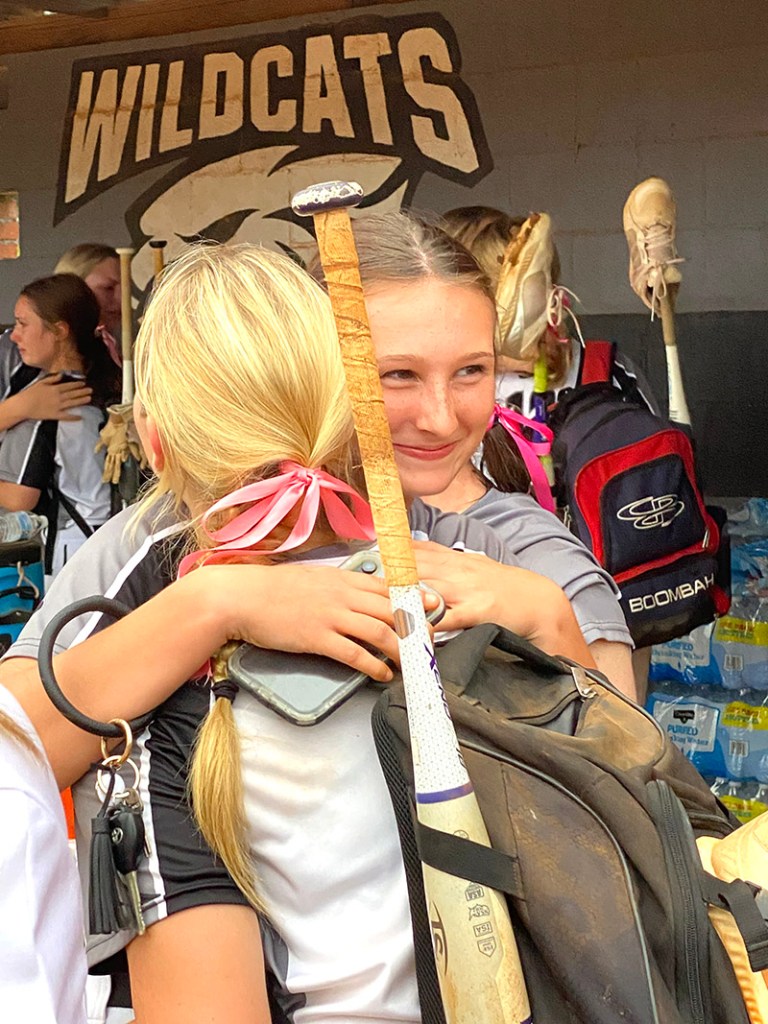 ELLAVILLE – It has been said that sports is a microcosm of life. In life, everyone has ups and downs. Human beings experience the heights of joy and elation, along with the lows of depression and despair. In sports, it has been called the “thrill of victory” and the “agony of defeat.” A week ago on Friday, October 23, the Schley County High School Softball Team (SCHS) swept Georgia Military College 2-1 and 4-1 and experienced the joy of moving on to the Elite Eight of the GHSA Class A-Public State Playoffs. However, four days later, the Lady Wildcats experienced the painful finality of their season coming to an end. On Tuesday, October 27, in front of a large crowd of cheering supporters at Schley County High School, Bryan County (BCHS) eliminated the Lady Wildcats from the playoffs. The Lady Redskins won both games by scores of 7-1 and 5-4 and cut short the Lady Wildcats’ memorable run towards a state title.

For the six seniors on the SCHS squad; Jade Sellars, Perri DeVane, JoDee Howard, Ashlyn Childs, Darden Campbell and Rene Rix, it was their last game in a Lady Wildcat uniform. 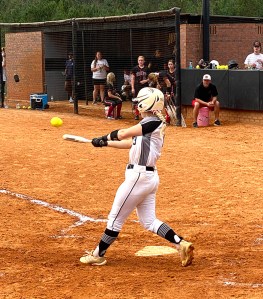 Schley County second baseman Jade Sellars delivered a three-run double in the top of the sixth inning of Game 2 to tie the game at 4-4.
Photo by Ken Gustafson

While SCHS Head Coach Jody Sellars expected his club to win the region championship, which they did, in his mind, the Lady Wildcats exceeded expectations in other areas.

“Starting out the year, we weren’t very good. Midway through the year, we were still up and down,” said Sellars. “I just got done telling the girls that I had expectations to win region. It looked shaky to begin with. We ended up coming through winning the region. I had realistic expectations to win 15 ball games. We won 16 ball games, so they exceeded expectations there. I don’t know that I had 100 percent confidence that we would make it to the Elite Eight (state quarterfinals). It’s a testament to the girls working and battling that they got there and had a legitimate chance to go to the Final Four for the first time in close to 10 years. I can’t say enough about the girls’ determination and fight throughout the season and within ball games. I’m extremely proud of our seniors. I’m losing a good group, six girls that all played a key role to some extent. They all showed up every day and worked hard. I just got done telling them how appreciative of them I was and how I’ve been for the past four years because they had really worked and set the tone for these younger players and showed us how we do things on a daily basis. Overall, I’m really proud of my team. Like I said, We battled and that’s all you can ask. I talked to them about winning and losing the right way. If you put it all out there and compete and you just get beat by a better team on a certain day, I can handle that. That’s what it was today. We made a few key mistakes here and there, but overall, we competed pitch to pitch and played pretty well,” continued Sellars. 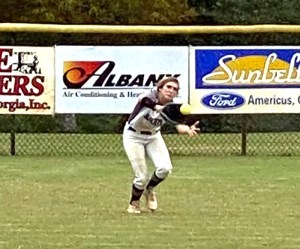 SCHS battled toe to toe with the Lady Redskins through much of Game 1. In the bottom of the first, the Lady Wildcats scored the game’s first run. Perri DeVane led off the inning with a double to left field and would later score on an RBI single from Zoe Molina.

SCHS had a chance to increase its lead when Landry Whaley and Berkley Goodin had back-to-back singles to load the bases with one out. However, BCHS starting pitcher Hayden Joyner was able to get out of the jam by striking out Rene Rix and Maddie Walker to end the inning.

In the top of the second, BCHS tied the game when Maegan Beck drove in Skylar Lee on an RBI single. 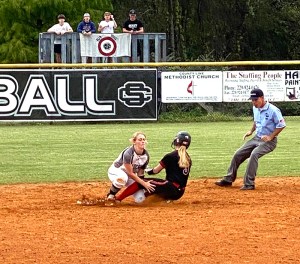 Jade Sellars is able to tag out a BCHS runner going into second base.
Photo by Ken Gustafson

Both teams went scoreless during the third and fourth innings, but the Lady Redskins were able to take a 2-1 lead in the top of the fifth on a sacrifice fly by Beckah Johnson.

However, the big blow to the Lady Wildcats came in the top of the sixth inning when BCHS loaded the bases as a result of two singles and an error by SCHS. With the bases loaded and nobody out, SCHS starting pitcher Ashlyn Childs tried desperately to get an out. However, Mackenzie Mobley scored on a passed ball and Childs walked Skylar Lee, allowing another run to score for BCHS. At that point, the Lady Wildcats found themselves trailing 3-1 with the bases still full of Lady Redskins and no outs. 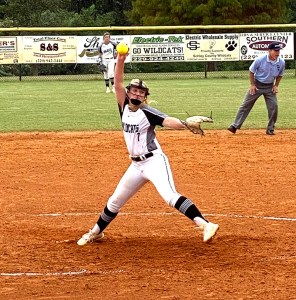 Schley County pitcher Lizzie Barineau came on in relief of starter Ashlyn Childs in Game 1. Barineau gave up one run on two hits, walked a batter and struck out one in relief work.
Photo by Ken Gustafson

BCHS got another run on a passed ball. Then Alisha Fabin blew the game open with a two-run double, making the score 6-1 in favor of BCHS.

Lizzie Barineau came on to pitch in relief of Childs and was able to retire the next three batters, but the damage had been done. Then in the top of the seventh, the Lady Redskins added another insurance run when Mobley belted a solo home run over the left field wall to finish off the 7-1 victory for BCHS in Game 1. 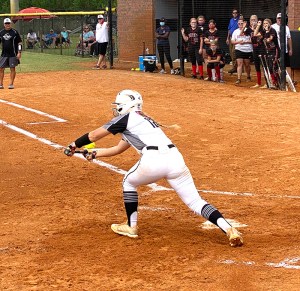 Joyner was able to strike out 11 Lady Wildcats and gave up just one run on five hits, while walking three.

Perri DeVane went 1 for 4 at the plate with a run scored, while Molina drove in the only RBI for the Lady Wildcats. Goodin, Rix and Whaley each went 1 for 3 in the game to round out the SCHS offense. 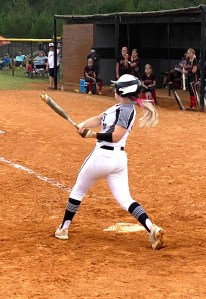 Schley County’s Rene Rix went 2 for 4 with a double, a single and a run scored against Bryan County in Game 2.
Photo by Ken Gustafson

Childs pitched the first five innings for the Lady Wildcats. She gave up six runs on eight hits, walked two batters and struck out two. Barineau came on in relief of Childs in the top of the sixth inning. She pithed the rest of the game and gave up one run on two hits, walked one batter and struck out one.

Mackenzie Bailey led the Lady Redskins’ offense by going 2 for 3 at the plate with a double and two RBIs and Mobley went 2 for 4 with a home run, two runs scored and an RBI.

Having lost Game 1, the Lady Wildcats found themselves on the brink of elimination and would have to find a way to win Game 2 to force a third and deciding Game 3. 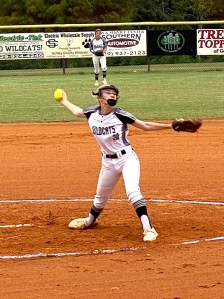 Things did not start well for SCHS in Game 2, as the Lady Redskins scored three runs in the bottom of the first inning to take a 3-0 lead. With one out, Johnson and Mobley got back-to-back singles off SCHS starting pitcher Makena Wurtz. Then Alisha Fabin cleared the bases with a three-run homer. The Lady Redskins were able to get two more runners on base, but Wurtz was able to retire the next two batters to prevent any further damage.

However, BCHS added another run in the bottom of the second inning when Mobley drove in Daxne Carrera on an RBI double. At that point, the Lady Wildcats found themselves in a hole, trailing 4-0 in Game 2 and already trailing 1-0 in the series. 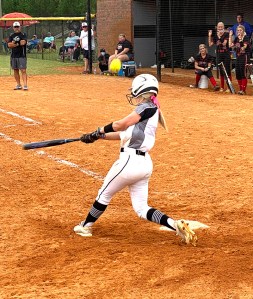 However, the Lady Wildcats found a way to claw their way back in it. In the top of the fourth, Rene Rix led off the inning with a single and advanced to second on an error by the BCHS center fielder. Maddie Walker then bunted into a fielder’s choice, but reached first safely, while advancing Rix to third. After Walker stole second base, Hannah Crawford hit a shallow fly ball towards center field, but the BCHS second baseman was unable to make the catch. That allowed Rix to score and it brought the Lady Wildcats to within three runs. 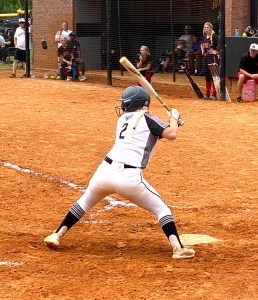 Schley County catcher Landry Whaley went 1 for 3 with a single against Bryan County in Game 1.
Photo by Ken Gustafson

However, in the bottom of the sixth, BCHS was able to regain the lead. With one out and a runner on second, Carrera singled to left field, advancing courtesy runner Amber Grey to third. Bekah Johnson then hit into a fielder’s choice, which allowed Grey to score the go-ahead run from third. That run would prove to be the game winner for the Lady Redskins, as Joyner was able to retire Goodin, Rix and Walker to end Game 2 and the Lady Wildcat’s season. 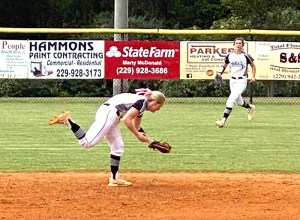 Wurtz went the whole way in the circle for SCHS. She gave up five runs on nine hits, walked two and struck out two.

Carrera, Mobley and Joyner had multiple-hit performances for the Lady Redskins and Alisha Fabin was 1 for 3 with the three-run homer in the first inning. 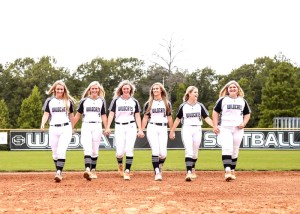 Having already gotten the win in Game 1, Hayden Joyner pitched all of Game 2 to win that one as well. She gave up four runs on seven hits, walked three and struck out three.

The Lady Wildcats end their season with a record of 16-12, while BCHS improves to 30-4 and continues on to the GHSA Class A-Public Final Four in Columbus on Saturday, October 31.