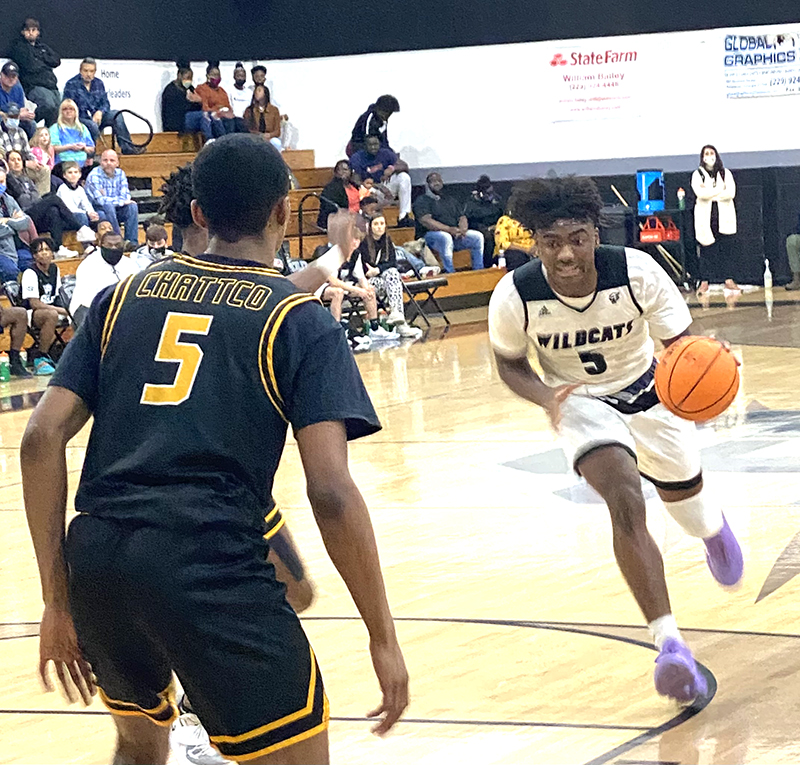 ELLAVILLE – After their 56-43 win over Greenville the night before, the Schley County Wildcat Basketball Team (SCHS) was hoping to finish the regular season on a two-game winning streak and use that as momentum for the upcoming GHSA Region 5 A-Public Tournament with a victory at home over Chattahoochee County (CCHS). However, throughout much of the game, the Wildcats struggled to score against the Panthers and could not capitalize on opportunities down the stretch.

As a result, they fell to CCHS 39-36 in a low-scoring, defensive affair on Saturday, February 6, at Schley County High School. 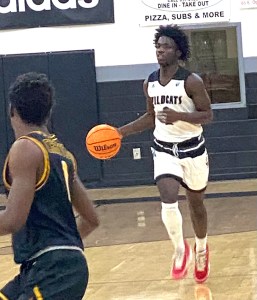 Schley County freshman point guard JaLewis Solomon directs the Wildcats’ offense against Chattahoochee County. Solomon led the Wildcats with 12 points in the loss to the Panthers.
Photo by Ken Gustafson

SCHS guard JaLewis Solomon led the Wildcats in scoring with 12 points, while Trypp Lumpkin, Zamon Ross and Dylan Taylor each scored six. Clinton Jackson scored four points and Casey Solomon chipped in two points to round out the SCHS scoring.

It was pretty much an evenly played first quarter between both teams, with the Wildcats leading 13-9 by the start of the second quarter. However, Lumpkin was able to extend the SCHS lead to seven points on a three-pointer early in quarter #2. 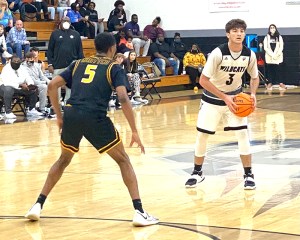 Schley County freshman point guard JaLewis Solomon directs the Wildcats’ offense against Chattahoochee County. Solomon led the Wildcats with 12 points in the loss to the Panthers.
Photo by Ken Gustafson

The Panthers responded by going on a 6-0 run, but Lumpkin drilled another three-pointer to put the Wildcats up 19-15. The Wildcats struggled to score in the waning minutes of the first half, while CCHS scored five unanswered points to take a 20-19 halftime lead in this low-scoring, defensive struggle.

The Panthers went on a 6-1 run to start the second half, but Dylan Taylor was able to drill his second three-pointer of the game to bring SCHS to within one at 25-24.

However, over the next few minutes, the Wildcats went scoreless. They tried to be patient on offense, but struggled against the stout man-to-man defense of the Panthers. While CCHS also wasn’t able to make a big run during this time, they were able to increase their lead to 30-24 with 1:48 to go in the third quarter.

Ross was able to break the scoring drought at that point with two made free throws, but the Panthers struck back when Naketa Ellington drained a three-pointer to put CCHS up 33-26.

The Wildcats held the ball for the last shot of the third quarter, but with 5.8 seconds left, Ross’s three-point attempt was off the mark and the Wildcats would go into the final quarter, trailing by seven.

During the first two minutes of the fourth quarter, the Wildcats were still struggling to score and were committing turnovers on the offensive end. SCHS went scoreless in the fourth quarter until Clinton Jackson scored on a layup for the Wildcats with a little less than five minutes to play. Fortunately for SCHS, the Panthers were struggling to score as well and SCHS only trailed 35-30 with 2:30 to go in the game.

However, with a little over two minutes left, the Wildcats showed some life when Ross threw a pass to Jackson, who scored on a layup to cut the deficit to three. That prompted CCHS to call a timeout with 2:08 left.

Out of the timeout, the Wildcats were able to force a turnover and Ross was fouled while shooting. He had the opportunity to bring his team to within one, but missed both foul shots. Nevertheless, there was still plenty of time left with 1:20 to go.

At the other end of the floor, however, CCHS guard Rico Daniels was fouled and he was able to make the one-and-one to give the Panthers a 37-32 lead, but the Wildcats responded, as Casey Solomon scored on the inside to bring SCHS back to within three at 37-34.

The game was going to cone down to who could make free throws, not commit turnovers and get defensive stops.

With a minute to go, SCHS trailed 37-34, but JaLewis Solomon scored on the inside to cut the deficit to one point. Then with 40.1 seconds left, SCHS Head Coach Ernest Scott called a timeout to settle his team down.

Out of the timeout, Ellington was fouled with 28.8 seconds left and made both free throws. The Wildcats quickly moved the ball up the court, but Ross couldn’t get his layup to go and the ball was almost tipped in by a CCHS player.

Ellington led CCHS in scoring with 18 points and Dexter Holloman scored eight in the winning cause.

The Wildcats will now turn their attention to the Region 5 A-Public Tournament coming up this week. The date, time, venue and the Wildcats’ first round opponent will be determined by Tuesday, February 9.