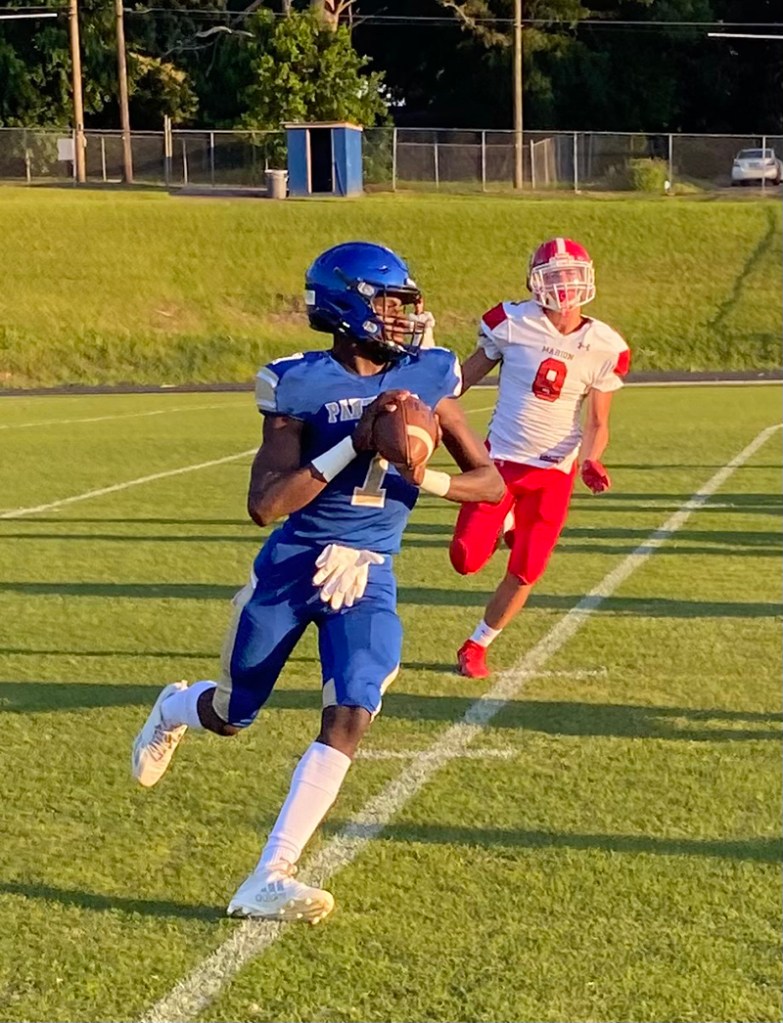 Sumter County HS Quarterback Cameron Evans is seen here competing in the Panthers' spring game back in May of this year. The SCHS Football Team is having to temporarily suspend football activities in the wake of a player having tested positive for COVID-19. ATR Archive

AMERICUS – The Americus-Sumter High School Football Team (ASHS) concluded its spring practices and sprung forward towards the upcoming 2021 season with their spring game against the Eagles of Marion County (MC). It has been two years since the Panthers, along with the Eagles and other teams around the state, took part in a spring game due to the COVID-19 Pandemic, which made it even more exciting for both teams. However, the Panthers fell behind early in the first half and struggled against the Eagles, particularly on offense. They were able to crawl their way back in the game in the fourth quarter, but still came up short. As a result, MC left Alton Shell Stadium with a 31-13 win over the Panthers in the ASHS Spring Football Game.

For ASHS Head Coach Ross Couch and his staff, the outcome of the spring scrimmage was not as important as evaluating players and seeing where they are at this stage and how they will fit in to various offensive and defensive concepts.

“We use spring as an evaluation tool for players, coaches, and concepts,” Couch said. “Obviously, there are of lot of things that we didn’t do well tonight, but we were able to get all of our guys on film working a lot of different concepts on both sides of the ball. Going into summer, that gives us explicit direction for our practices and workouts.” 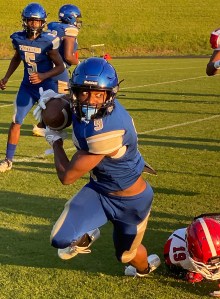 During the first half, both offenses struggled, but the ASHS defense made two big plays and they were both made by the same player. ASHS strong safety Anthony Tyson made two interceptions and one of them occurred down near the ASHS 17-yard line.

However, the Eagles were able to break the scoreless deadlock with a little over 11 minutes in the second quarter when quarterback Cameron King threw a 25-yard touchdown pass to Teddy Swanson. The extra point by Cecil Young was good and the Eagles enjoyed a 7-0 lead. 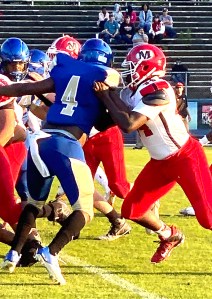 Americus-Sumter strong safety Kaddarius King (4) tries to shed a block. On offense, King caught a short pass and ran the ball 80 yards for a touchdown.
Photo by Ken Gustafson

The Panther offense still struggled to move the football in the latter part of the first half and it gave the Eagles the chance to add to their lead. With a little over two minutes left before halftime, Young kicked a 30-yard field goal to give MC a 10-0 lead and it stayed that way until halftime.

In the third quarter, the Panthers had a chance for a big play and a possible touchdown when quarterback Cameron Evans threw a long pass to Kaddarius King, but King was unable to make the catch. The Eagles would later take advantage as Cameron King scored on a 46-yard quarterback keeper. The extra point by Young was good and the Eagles increased their lead to 17-0. A few minutes later, MC added to its lead when King threw a short touchdown pass to Carmello Phillips. Young’s extra point was good and the Panthers found themselves deep in a hole, trailing 24-0. 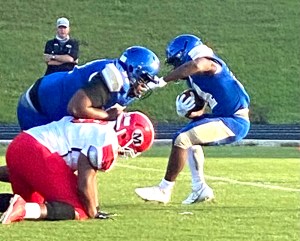 Americus-Sumter running back Jakory Wise carries the rock for the Panthers.
Photo by Ken Gustafson

However, the ASHS offense finally came to life as quarterback Kavon Lewis threw a short pass to Kaddarius King, who scampered 80 yards for the Panthers’ first touchdown of the night. The PAT was no good, but ASHS was on the scoreboard, trailing 24-6.

Then with a little over 11 minutes left in the game, the Panthers struck again when Evans found Tyson on a short pass. The soon-to-be sophomore wide receiver then scampered 44 yards for another ASHS touchdown. Mitch Herron came on to kick the extra point and made it, bringing the Panthers to within 11 at 24-13. 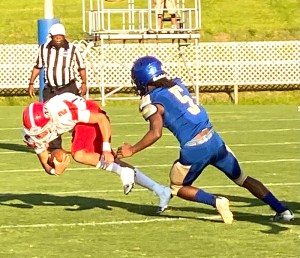 However, the Eagles responded on their next possession. On third and six from the ASHS 31, Phillips found some running room on the right side and ran the ball 31 yards for his second touchdown of the night. The extra point was good and once again, the Panthers found themselves trailing by 18 points at 31-13 with 8:16 to play.  ASHS was not able to make a run for a come-from-behind victory and went on to lose to the Eagles 31-13. 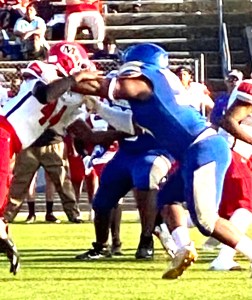 With spring practice now behind them, Coach Couch and his squad will now focus on getting better during the summer in preparation for the upcoming season. 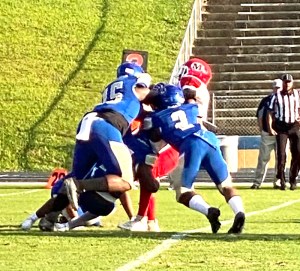