Multiple Lady Hurricanes chip in during win at Augusta University 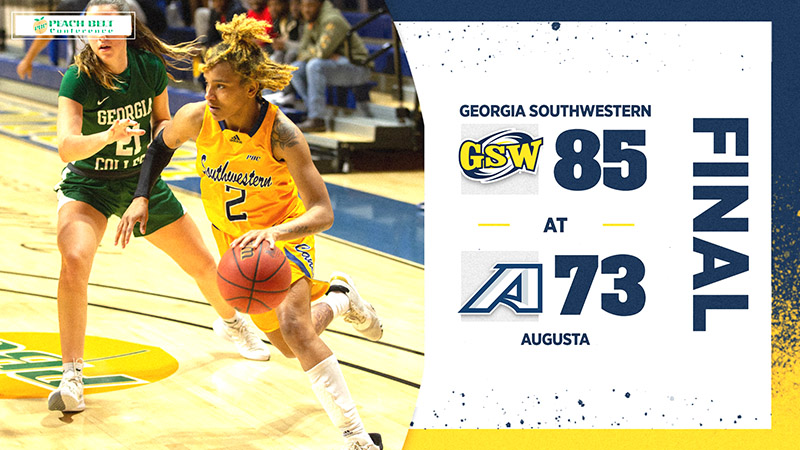 AUGUSTA — The Georgia Southwestern State University Women’s Basketball Team (GSW) defeated the Augusta University Jaguars 85-73 in a Peach Belt Conference matchup on Wednesday night, January 19 in Augusta, GA. The win was the Lady Hurricanes’ fourth straight victory this season and moves them to 13-2 on the season. The double-digit win was GSW’S 12th double-digit win out of 13 games.

GSW dominated from the opening tip, outscoring the Jaguars 20-10 in the first quarter alone and they were anchored by a nine-point run with 6:29 left in the opening quarter. The second quarter was closer than the first, with Augusta making a late run. That late run brought the game to halftime with GSW leading 39-23.

In the second half, the Lady Hurricanes seemed to take their foot off the gas and much of the second half an evenly played affair. Both teams scored 18 points apiece in the third quarter and the GSW kept its 16-point lead with one more quarter to play.

Both offenses came alive in the fourth quarter, scoring 60 points combined in just the final quarter alone. A run by Augusta brought the game to within 10, but the Lady Hurricanes answered and ended the game with a 12-point victory.

Multiple Lady Hurricanes contributed to the win, with five different double-digit point scorers. For the second straight game, Kayla Langley led GSW in points with 16 and both Jolicia Williams and Ava Jones followed up with 15 points each. For her play on the court, Williams earned Player of the Game honors. She is the fourth different player for GSW to earn that honor.

The Lady Hurricanes host #7 Lander University in a Peach Belt Conference matchup on Saturday night, January 22, with massive implications. Currently, GSW and Lander are both tied for second place in the PBC standings at 5-1 and they trail North Georgia, who is in first place at 7-0. The winner of Saturday’s game will have sole possession of second place in the PBC. Tip-off for Saturday’s game against the Lady Bearcats at the Storm Dome is scheduled for 1:30 p.m.