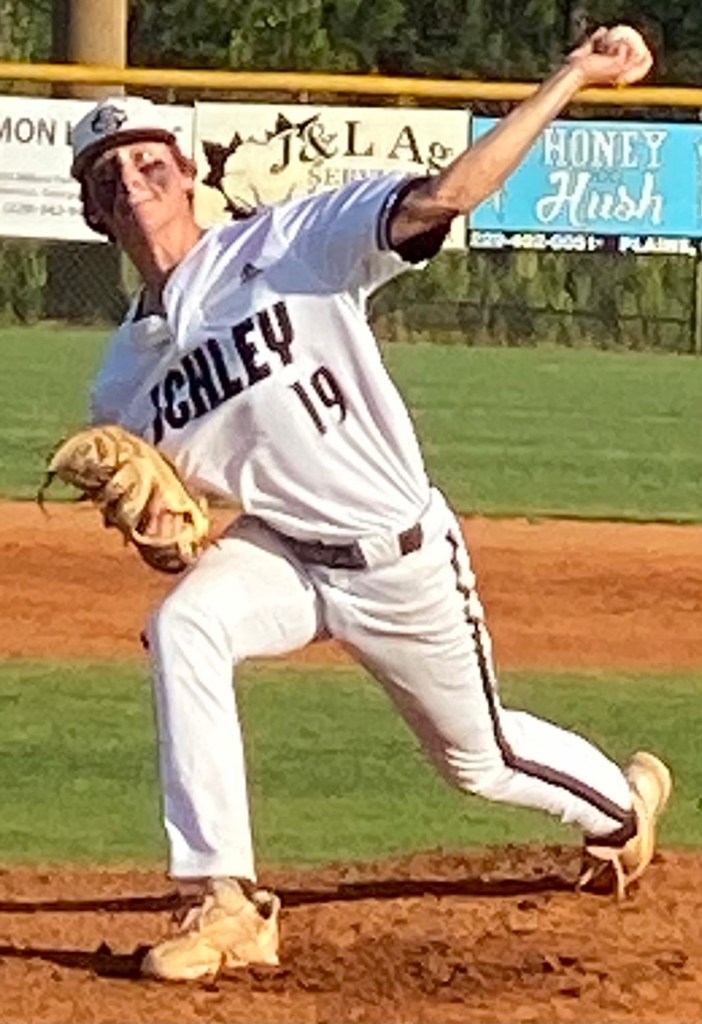 ELLAVILLE – The Schley County Wildcats (SCHS) suffered a 2-0 defeat to the Georgia School of Innovation & Classics (GSIC) in Game 1, but rebounded with a 3-0 victory in Game 2 on Friday, April 29, to force a third and deciding game to be played today at 2 p.m. at Wildcat Park in the first round of the Georgia High School Association (GHSA) Class A-Public State Playoffs.

The winner of Game 3 will advance to the second round and will play Claxton, who swept Seminole County 16-6 and 8-1.

In Game 1, the Wildcats (18-10) could not solve GSIC starting pitcher Hunter Justice. Justice pitched seven scoreless innings, giving up five hits and striking out nine SCHS batters to get the win. However, in Game 2, SCHS starting pitcher Owen Lamb returned the favor. Lamb pitched seven scoreless innings, giving up four hits and striking out four while walking one to get the win. 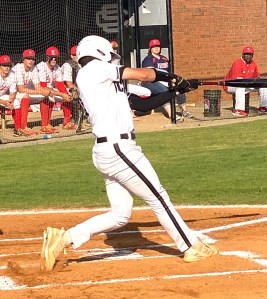 Schley County right fielder Trypp Lumpkin went 1 for 4 with an RBI double in Game 2 to help lead the Wildcats to victory.
Photo by Ken Gustafson

The Wildcats struggled offensively in both games. They could not plate a run on their five hits in Game 1 and only scored three runs on three hits in Game 2, but in Game 2, thanks to an RBI double from Trypp Lumpkin in the third inning, a fielder’s choice bunt by Carson Westbrook that allowed Cameron Barnes to score on an error in the fourth and a fielders’ choice bunt by Brody Fuller that allowed Westbrook to score on another GSIC error in the sixth, the Wildcats were able to tie the series at one game a piece with a 3-0 victory.

SCHS Head Coach Chuck Cheek was particularly pleased with how his team played defensively and was also complimentary of the defensive play of the Patriots.

“I think both teams played defensively a lot better than we’ve played throughout the season,” Cheek said. “They (GSIC) have kicked it around some and we certainly have. Both teams’ pitchers were really good. We gave them a couple of runs there (Game 1) and that was frustrating, but a lot of that is due to their pitcher (Justice) being really good and we didn’t square up enough balls. We had several opportunities. We had guys on base. We had guys in scoring position. We just couldn’t come through with the big hit. He (Justice) kept throwing the fastball up and elevating it.” 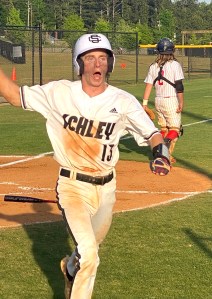 Cheek went on to say that he and his staff had a really good scouting report and that some of the staff went to watch Justice pitch the week before. “We kind of knew what he was going to do and we worked on it, but we didn’t do a good job of laying off the high fastball and he ate us up with it,” Cheek said. “In Game 2, us scoring early and getting that lead was key. Owen (Lamb) did a really good job staying competitive with all of his pitches and competing through at bats and getting guys out and really not giving them a lot of scoring opportunities.”

In Game 1, Trypp Lumpkin started on the mound for the Wildcats and pitched well in spite of the 2-0 defeat. In six innings of work, Lumpkin gave up two runs on three hits, but struck out nine Patriots while walking four. “Trypp really didn’t deserve to get the loss in Game 1,” Cheek said. “He absolutely pitched well enough to win. We’ve just got to do a better job at the plate. We still didn’t hit in Game 2 like we are capable of. Tomorrow (Saturday, April 30), we’ve got to hit better and we have to play defense like we did today. We’ve got to throw strikes like we did today and we’ve got to hit better if we are going to advance,” Cheek continued. 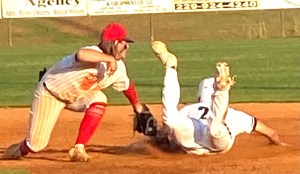 In the two games combined, the Wildcats committed a total of four errors, while the Patriots committed a total of three. Jack Clark tried to get the SCHS offense going in Game 1 as he went 2 for 3 with a double. However, in spite of five hits by the Wildcats, they could not score a run. The Patriots had a total of three hits in Game 1, with Justice going 2 for 2 at the plate. GSIC scored its first run in the top of the fourth when Drew Silas reached on an error that allowed Justice to score from third. Then in the top of the second, Logan James and Justice led off the inning with back-to-back singles. Then with runners at first and third and one out, James scored from third on an error.

In Game 2, Lumpkin went 1 for 4 with a double and an RBI and both Cameron Barnes and Carson Westbrook each went 1 for 3 with a run scored.

Drew Silas started on the mound for the Patriots in Game 2. In a little over three innings of work, Silas gave up two runs on two hits, walked four and struck out three.

Logan James came on in relief of Silas. In a little over three innings of work, he gave up a run on one hit and struck out five SCHS batters in the losing cause.

Today’s decisive Game 3 is scheduled for 2 p.m. this afternoon at Wildcat Park.