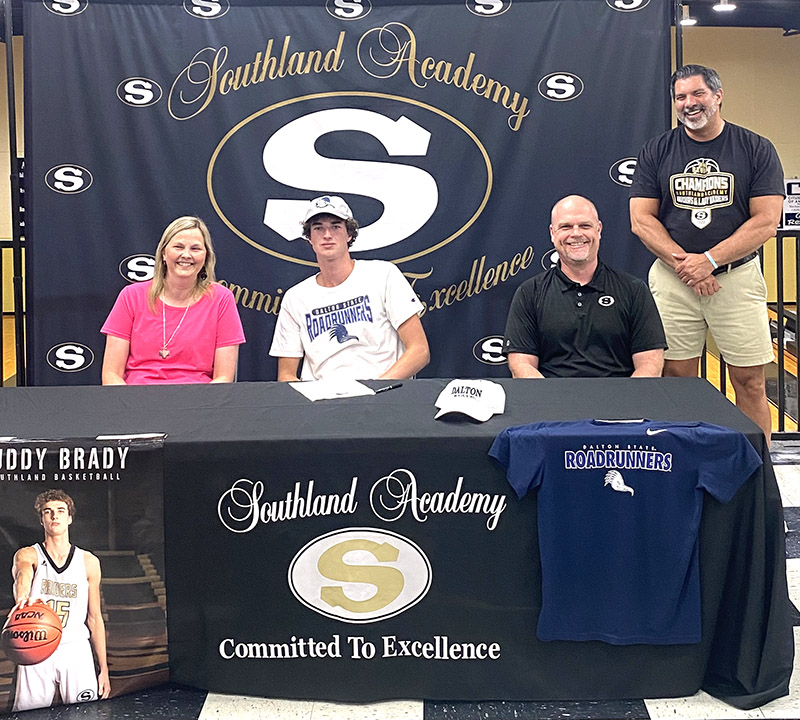 AMERICUS – On Monday, May 16, in front of a large crowd of teammates, coaches, family and friends, Southland Academy senior forward Buddy Brady signed his letter of intent to continue his education and play basketball at Dalton State College, an NAIA school located in Dalton, GA.

Brady garnered interest in basketball from Bryan College in Dayton, TN, where his former teammate, former Southland standout Max Foster, is currently enrolled. Brady was also recruited by South Georgia Tech, but when it came down to decide, he chose to play for the Road Runners.

A three-sport athlete at Southland, Brady excelled on the hard wood for the Raiders this year. He averaged 7.6 points per game, 7.8 rebounds per game and helped lead the Raiders to a 24-2 record and a GISA Class AAA Final Four appearance this past season. As a result of his production on the court, Brady earned All-Region honors as well.

“Buddy has really improved offensively from his junior to senior year,” Southland Boys’ Head Basketball Coach Rundy Foster said. “Defensively, he was our anchor. He helped solidify our defense with 35 blocks this year. We couldn’t have done as well defensively and we couldn’t have gone as far this year without him and his presence, especially on the defensive end. His length and his ability to step out on the perimeter and knock down shots helped as well.”

Foster went on to praise Brady for his work ethic throughout his four years at Southland. “Buddy Brady has been a very hard worker and he’s gotten to where he is now because of that,” Foster said. “It’s all been because he’s put in the time. He’s put in the effort. He’s really bought into what we’ve tried to accomplish here at Southland with our basketball program.”

Brady has also been an outstanding baseball player for the Raiders. His coach and father, Head Baseball Coach John Brady, said that his son has a little bit of a different personality than he does. “I think he’s pretty laid back and he has to be cut from a little bit of a different mold to put up with me because I’m pretty rough on him,” John Brady said. “I have to give him a lot of credit. He always handles things the right way. He doesn’t let a whole lot bother him, so he’s pretty even keel. It’s always important to have kids like that in your program. He’s always done a good job for us and I’m super proud of him and I’m looking forward to the next chapter.”

Brady plans to major in Business while in college and is undecided at this time as to what he would like to do after graduation.