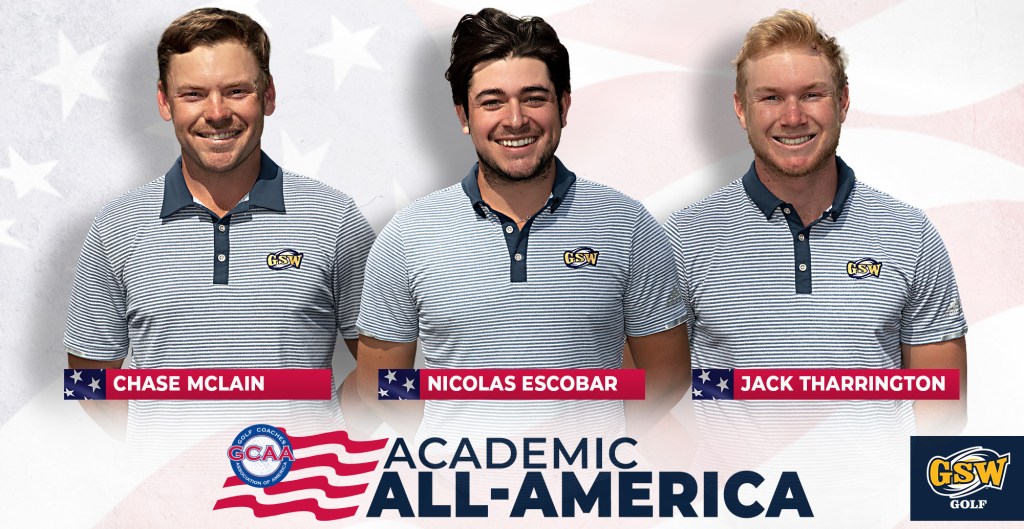 AMERICUS – Georgia Southwestern State University men’s golfers Chase McLain, Nicolas Escobar and Jack Tharrington have been named Srixon/Cleveland Golf All-America Scholars for the 2021-22 season as announced recently by the Golf Coaches Association of America. All three Hurricanes are first-time recipients of the honor.

McLain, a senior from Leesburg, Ga., completed his second full season with the Hurricanes while pursuing his master’s degree in business administration. McLain compiled a 73.77 scoring average over 35 rounds of competition in 2021-22. His best event this campaign was the NCAA Division II South/Southeast Regional played May 5-7 where he fired a 4-under 212 and tied for eighth place out of 108 golfers. McLain finished the year at No. 100 in the NCAA Division II individual rankings according to Golfstat.

Escobar, a sophomore management major from Guayaquil Ecuador, compiled a 73.24 scoring average over 29 rounds of competition in 2021-22. His best event of the season was the Hurricane Invitational played Feb. 28-March 1 where he compiled a 3-under 213 and tied for fifth place out of 90 golfers. Escobar finished the year at No. 67 in the NCAA Division II individual rankings according to Golfstat.

Tharrington, a sophomore marketing major from Boca Raton, Fla., compiled a 74.19 scoring average over 26 rounds of competition in 2021-22. His best event of the season was the Hurricane Invitational where he shot a 1-under 215 and tied for 10th place out of 90 golfers. Tharrington finished the year at No. 103 in the NCAA Division II individual rankings according to Golfstat.

To be eligible for Srixon/Cleveland Golf All-America Scholar status an individual must be a sophomore, junior or senior academically in Division I, II, III, and NAIA, or receiving their Associate’s Degree and in their last year of athletic eligibility in the NJCAA. In addition, they must have participated in 40 percent of their team’s competitive rounds for the shortened 2019-20 season, have a stroke-average under 76.0 in Division I, 78.0 in Division II, 78.0 in NAIA and 79.0 in Division III, 77.0 in NJCAA, and maintain a minimum cumulative career grade-point average of 3.2. A recipient must also be of high moral character and be in good standing at his college or university.

The GSW trio was amongst the 183 student-athletes to earn the award in NCAA Division II.